At Art Basel’s 2021 Miami Beach show, BMW M GmbH is presenting an expressive new vehicle concept on the global stage for the first time. The BMW Concept XM looks ahead to the most powerful BMW M car ever to go into series production, which is set to begin at the end of next year. At the same time, the BMW Concept XM shines the spotlight on standout aspects of the M brand. Electrification underpins an extraordinary driving experience which allows the driver to both glide along in near silence and enjoy the time-honoured pleasure of high performance, M-style. The BMW Concept XM provides a first glimpse of the new front-end design for BMW’s forthcoming luxury-class models. It will also introduce its audience to a highly progressive and distinctive take on BMW X model design and an all-new form of luxury and sense of space for the interior.

The series-production model – the BMW XM – will be built from the end of 2022 at BMW Group Plant Spartanburg in the USA, the most important sales market for the new high-performance car. BMW M will therefore be introducing its first standalone vehicle since the legendary BMW M1 in the year it celebrates its 50th anniversary.  The BMW XM will be available in plug-in hybrid form only and exclusively as an M model.

The bold exterior styling of the Concept XM reflects the car’s exceptional performance attributes: dynamism, agility and precision, plus an all-electric range of up to 80 km. The newly developed M Hybrid drive system in the BMW Concept XM brings together a V8 engine and a high-performance electric motor to develop maximum output of 550 kW/750 hp and peak torque of 1,000 Nm (737 lb-ft). The first electrified vehicle from BMW M GmbH in the high-performance segment is therefore pointing the way for the future of the brand.

“The BMW Concept XM represents a complete re-imagining of the high-performance car segment,” says Franciscus van Meel, CEO of BMW M GmbH. “It underlines the ability of BMW M GmbH to break with established conventions and push boundaries in order to offer fans of the brand the ultimate driving experience. The series-production car – the first pure BMW M model since the legendary BMW M1 – also shows how we are approaching the step-by-step electrification of our brand.”

BMW M goes its own way in the luxury segment.
The BMW Concept XM sees BMW M GmbH forging a distinctive path in the luxury segment. The car’s exterior majors on presence and extrovert appeal. Inside the car, a special take on the driver-focused cockpit for which M models are renowned meets an all-new rear compartment design: with its high-comfort seats and illuminated, sculptural headliner, the M Lounge offers passengers a luxurious retreat.

“The design of the BMW Concept XM is an extravagant statement by BMW M in the heart of the luxury segment,” says Domagoj Dukec, Head of BMW Design. “It has a unique identity and embodies an expressive lifestyle like no other model in the BMW line-up.”

The front end: progressive design for maximum presence.
The BMW Concept XM debuts the new, progressive front-end design for BMW’s luxury-class models, a version of which will be seen for the first time in 2022 as part of the BMW model offensive in the luxury segment. The headlights have been split into two separate modules, a new design feature which creates a visually arresting appearance. The daytime driving light signature in the sharply styled, slim upper module is particularly eye-catching. The horizontal kidney grille sits boldly between the headlights and tapers towards the outer edges, producing a near-octagonal outline that emphasises the front end’s dynamic character. The black kidney grille elements are enclosed within an intricate surround and appear almost to be floating freely within a High-gloss Black surface. M-style double bars within the grille add to the perception of width. Eye-catching contour lighting sets off the grille to fine effect, ensuring the striking composition of kidneys and daytime driving lights is immediately recognisable in the dark as well. The new XM logo in the kidney grille and the large air intakes hint at the power of the V8 engine, which teams up with the electric motor to form the M Hybrid system.

M-specific details point to compromise-free performance.
The glasshouse of the BMW Concept XM rises up vertically, accentuating the front end’s strong, imposing feel. The colour of the roof contrasts with the black finish of the A-pillars. The windscreen seems to have an even heavier rake as a result, injecting modern dynamism into the front end. Slim LED searchlights have been incorporated into the roof above the A-pillars. The boldly sculpted bonnet extends the contours of the kidney grille back in the form of two power domes. A pair of air intakes in the bonnet mimic the appearance of the LED searchlights in the roof and add extra dynamic flair. Framing the statuesque body at its lower edge are the clean-cut black surfaces of the front apron. Triangular body-coloured blades at the outer edges accentuate the vertical air intakes while emphasising the sporty and robust stance of the BMW Concept XM.

The side view: an expression of unbridled dynamism.
The powerful and heavily contoured proportions of the BMW Concept XM highlight the car’s resolutely standalone identity and draw the eye to the coupé-like character of the body. The visually striking front end, long bonnet and stretched, sloping roofline present a characterful two-box design with a distinctive outline. The window graphic narrows significantly as it approaches the rear, enriching the dynamism of the side view.

The two-tone paint finish of the BMW Concept XM further accentuates its distinctive lines: the upper section is in matt gold-bronze, while the lower section sports the Space Grey metallic shade. Below the window graphic, a broad, High-gloss Black line – the “black belt” – separates the two exterior colours. The signature M exterior mirrors give the car a clean-cut and technical, sporty edge. The charging flap rearwards of the front-left wheel is a reminder of the M Hybrid drive system at work.

Throughout the side view, deliberately short character lines, which start off boldly before fading softly, accentuate the car’s agile, modern feel. The expressive rear lights extend well into the car’s flanks and create an eye-catching transition into the rear. The black cladding typical of BMW X models above the wheels and on the side skirts is very clearly defined and gives the body an elevated appearance. The elongated body sits on 23-inch light-alloy wheels, which bring extra power and solidity to the side view.

The rear : powerful stature and newly interpreted design.
The design of the rear end likewise accentuates the car’s powerful stature, and the BMW Concept XM cuts a low and sporty figure from this angle. The rear window is inserted almost seamlessly into the rear end. The fresh interpretation of the design can also be seen in the arrangement of the BMW logo, which is laser-etched into the window below each of the two cant rails. This is a stylistic reference to the BMW M1, to date the only example of a standalone model developed exclusively by BMW M GmbH.

Lower down at the rear end, prominently flared wheel arches draw attention to the car’s powerful stance on the road. Extremely slim and boldly L-shaped rear lights extending across almost the entire width of the rear add to the effect. The lights themselves have a dark appearance when not active, giving way to a precise and uniform shade of red when switched on. Dominating the rear apron are the characteristic twin tailpipes of BMW M models. The dual-branch, twin-tailpipe exhaust system employed here reduces backpressure for the V8 engine and also generates the emotionally rich M-typical soundtrack accompanying the engine’s imposing power delivery. The vertical arrangement and hexagonal interpretation of the tailpipes breathe new life into this classically iconic feature.

The BMW Concept XM embodies an expressive new vehicle concept: a zero-compromise BMW M with striking BMW X design language.
The new, progressive front-end design of BMW’s forthcoming luxury-class models can be seen for the first time on the BMW Concept XM. The slim and iconic daytime driving lights and the eye-catching contour lighting of the kidney grille are the main focal points.
The series-production model – the BMW XM – will be produced from the end of 2022 at BMW Group Plant Spartanburg in the USA, the most important sales market for the new high-performance model.
BMW M GmbH will therefore be presenting the first standalone M model since the legendary BMW M1 in the year it celebrates its 50th anniversary.
The BMW XM will be the first electrified high-performance model in the BMW M portfolio. It will be available as an M Hybrid only.
The newly developed M Hybrid drive system combines a V8 engine with a high-performance electric motor. It generates maximum output of 550 kW/750 hp and peak torque of 1,000 Nm (737 lb-ft).
The drivetrain enables an all-electric range of up to 80 km. The first electrified vehicle from BMW M GmbH for the high-performance segment therefore points the way for the future of the M brand.
Vehicle design: Bold, robust and new – the expressive design of the BMW Concept XM represents an emotionally potent statement beyond all norms and conventions.
Exterior design: The impactful exterior design forms a visually expressive silhouette that exudes presence. The strikingly sculpted surfaces and extravagant lines create a unique design language.
Interior: With its exclusive materials and the luxurious M Lounge in the rear, the cabin reflects the groundbreaking character of the BMW Concept XM. The sculptural, illuminated headliner is a special highlight that gives the spacious rear compartment a sense of extravagance.

Testing the BMW i7 drive under extreme conditions 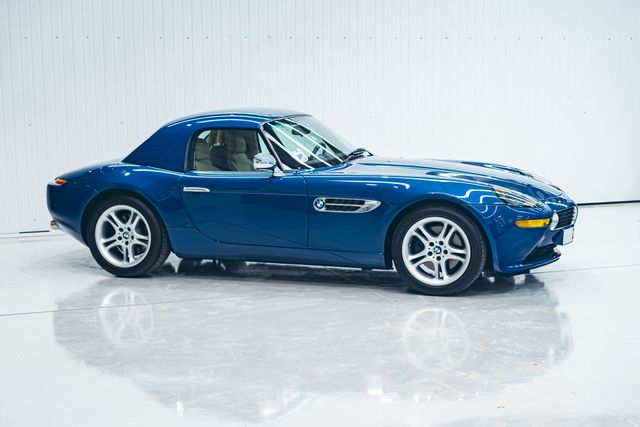