A cornerstone in the history of Mercedes-Benz chronology
The second of two adaptations of the race-built 300 SLR made in coupé form
The creation of pioneering Mercedes-Benz designer, Rudolf Uhlenhaut, earning this car its 300 SLR ‘Uhlenhaut Coupé’ nickname
A masterpiece of innovative 1950s motorsport engineering and technology
Comfortably the fastest road-going car in the world when new, capable of reaching speeds of up to 290 km/h
Restored by the acclaimed technician and race preparation specialist, Tony Merrick, in 1986
Retained by Mercedes-Benz from new and presented for sale for the first time ever
A once-in-a-lifetime opportunity to own an enthralling piece of automotive history

At the height of its most successful period of racing dominance in the 1950s, Mercedes-Benz could hardly be stopped. The German outfit made a Formula 1 Drivers’ Champion out of Juan Manual Fangio on consecutive occasions in 1954 and 1955, while teammates Hans Hermann, Karl Kling, and Stirling Moss each demonstrated they were more than capable of stepping onto the F1 podium from behind the wheel of the peerless W196 team car. Away from Formula 1, Mercedes-Benz demonstrated its assured capability in all forms of racing, ably proven by Moss, who drove the open-top 300 SLR to legendary victories at the Mille Miglia, Targa Florio, and RAC Tourist Trophy in 1955. In the wake of this runaway success, the famous marque’s involvement with racing would end abruptly following the tragic 1955 edition of Le Mans.

The influence of one man in shaping the trajectory of Mercedes-Benz in the fallout of the 1955 Le Mans tragedy cannot be underestimated. Rudolf Uhlenhaut, employed as a designer and engineer at the Stuttgart marque since 1931, had led research on many of the most evocative Silver Arrows of that era from the Grand Prix-conquering W196 and other F1 cars before it, to the utterly dominant open-top 300 SLR.

In particular, Uhlenhaut’s 300 SLR won acclaim as a highly competitive car, typifying the development capabilities and strength of racing cars made by Mercedes-Benz. While it would bear a strong visual resemblance to two of Uhlenhaut’s other noteworthy designs—namely the W194 that won in Le Mans in 1952, and the 300 SL Gullwing that at that time was being prepared in road-going specification for series production—the underpinnings of the 300 SLR were most closely connected to the W196 that propelled Mercedes-Benz to F1 success in 1954 and 1955.

Similarities between the 300 SL and 300 SLR could be made by name, though the “Rennsport”—or racing—addition to the nomenclature hints at the intention to perform. The monoposto layout of the W196 was adapted to allow space for two seats in the open-top 300 SLR, further to the addition of headlights, while engine displacement was increased to 3.0-litres, and other subtle tweaks were made to move the model away from the stripped-back nature of Grand Prix racing, with a view to competing in long and gruelling endurance events.

The withdrawal from motorsport by Mercedes-Benz after the Le Mans crash meant that Uhlenhaut’s role had changed, taking emphasis away from the engineering of competition machines and instead focussing on series-production models as Head of Development for Passenger Cars—though he did retain the remit of overseeing racing car production. Even though no cars were campaigned competitively, Mercedes-Benz would go on to become renowned for its sports car designs.

Campaigned by the Works team of Mercedes-Benz as an out-and-out racer, the competition-spec 300 SLR was almost instantly rendered redundant after the crash at Le Mans forced the company’s hand. The rolling chassis that were left did not go to waste, however. Uhlenhaut had already begun plans for a tin-top version of the 300 SLR—even before the incident at Le Mans—instructing that two cars be built based on the W196 chassis, with the intention of competing in the Carrera Panamericana. The firm’s unexpected departure from top-flight racing quashed any plans for production of the 300 SLR coupé on a greater scale, but allowed Uhlenhaut to transform the now-stillborn SLR Coupé project from the toughest endurance racing car into the greatest prototype road car the world had ever seen.

Remarkably, Uhlenhaut would go on to develop two of the W196-based 300 SLR mulo rolling chassis as road-going cars. Beneath its skin, the 300 SLR in coupé form was clearly derived from a racing car. Its uncompromising driving position, accessed via the innovative “gull wing” doors, forced occupants to fold themselves into position—most drivers having to remove the quick-release steering wheel to fit inside. Just like the F1 car, the mechanical workings of the 300 SLR dominate its interior space, with pilots straddling a large drivetrain tunnel with pedals on either side.

Inboard drum brakes are accommodated in the engine bay, to help reduce unsprung weight. The accelerator pedal is dressed in leather to reduce foot slippage while driving. A heating system is as rudimentary as a hinged flap on the engine firewall that allows heat to escape from the engine bay and into the cabin. A large fuel tank fills the boot, crowned by two spare wheels—surely the sign of a racing car fit to do battle over great distances. The weight of the 300 SLR ‘Uhlenhaut Coupé’ was rated at just 998 kg from the factory—an incredible feat of engineering, made possible by extensive use of ultra-lightweight “Elektron” magnesium material for the bodywork.

The 3.0-litre, front-mounted, straight-eight engine connects to one of the car’s most distinguishing features: twin exhausts that exit via side-mounted gills positioned halfway across the length of the 300 SLR. Upon firing into life, the engine roars through these near-unsilenced pipes, and it is said that Uhlenhaut became hard-of-hearing in later life because of the noise of his fearsome coupé creation. Indeed, the English-born designer was hardly shy when it came to driving the car. Of the two made, he assumed ownership of one to use as his company car. Uhlenhaut would drive the 300 SLR regularly, and it is said that—running late for a meeting—he made full use of the 300 SLRs performance on the autobahn, covering roughly 230 km between Stuttgart and Munich in under an hour.

This hugely significant machine is the second of only two examples of the ‘Uhlenhaut Coupé’ ever made. Initial construction took place in December 1955, then six months later an Eberspächer silencer was installed. One week later, on 29 June 1956, the car was deemed ready to drive. Incredibly, it has been retained by Mercedes-Benz since the first time it left the factory. In the earliest years of its existence, the car served to fulfil demonstration drives around Europe with dignitaries such as the Duke of Kent and Lord Brabazon, and is known to have been used by the company in the U.S.A. between 1961 and 1963. From the mid-1960s onwards, the 300 SLR was exhibited by Mercedes-Benz at numerous events.

Between January to July in 1986, the car was sent to Tony Merrick, one of the pre-eminent historic vehicle restorers and race preparation specialists of his era. Full correspondence between Mr Merrick and Mercedes-Benz is documented on file, together with invoices for the work, further to a Technical Condition Report carried out by Mercedes-Benz in 2022.

Following the restoration work, the car attended the Oldtimer Grand Prix at the Nürburgring in August 1986, before appearing in a feature article in Road & Track magazine, later appearing at the Geneva International Motor Show in 1988. Extended display at a number of noteworthy museums followed, with the occasional appearance at high-level motorsport and concours d’elegance events, including outings at the Goodwood Festival of Speed, the 1999 German Grand Prix at Hockenheim, and the Pebble Beach Concours d’Elegance in 2001, as well as appearing in the Mercedes-Benz SLR McLaren brochure when launched in 2003. Chassis 196.110-00008/55 boasts a long and storied list of appearances at many official Mercedes-Benz events, always heralded by the manufacturer as a significant milestone in its history, and at the forefront of the marque’s global marketing

Now offered for private auction for the first time, the incomparable significance of this Mercedes-Benz positions it among the most important automobiles ever offered for sale. The once-in-a-lifetime opportunity to acquire this piece of Mercedes-Benz history cannot be overlooked. Its stunning shape, innovative period features, and fearsome performance will be enough for most to appreciate this car as an all-time legend of automotive design—and its incredible history only adds to its appeal. No other 300 SLR exists in private hands and the chance to acquire such a car, direct from years of company ownership, will surely never be repeated. 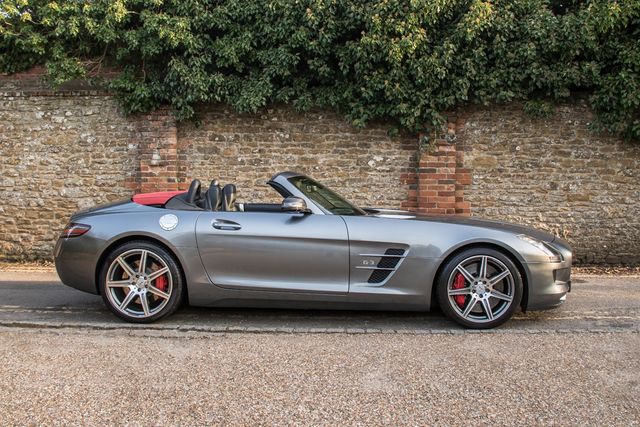