The 18th of 19 examples built; widely considered the most beautiful of the Testa Rossa designs
Raced at the 1957 24 Hours of Le Mans by Richie Ginther and François Picard
Driven to 12 overall or class victories by racing legend Gaston Andrey en route to the 1958 and 1959 SCCA E-Modified championships
Exceptionally long and successful racing career across at least 30 starts between 1957 and 1963, with 18 podium finishes
Currently fitted with matching-numbers engine

Highly eligible for the world’s most exclusive events across racing, rally, and concours, including the Mille Miglia Storica and Le Mans Classic

Though he is best remembered for designing the long-block V-12 engine that Ferrari rode all the way to a victory at the 1954 24 Hours of Le Mans, engineer Aurelio Lampredi was also responsible for a very successful four-cylinder motor. The mainstay of Ferrari’s dominating 1952 and 1953 World Drivers’ Championships in Formula Two competition (the years during which Formula One was essentially canceled due to a lack of competition), this engine was soon transposed to sports car racing, powering the 500 Mondial and 750 Monza models to numerous wins. The engine’s strengths were particularly evident on shorter winding circuits, where the high-revving, lightweight motor could power through the turns, often leaving V-12-powered competitors in the dust.

After Lampredi’s exit in 1955, a new engineering team led by ex-Alfa Romeo maestro Vittorio Jano was charged with developing the four-cylinder engine even further, and their work most auspiciously featured the fitting of a new cylinder block that was finished in gloss red paint. This marked the inception of the mighty Testa Rossa, a model that would ultimately be fitted with a red-head V-12, and go on to become arguably the most legendary sports racing prototype series of all-time.

The 500 TR made its debut at the Senegal Grand Prix with Jacques Swaters’ Ecurie Francorchamps racing team, achieving immediate success with a 1st in class. The majority of the subsequent examples were bodied by Scaglietti and destined for Ferrari’s top privateer clients, while a small handful were upgraded to 2.5-liter engines and bodied by Touring for use as Scuderia Ferrari Works cars. It was two of the latter examples which achieved the model’s first major international success when they finished 1st and 3rd at the 1956 Supercortemaggiore Grand Prix at Monza. Success continued throughout 1956 with the new “Red Head” achieving over 30 class and overall victories across North America and Europe.

For 1957, the 500 TR was updated to comply with the FIA’s latest Appendix C regulations, and the model was duly renamed the 500 TRC. Three inches lower than its predecessor, the TRC utilized a conventional engine-mounted four-speed gearbox and a live rear axle, eschewing the heavier De Dion rear end employed in the 500 Mondial. With stronger connecting rods and crankshaft assembly, and a lighter flywheel, the type 131C engine was fed by two Weber 40 DCOA/3 carburetors, combining to develop 190 horsepower and good for a potential top speed of 153 mph. Developed exclusively for privateer racing clients, the 500 TRC went on to collect class wins at the 24 Hours of Le Mans, the Mille Miglia, the 12 Hours of Sebring, and the Nürburgring 1000 KM.

The 500 TRC was built in a boutique quantity of just 19 examples, and it was the last four-cylinder model that Ferrari ever produced. Of course, with its sensuous Scaglietti open body and marvelous motor, it proved to be just the opening salvo of the Testa Rossa legend—but what a memorable first chapter it was.

Campaigned to numerous wins by a luminary racing driver lineup, this beautiful 500 TRC is a highly desirable example of the early Testa Rossa. Slotted in at the end of the production run, 0706 MDTR is the second-to-last car built and in April 1957 it was loaned by the factory to François Picard, who repainted the car French blue and raced it under the banner of his Ecurie Los Amigos. After scoring three class wins through early June, including 5th overall at the Portuguese Grand Prix, Picard teamed with rising star Richie Ginther to run the 24 Hours of Le Mans. Despite showing early promise in the race, the TRC retired following a water pump failure.

In late 1957 the Ferrari was sold through Luigi Chinetti to Mike Garber of Hamden, Connecticut, the sponsor of the legendary Swiss-born racing driver Gaston “Gus” Andrey. Having emigrated to the United States, Andrey went on to enjoy a very successful career that included four SCCA championships and two Trans-Am championships, driving for Ferrari’s NART, Maserati, and Alfa Romeo, among others.

Still finished in its Le Mans blue livery, Andrey first drove the beautiful 500 TRC at the Nassau Bahamas Speed Week in December 1957. Andrey failed to finish the Tourist Trophy event but came back strong with a 2nd in class in the Governor’s Trophy prelim race and a respectable 5th in class in the hotly contested Nassau Trophy race. Following Nassau, the car remained in the Southeast and was entered by Mike Garber in the 1958 12 Hours of Sebring. Driven by Andrey, Bill Loyd, and for a short stint the great Dan Gurney, the car ran well until the 125th lap when it suffered a rear axle bearing failure.

Following Sebring, the car was refinished in a two-tone scheme of white over a red lower body, a red stripe, and Swiss emblems on each side, paying homage to Andrey’s Swiss heritage. 0706 MDTR was driven by Andrey in a slew of races through 1959, earning him the SCCA E-Modified championships in 1958 and 1959. Almost always among the top 10 finishers, the car claimed an overall win at Lime Rock in April 1958, and a class win at the 1958 President’s Cup at Marlboro, Maryland. It also won its class at Bridgehampton in June 1958, Virginia International Raceway in October 1958, Thompson in May 1959, and Lime Rock in July 1959.

The Ferrari’s success prompted a fair amount of coverage in the motoring press, including a piece in the October 1959 issue of Road & Track, and cover car status for the January 1960 issue of Sports Car Graphic. In early, 1960 Andrey offered the TRC for sale, and over the next two decades it passed through a documented chain of owners across the United States.

In the early 1960s, while driven in a racing school by Henry Hironaka, the original 2-liter engine number 0706 MDTR dropped a valve and was removed from the car. For a time 0706 MDTR, as with many used Ferrari racing cars of the period, had a Ford 289 V-8 motor installed to keep it operational. Later, the Ford engine was removed and a new 2-liter engine, stamped with the number 0582 LM, was installed.

In May 1980 Stanley Nowak found the original 0706 MDTR engine crated within Luigi Chinetti’s warehouse, and he soon sold it to Derek Lees in Birmingham, England, who installed it in the restoration of a 500 TR, chassis number 0640 MDTR.

A RETURN TO THE CIRCUIT

In 1984, the 500 TRC was purchased by Count Hubertus von Dönhoff in Germany, and over the following 10 years he entered the car twice at the Mille Miglia Storica and three times at the AvD-Oldtimer Grand Prix at the Nürburgring. By 1995 the Ferrari was back in the U.S. and proudly displayed at the 1995 Cavallino Classic, winning the Coppa per Quattro Cilindri for the best four-cylinder Ferrari.

Now offered from the Oscar Davis Collection, this sensational spider continues to benefit from an older restoration. It claims important competition use, having been driven by Richie Ginther at the 24 Hours of Le Mans and by Gaston Andrey at the 12 Hours of Sebring—also forming the primary component of his 1958 and 1959 SCCA championships.

Simply awe-inspiring in its menacing red-over-black Scaglietti coachwork, this striking 500 TRC would make a great entrant at significant marque events or may be enjoyed at vintage racing gatherings like the Mille Miglia Storica, Le Mans Classic, or the Monterey Historics, in addition to the world’s top concours d’elegance. The voluptuous coachwork instantly declares the car’s position in the evolution of a celebrated legend, that sports-car racing masterpiece forever known by two words: Testa Rossa. 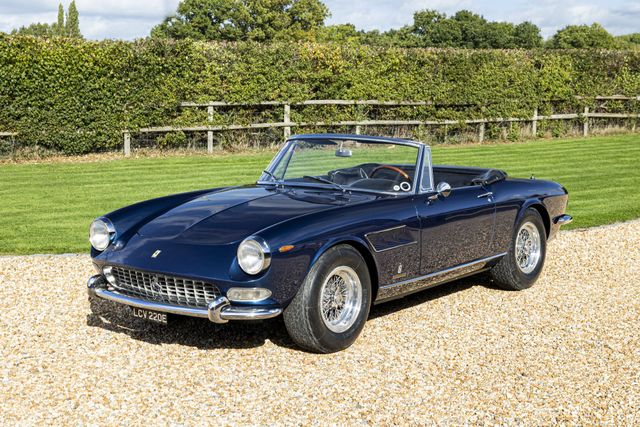