The F40 is a Ferrari thoroughbred for the track, thinly disguised as a road car. Its spectacular visual presence and breathtaking performance still strike awe in the hearts of car enthusiasts 35 years after being unveiled in Maranello on July 21, 1987. It is entirely fitting that this sensational automobile was the final project overseen by Enzo Ferrari before his passing on August 14, 1988.

The F40 owes its existence to the 288 GTO Evoluzione, which was developed to compete in FIA Group B rallying against its archrival from Stuttgart, the Porsche 959. When the series was canceled, Maranello chose to redirect the Evoluzione’s development toward the creation of a transcendent, road-going supercar to celebrate the marque’s 40th anniversary. In doing so, Ferrari elected to go in an entirely different direction from the state-of-the-art Porsche, eschewing avant-garde technology in favor of absolute simplicity, brute power, and weight savings at all costs.

The Leonardo Fioravanti-designed Scaglietti body was constructed entirely of Kevlar, carbon fiber, and Nomex®, a first for any road car. The side and rear windows were Plexiglas, and the engine cover was slotted to allow heat to escape from its mid-mounted power unit. There were no power windows, locks, or even door mechanisms, just a wire pull cord to open the door. Inside, there was no leather or carpet, just raw carbon fiber floors, cloth-covered composite shell seats with a felt-covered dash and tunnel. The driver was greeted by a simple, three-spoke MOMO steering wheel and drilled aluminum pedals. Neither steering nor brakes were power assisted. There was no radio, glove box, or arm rests – just a traditional, gated shifter to command the five-speed transaxle.

When it was introduced, the automotive press was astonished by the F40’s performance. Magazines reported a 0–60 sprint in 3.8 seconds, elapsed quarter-mile times of 11.8 seconds at 124.5 mph, 1.01 Gs on the skidpad, and 70–0 stopping distances of 218 ft. Meanwhile, Ferrari reported achieving a top speed of 201 mph, a first for any road car. As impressed as they were by the car’s performance, it was the F40’s minimalist approach and visceral driving experience that truly won the day. Initially, Ferrari planned to build 400 examples worldwide; however, demand was so great that 1,311 were built.

Completed on October 30, 1990, this F40, chassis 87041, is the 77th of just 213 examples built for the US market. According to factory records, this car was destined for Ronald Budworth of Vancouver, British Columbia, but it is not known if he ever took delivery of the car.

In 1993, this car was retailed through authorized dealer Walnut Creek Ferrari and sold to its first known owner, Ferrari collector Bob Scholefield of Ventura, California. Mr. Scholefield kept the car for the next 14 years, drove it fewer than 500 miles, and then sold it to Hawaii-based developer David E. Walters. During his ownership, Mr. Walters drove the F40 sparingly, and kept it in his Burbank, California garage alongside other notable Ferraris, including an F50, Daytona Spider, and 500 Superfast.

In August 2008, the low-mileage F40 was sold at auction to lottery winner Steven M. White for what was then a world-record price. Mr. White had his F40 serviced by Ferrari of Tampa Bay, Florida, and certified by Ferrari Classiche in 2011, with the accompanying Red Book confirming that 87041 retains its original chassis, body, engine, gearbox, and other major components.

In 2013, the F40 was sold to British golf pro and Ferrari collector Ian James Poulter, who commissioned Ferrari of Central Florida to perform an engine-out service at approximately 1,300 miles, as documented by invoices on file.

The current owner acquired the F40 in 2018, and had his in-house, Ferrari-trained technician perform a thorough service and detailing in preparation for Platinum-level concours judging. Completed in fall 2021, this process included reconditioning the fuel injectors, cleaning the throttle bodies, rebuilding the braking calipers, overhauling the air-conditioning system, and detailing the entire car to the highest standards.

This detail-oriented effort was rewarded at the Ferrari Club of America Annual Experience in November 2021, where the F40 received four of the club’s most prestigious honors. Not only did 87041 receive a Platinum award, with a perfect 100-point score in judging, it also earned Coppa Bella Macchina and Outstanding Supercar awards. Above all, this magnificent F40 was honored with the coveted Coppa GT award, which requires that a car earn both Platinum and Coppa Bella Macchina awards, and further demands that the driver demonstrate competency, proficiency, and knowledge on the racetrack. At each annual meeting, just three cars are eligible to receive the FCA’s exclusive Coppa GT award.

At the time of cataloguing, the odometer displayed just 1,832 miles, and the car presents in exceptional condition in all respects. The hallmark characteristics of a well-kept F40 are visible on the car, from the factory-original ID and data plates, down to the correct US country-code markings on the suspension arms.

The Scaglietti body number (75) is present on both door hinges, as well as the front and rear clamshells, and even the fuel filler doors are correctly engraved with “DX” and “SX” markings.

A multiple-award-winning, low-mileage example with a well-documented history from new, this outstanding US-specification F40 is among the most rare, exciting, and best-performing sports cars of its era; its impeccable credentials are sure to impress even the most discriminating collectors. Gooding & Company is proud to offer this truly exceptional Ferrari supercar for public sale. 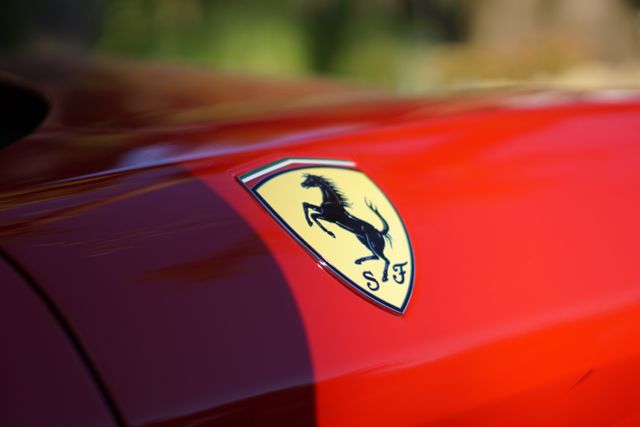