To be held at the National Motorcycle Museum, Solihull, West Midlands - Wednesday 7th December from 11am. Viewing from 9am

Vintage scooters already consigned into the auction include

This is the actual scooter displayed in the Chelsea museum at Stamford Bridge before the conversion to digital exhibits.
Scooter signed by many of the players of the 2004-2005 season
Of major interest to sports memorabilia, scooter, England and Chelsea Football collectors. A fantastic addition to a collection.
Runs and has UK V5 for use on the road
Complete and in very good general condition
Correct chassis and engine numbers for the model
A fully working and well maintained scooter

In celebration of the first Chelsea FC league title in over 50 years and the League Cup, ’The Special one’ was created in 2005 to pay homage to the club and the players who made this dream come true for Chelsea fans.

The manager, players and owner and players were all painted onto the scooter by top mural artist Si Clark. There we can see portraits of Jose Mourinho, Roman Abramovich, Frank Lampard, Didier Drogba, Petr Cech, Paulo Ferreira, John Terry, Joe Cole and several others and most of these players have actually signed the scooter. In addition to this we have a photograph of the scooter signed by Roman Abramovich in July 2005, an extensively signed Scootering Magazine article where the scooter appeared in a full feature in the December 2006 edition. Players who signed that include Claude Makelele, Petr Cech, Frank Lampard, Joe Cole and Geremi amongst others. The scooter has been photographed separately with Didier Drogba (signed print) and Phil Daniels of Quadrophenia (also a Chelsea season ticket holder). All of this memorabilia will be supplied with the scooter sale.

The overall cost of the scooters’ creation was extensive for the time but in essence what we have here is a ‘priceless piece of memorabilia’ as written by the official Chelsea magazine itself. Art on wheels.

The scooter itself is in fantastic condition, is fully mechanically operational and has been fastidiously maintained with a service and MOT every year until recently. Based on a Lambretta Li125 ‘Special’ deliberately (the rear Special frame badge is original) she was treated to a full restoration by Medway scooters before he customisation artwork on the panels by mural artist Si Clark. The engine is uprated to 200cc and she has an uprated carburettor to match the performance. The scooter did really have the full works and the extensive bill from Medway Scooters is included in the sale. This included: rebuilt engine, rebuilt forks, 12V electronic conversion, clubman exhaust, continental whitewall tyres, number plate, new cables, new wiring loom, full rubbers and seals, racing shock, and chromed crankcase, and chromed wheels and hubs.

This is the first time that the scooter has been seen in public since moving out of the museum and is now for sale for the first time. Footballing history at its best. An absolute must for sports memorabilia, scooter, Chelsea Football Club or collectors of celebrity art. A fantastic addition to any collection and a solid ‘A-list’ investment. 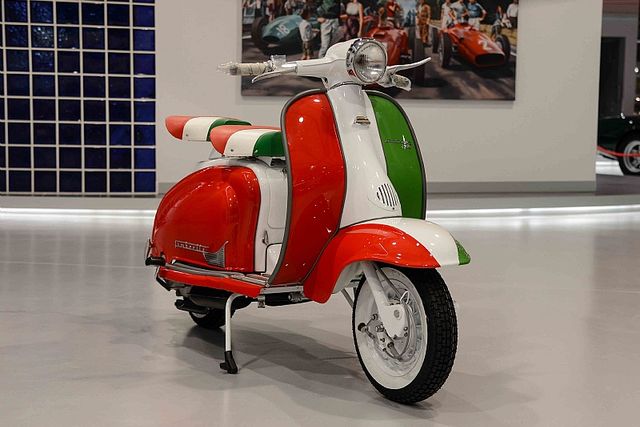