Only ever entrusted to Aston Martin Works Service for maintenance (fifteen stamps)
Warranted 29,000 miles and just one private registered keeper from new
The final evolution of the hand-built, normally aspirated V8 Aston Martin line
1 of 101 made and increasingly collectible
Quite possibly the best example extant?

Although its offerings had evolved significantly, Aston Martin was still employing the same, extremely labour-intensive method of construction during the late 1980s that it had adopted for the DB4 some three decades earlier. Thus, production rarely exceeded an average of 250 cars per annum with a knock-on effect on the company’s finances. A meeting between Aston Martin’s then owner Victor Gauntlett and Ford’s Vice President Walter Hayes while both were staying with Contessa Maggi for the 1987 Mille Miglia Storica resulted in the Blue Oval acquiring seventy-five percent of the Newport Pagnell manufacturer during September that year. Ford had assumed full control by 1993 and thrown considerable resource into developing a more cost-effective, higher volume model, the DB7. However, there were a core of Aston Martin customers who were not only less than enamoured with the latter’s Jaguar-derived running gear but also happy to pay considerably more for a hand-built alternative.

Notable as the last, normally aspirated, aluminium-bodied Newport Pagnell product to be crafted on a sheet-steel platform chassis, the Aston Martin V8 Coupe debuted at the 1996 Geneva Salon. Visually indebted to its supercharged V8 Vantage V550 sibling, the newcomer contrived to look more elegant thanks to a simpler mesh radiator grille, less prominent front air dam, vent-free bonnet and subtler air intakes. Benefiting from Ford funding, the V8 Coupe was a significant advance over its predecessors. Powered by a revised 5.3 litre, DOHC 32-valve engine boasting 350bhp and 369lbft of torque, the four-seater’s smooth four-speed automatic transmission featured Sport and Touring modes (depending upon a driver’s mood). Reputedly capable of 0-60mph in 5.9 seconds and over 155mph, the Aston Martin was intended as more a Grand Tourer than an out-and-out sportscar. Beautifully trimmed with a handsome wood veneer dashboard and sumptuous leather upholstery which extended to the headlining, the V8 Coupe’s interior had a distinctive ‘Old School’ charm about it. Riding on stylish six-spoke, 18-inch OZ Saturn alloy wheels, the Fixed Head proved decidedly exclusive with just 101 being sold from 1996-1999 (in both LHD and RHD configurations). Over two decades on, the V8 Coupe has become increasingly sought after as a true, coach-built Aston Martin with some collectors preferring it to the more overtly aggressive (and expensive to run) Vantage V550 and V600 models.

The best V8 Coupe we have encountered, chassis 79048 has led a charmed existence. Only ever entrusted to Aston Martin Works Service for maintenance, its accompanying service book carries stamps at 494, 4,580, 8,885, 11,432, 13,406, 15,454, 17,050 x2 (2007 and 2008), 19,041, 21,778, 21,800, 26,020, 27,804, 28,335 and 29,236 miles. A warranted low mileage can be one indicator of condition, but this V8 Coupe really needs to be seen in the metal to be fully appreciated. First registered to Aston Martin themselves - but not for use as a demonstrator - and part of a significant private collection in recent years alongside various Bentley, Rolls-Royce, Bristol, Lagonda and Ferrari motorcars (plus other Astons), it has been a particular favourite of the vendor. Though, his sons’ tastes run to more contemporary machinery. Drawing admiring looks wherever it goes, ‘V710 DGF’ has had just one private registered keeper from new. Offered for sale with V5C Registration Document, original book pack and fresh MOT certificate, this exceptional, low mileage V8 Coupe would grace any collection. 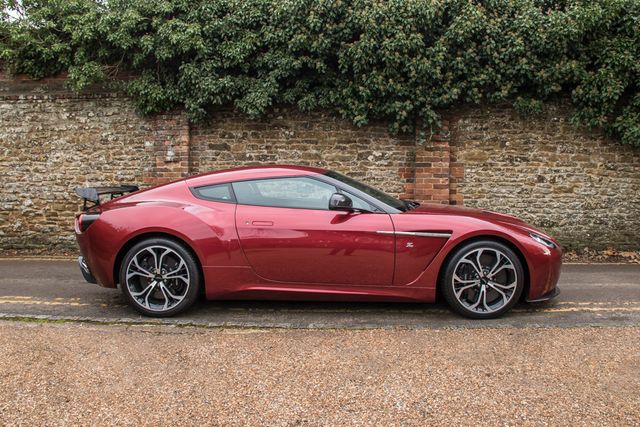