Introduced at the March 1999 Geneva Salon, the Aston Martin DB7 Vantage eschewed its predecessor's 3228cc supercharged straight-six for a 5935cc 48-valve, all-alloy V12 that developed 420bhp and 400lbft. Available with a choice of six-speed manual, five-speed automatic, or (later) Touchtronic semi-auto transmission, the DB7 Vantage could be had in Coupe or Volante (Convertible) guises. The latter had its top speed limited to 165mph but could reportedly accelerate from 0-60mph in 5.1 seconds. To cope with such performance, the 2+2-seater's structure, suspension, and brakes were all upgraded. Asked to rework his masterpiece, stylist Ian Callum added a reshaped back bumper, more pronounced sills, combined driving lamps/indicators, and horizontal bars to the radiator grille. Priced at £104,486 in 2002, Aston Martin's flagship soft-top came with central locking, electric windows/mirrors, traction control, ABS, air-conditioning, front airbags, alarm/immobilizer, and 18-inch alloy wheels as standard. Notable as the marque's first V12 production model, the DB7 Vantage lasted until 2003 by which time some 2,056 Volantes had been made, with just 778 in right-hand drive. The six-speed manual transmission was the rarest transmission, with only 343 examples manufactured, and right-hand-drive manual variants being the rarest of all.

Supplied new via Lancaster Reading Aston Martin, the DB7 Vantage Volante was registered new in the United Kingdom on the 1st of September 2002. Fitted with the 5935cc V12 engine, allied to the rare and desirable six-speed manual transmission, the Aston Martin is finished in Sky Silver with Charcoal interior upholstery, a burr walnut dashboard and wooden trim, along with a complementing Black hood. Having covered just shy of 45,000 miles from new (at time of consignment), the DB7 has had only three former keepers and has resided in the current ownership since 2011, having been purchased by the vendor from Lancaster Reading Aston Martin. Offered with a history file which includes a large selection of servicing and work invoices, several previous MOT certificates, the aforementioned purchase invoice from the vendor, a current V5C document, and the owner's manual containing the service records. The service records document twenty-one service stamps (including the PDI), all of which have been provided by Aston Martin main agents. A scarce opportunity to purchase a right-hand-drive manual DB7 Vantage Volante, the rarest of all DB7s. 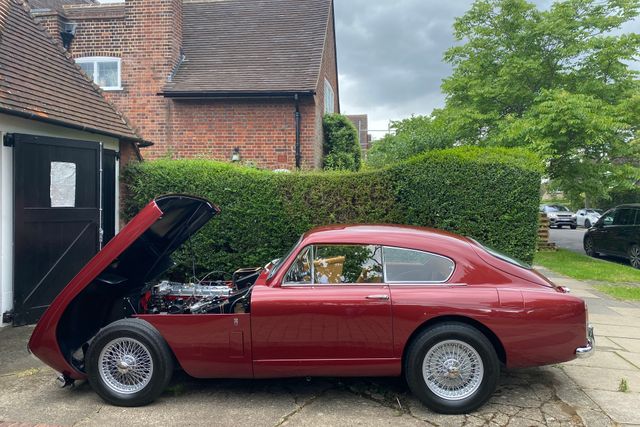