Built to a high standard by Mike Hallowes (Nick Mason's partner in Ten Tenths) during 1987-1989
Based on a Jaguar MkII donor car and incorporating numerous details copied from a genuine Jaguar C-Type owned by Ten Tenths at the time
Tuned 3.8 litre straight-six XK DOHC engine reputed to develop circa 240bhp, four-speed manual plus overdrive transmission
Early Proteus with a 'live' rear axle and alloy centre section
Authentic-looking Jaguar C-Type Evocation with an appealing patina of age / use

In many ways the XK120's success, both on and off the track, took Jaguar by surprise. Among the fastest production cars of its day, the model had obvious competition potential but the endurance racing derivative that debuted at the 1951 Le Mans 24-hours was an altogether more specialised machine. Conceived behind closed doors, the XK120-Competition - a.k.a. the C-Type - was considerably faster, lighter and nimbler than its roadgoing sibling. The work of Bob Knight and Malcolm Sayer respectively, the newcomer's sophisticated multi-tubular chassis frame and aerodynamic all-aluminium bodywork allowed it to conquer contemporary Ferrari, Aston Martin and Mercedes-Benz opposition.

Famous for winning the 1951 and 1953 Le Mans 24-hours, the C-Type may well have triumphed on the 1952 event had Jaguar not chosen to make various unproven modifications. One subsequent upgrade that more than validated its worth was the adoption of four-wheel Dunlop disc brakes. Thus equipped, the C-Type driven by Duncan Hamilton and Tony Rolt at the 1953 Le Mans 24-hours became the first car ever to average over 100mph for the French endurance classic. Total C-Type production amounted to just 53 cars but even after Jaguar had turned its attention to the D-Type privateers continued to campaign the older design with considerable success (often uprating the engine from 3.4- to 3.8-litres in the process).

Unsurprisingly given its beauty, speed and pedigree, the C-Type has been widely copied by the likes of Lynx, Wingfield and Proteus. The latter concern was established by Jim Marland during 1985 and initially based in Bolton, Lancashire. Of the circa 240 C-Type Evocation chassis / body units that Mr Marland produced up until 2000, only 40 or so featured all-alloy bodywork; the remainder utilising an alloy centre tub and fibreglass front / rear sections. The majority of cars were supplied in kit form for the purchaser (or a third party) to complete (though, a select few were assembled by Proteus's founder himself). Highly convincing and beautifully detailed, Proteus C-Type Evocations are both rare and sought after.

According to a letter on file from a previous owner, this particular example was built using a Jaguar MkII 3.8 saloon as a donor by Michael Hallowes (Nick Mason’s partner at Ten Tenths) during 1987-1989. Able to use an original Jaguar C-Type for reference, Mr Hallowes reportedly imbued the Proteus with a wealth of authentic details. An early ‘live’ rear axle model registered with the DVLA as a 1960 Jaguar 3.8 Sports (and classified as a ‘Historic Vehicle’), ‘YYF 830’ is powered by a VSE Engineering prepared 3.8 litre XK DOHC engine allied to four-speed manual plus overdrive transmission. Fed by twin SU carburettors and sporting ‘C-Type’ logoed cam covers, the straight-six is understood to be fitted with a ‘Big Valve’ cylinder head and high compression pistons which help it produce an estimated 240bhp. Sold by Mr Hallowes to his stockbroker Mr Eastway, the two-seater changed hands again in 1995. Treated to an uprated radiator and new bushes and seals all round, the Proteus also gained uprated disc brakes.

Enjoyed for several trips to Le Mans and on a couple of Classic Motorsport Rallies, ‘YYF 830’ has been little used in recent years as part of two private collections. Thought to have covered some 20,000 miles since its completion, the C-Type Evocation is described by the vendor as being in ‘good’ condition with regards to its engine, gearbox, interior trim and electrical equipment. While, the gently patinated bodywork and paintwork are rated as ‘average’. Starting readily upon inspection and sounding decidedly purposeful via its side-exit exhaust, this desirable Proteus has much to recommend it. Offered for sale with V5C Registration Document, numerous old MOT certificates and sundry paperwork. 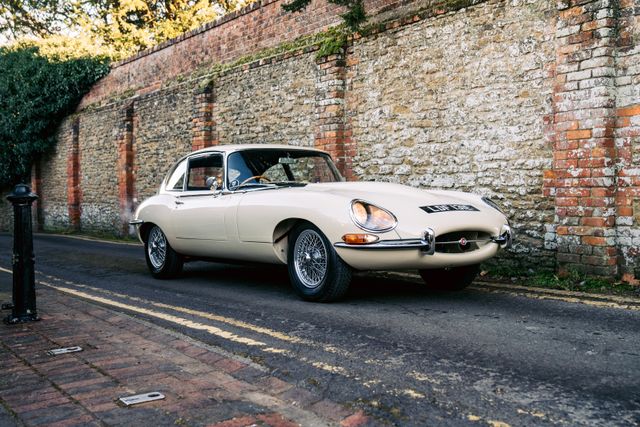