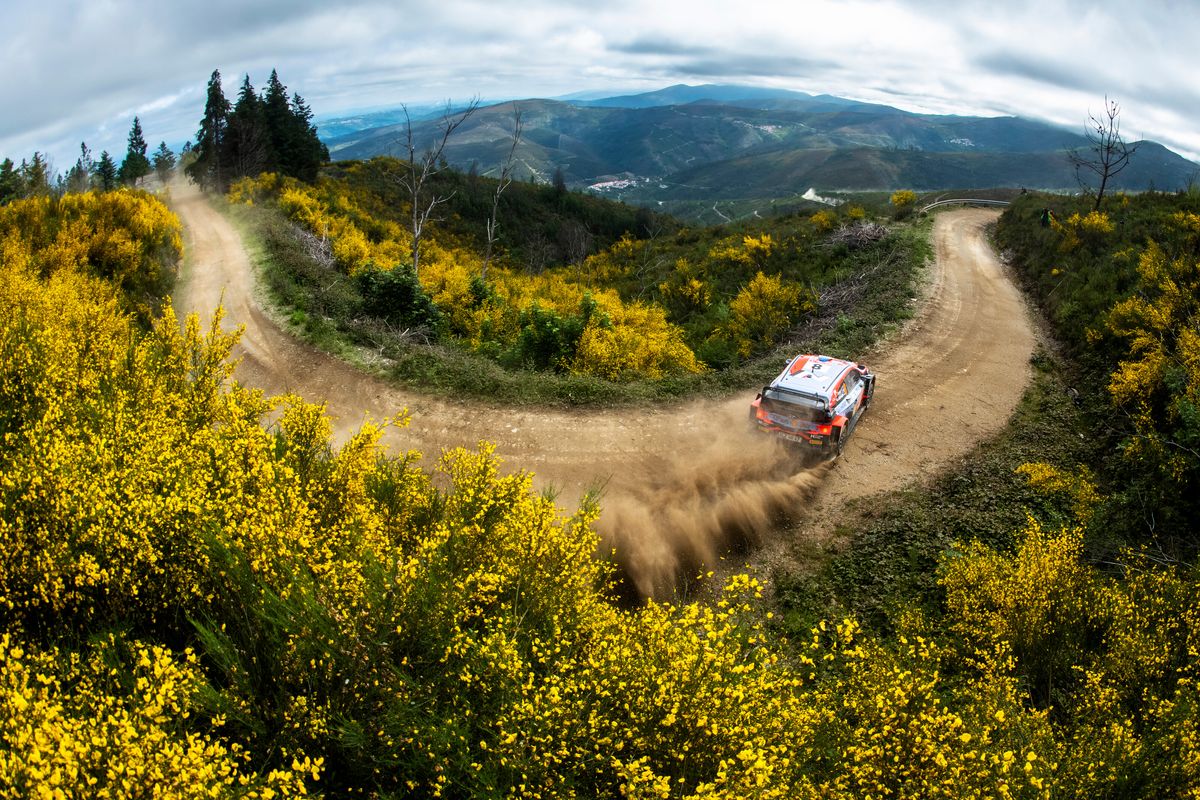 Friday round up: Estonian edges ahead of Evans and Sordo as title leader Ogier stays in touch.

Tänak topped the fourth round of the 2021 FIA World Rally Championship by 6.0sec in his i20 World Rally Car from Elfyn Evans, after longtime leader and team-mate Dani Sordo stalled his car's engine in the penultimate Mortagua speed test.

A worse fate befell Thierry Neuville, lying second in another i20. The Belgian was too hot into a right corner, slid into a bank and the car tipped onto its side. The crew righted it and limped to the finish, but the impact shattered the rear right suspension and they retired.

Tänak won the opening speed test as Sordo stalled for the first time, but the Estonian was battling the car all morning and dropped back. An afternoon puncture relegated him behind Neuville before he profited from his team-mate's late dramas.

"It's been a demanding day, so much has been happening and so many issues," Tänak said. "I'm looking forward to a bit of rest before we start again tomorrow. It wasn't working well this morning, it was a bit like fighting, not natural."

Tyre management was crucial. Pirelli's soft compound rubber was the preferred option for this morning's sandy surfaces before hard tyres came into play this afternoon when the repeated stages were rougher.

Evans lacked confidence as the soft tyres left his Toyota Yaris feeling unstable. He steered clear of trouble and jumped from fourth to second after Sordo and Neuville's problems, ending 3.0sec clear of Sordo.

Takamoto Katsuta enjoyed his best day in the WRC to hold fourth in another Yaris, ahead of Sébastien Ogier.

The championship leader was more than 40sec adrift in seventh after struggling with the least grip on the sandy roads from first in the start order. Fastest time in Mortagua and the problems of those ahead promoted Ogier to fifth and ready to pounce from a better start position tomorrow.

A lacklustre Kalle Rovanperä made it four Yaris cars in the top six. The young Finn was initially troubled by understeer but tweaked the car's set-up and won a stage this afternoon, before tyre troubles meant he had to resort to used soft rubber.

Almost half the rally's competitive distance is packed into Saturday. Two identical loops of three speed tests in the Cabreira Mountains, north-east of Matosinhos, are separated by service and a coastal street stage in Porto closes the leg after more than 165km of action.