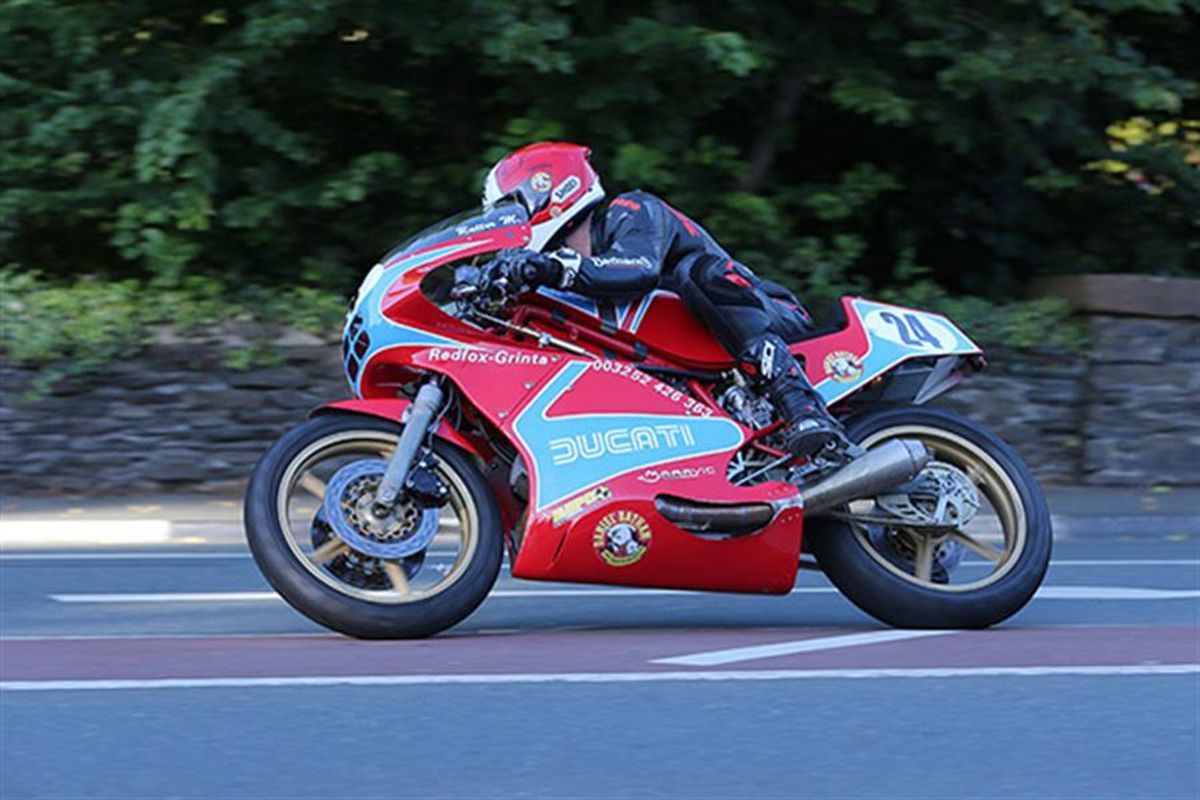 The Midlands ace rode for the team in 2015, finishing in the top ten of the Superbike Classic TT Race when he also lapped at more than 120mph and will again ride the 1200cc Ducati in 2017. The machine will be identical in appearance to the machine his father Tony took to third place in both the 1984 Formula One TT Race and TT Formula One World Championship.

Rutter, who took his fifth TT win earlier this year with victory in the Bennetts Lightweight Race, will run the bike in the same livery that his Dad competed in, complete with matching leathers whilst the Belgium-based Red Fox Grinta team have expanded their efforts this year to also include the Dunlop Lightweight Classic TT Race.

He took second place in last year’s corresponding race lapping at over 125mph on the Winfield Harris Yamaha and with the Red Fox Grinta team having greater experience of the rigours of the Mountain Course, the 45-year old is sure to be challenging for a top six position, at least, on the booming V-twin Ducati.

The Bridgnorth rider will again be Ducati-mounted for the Dunlop Lightweight Classic TT Race, this time on a 750cc machine with Red Fox Grinta coming to the island with a superb reputation as Ducati specialists. Owned by Jan de Vos, they’ve been competing and winning in Supersport, Superbike, Battle of the Twins, Supertwins and Endurance racing for almost 20 years with all of their bikes built and developed in their workshop.

With years of experience, they have recently branched out into Classic racing and will now make their eagerly anticipated return to the Mountain Course and the Classic TT where rider, machine and team are sure to be eagerly watched.

Tony Rutter had a strong association with Ducati in the 1980s, taking four successive World Formula Two Championships from 1981-1984 but he also had success on the larger 750cc version, particularly in 1984 when he was only beaten by the works Hondas of Joey Dunlop and Roger Marshall in the six lap TT Formula One Race. He lapped at an impressive 111.35mph that year and went on to take fourth at the Ulster GP and Vila Real, Portugal, fifth at Zolder, Belgium and seventh at the Dutch TT to claim third overall in the World Championship.

“I love the Classic TT and I am delighted to be teaming up with the Red Fox Grinta guys again to race their immaculate Ducati’s. They are bikes that stand out from the crowd and the guys do an amazing job both in terms of their presentation and attention to detail. They are passionate about everything they do, and hopefully together we can put on a good show for the fans and come away with two strong results.”

Classic TT Grandstand tickets are available now starting from as little at £5 with race day tickets priced at £20. VIP experiences, tickets for the Classic TT Party on Saturday 26th August the RST Classic TT Legends Dinner on Sunday 27th and the Classic TT Prize giving and Closing Party on Monday 28th August are all available to buy now at iomtt.com or our sales hotline on (00 44) (0) 1624 640011.