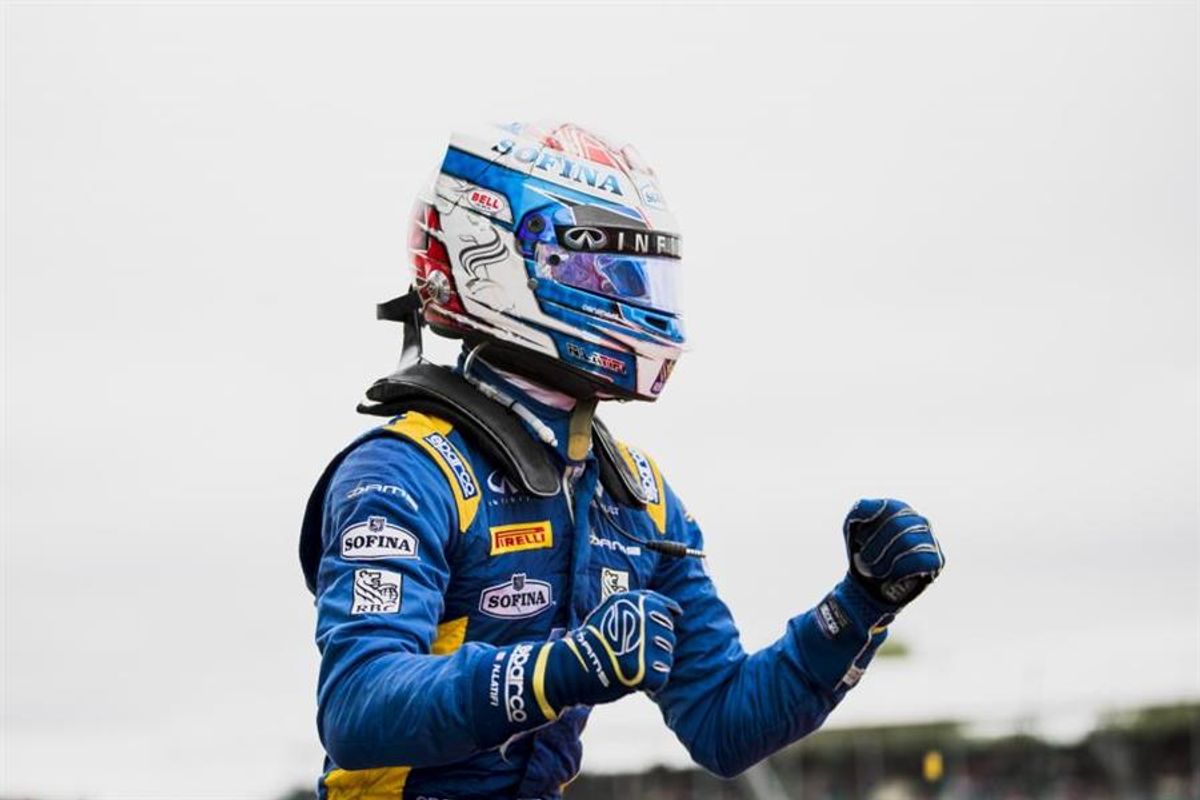 Nicholas Latifi put in a racing masterclass to easily claim his maiden FIA Formula 2 win with a strong drive in cold conditions in this morning’s Sprint Race in Silverstone, building a big lead before controlling the restart from a late safety car to win ahead of RUSSIAN TIME’s Luca Ghiotto and Artem Markelov.

The Canadian made light work of the chilly conditions to make a great start from pole when the lights went out, easily holding Ghiotto and Oliver Rowland behind him as he led the way into turn 1, with the latter soon under attack by Jordan King: the pair touched at turn 3 with King sent wide but Rowland continuing before easing Markelov partially onto the grass to avoid an attack, earning a 5 second penalty for his efforts.

Latifi set a string of fast laps to break the chain back to Ghiotto, but behind the top 4 Sergio Canamasas and Charles Leclerc were having a huge battle for lap after lap before the Monegasque driver finally and firmly pushed past the Spaniard on lap 12 and headed off to mix it with the others, with Rowland pushing Ghiotto all around the track and Markelov biding his time between the pair as Latifi sailed into the distance.

The Canadian looked serene in the lead, but a late wrinkle in his plans arose on lap 18 when Ralph Boschung tried to overtake Alexander Albon but put a wheel on the grass before heavily impacting the wall at Stowe, prompting a safety car period with 3 laps remaining. Fast work by the marshals saw the last lap run live: Latifi easily controlled the restart to win from Ghiotto, while behind them Rowland tried to hold up his rivals but instead gave a line through for Markelov to mug him for 3rd on track, with Rowland 4th on track but 10th in the classification due to his time penalty.

The Leclerc/Canamasas war restarted into the final complex, with the Spaniard stealing a march on the Monegasque for P4, with Norman Nato holding on for 6th when teammate Sean Gelael, who had followed him all race long, spun out of the race at Vale to promote Nyck De Vries (an impressive race after starting last on the grid) and Nobuharu Matsushita into the final points positions.

The feature race win saw Leclerc extend his lead in the championship to 67 points over the promoted Markelov, 188 points to 121, with Rowland dropping to third on 117 points ahead Latifi on 91 and Ghiotto on 86, while in the teams’ title fight PREMA Racing has nudged ahead of DAMS by 3 points, 211 points to 208, with RUSSIAN TIME one point further back on 207 points as the field looks ahead to Round 7 of the championship in Budapest, Hungary.