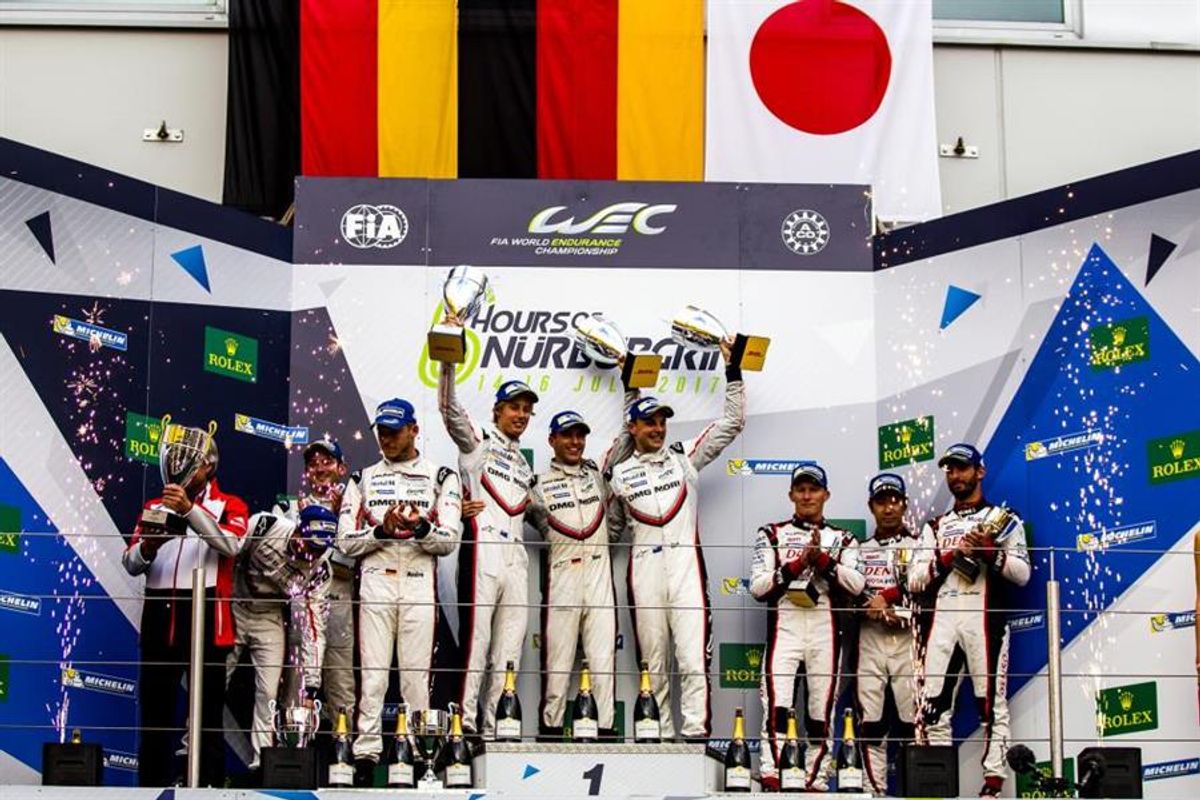 Timo Bernhard, Brendon Hartley and Earl Bamber took their second win of the 2017 FIA World Endurance Championship season after a thrilling battle with the sister no1 Porsche 919 Hybrid at the Nürburgring. The two Porsche 919s finished 64 seconds ahead of the no7 Toyota TS050.

The race didn’t get off to the best start for Toyota as the no8 TS050 of Sebastien Buemi slowed on the formation lap and had to return to the garage for a new fuel pump to be fitted. The Swiss driver rejoined the race but he was five laps down.

The no7 Toyota of Kamui Kobayashi capitilised on his pole position to lead at the start but had the two Porsches, led by the no2 919 of Timo Bernhard. At the pitstops the no1 Porsche gets the upperhand as Neel Jani beats Brendon Hartley out of the pits. However it is short lived as Hartley gets ahead of his teammate and then in the second hour takes the lead from Lopez, who was now at the wheel of the Toyota.

The race then settled down with the Porsche 919s holding the upperhand and the two cars swapping places a few times before Earl Bamber overtakes Nick Tandy in the no1 car. Tandy fights back but contact with the no67 Ford blunts his challenge and puts the Ford into the gravel.

This was Porsche’s third win at the Nurburgring since the WEC first raced in Germany in 2015, with Brendon Hartley and Timo Bernhard standing on the top step of the podium for the third time.

Brendon Hartley, Timo Bernhard and Earl Bamber now have a 30 point advantage in the Driver’s World Championship over Anthony Davidson, Sebastien Buemi and Kazuki Nakajima. In the Manufacturers’ World Championship Porsche are on 154 points to Toyota’s 114.5 after four races.

The LMGTE Pro class saw all four manufacturers challenging for the win. The no95 Aston Martin Racing Vantage of Marco Sorensen was the early race leader but he was under some pressure from both Porsche 911s and the no66 Ford GT all looking for an opportunity to take the lead.

The no71 Ferrari of Davide Rigon was running in the leading pack but a gearbox issue lost the Italian some time and he dropped out of contention.

The no91 Porsche of Fred Makowiecki took the lead in the first hour and built up a small advantage but by the second hour the advantage had swung to the no92 911 as Kevin Estre overtook Richard Lietz. Lietz then came under pressure from the charging no51 AF Corse Ferrari of Alessandro Pier Guidi, who swept past the Austrian and then closed the gap to the leading Porsche.

After the pitstops, James Calado’s Ferrari closes right up behind the leading Porsche of Michael Christensen and an epic fight for the lead ensued but eventually the pressure told and Calado took the lead. The British driver then built up an comfortable 25 second lead ahead of the two Porsches as the challenge to the no91 911 from the no95 Aston Martin faded away.

At the chequered flag the no51 AF Corse Ferrari 488 was 50 seconds ahead of the rest of the field with Porsche taking the other two podium positions.

Ferrari and Ford are now tied on 135 points in the GT Manufacturers Championship but Ferrari are placed first thanks to their two wins in Belgium and Germany against Ford’s single victory in the UK. Ford drivers Andy Priaulx and Harry Tincknell, who finished fifth in the race, maintain a 11 point lead over their nearest rivals Fred Makowiecki and Richard Lietz in the drivers title race.

The Jackie Chan DC Racing team celebrated their third in four races with the Oliver Jarvis, Thomas Laurent and Ho-Pin Tung crewed Oreca-Gibson. The 24 Hours of LE Mans class winners and overall podium finishers led for the majority of the race after wresting the lead from the no31 Vaillante Rebellion and finished a lap ahead of the Swiss team and the no36 Signatech Alpine A470.

The Chinese team now hold a 46 point advantage in the both the driver and team LMP2 points tables.

Victory for Porsche in LMGTE Am

LMGTE Am saw a popular home victory for Dempsey-Proton Porsche with German drivers Christian Ried and Marvin Dienst joining Italian Matteo Cairolio on the top step of the podium. They held off the Spirit of Race Ferrari and Aston Martin Racing challenge to ensure that both Dienst and Cairoli took their first WEC wins and Ried’s first win since 2012.

The 25 points for the Dempsey-Proton Racing crew puts them on 88 points, level with the crew of the no61 Clearwater Racing Ferrari crew of Matt Griffin, Keita Sawa and Weng Sun Mok. The no98 Aston Martin Racing crew of Pedro Lamy, Paul Dalla Lana and Mathias Lauda are third on 86 points, just two points behind their rivals.

Round 5 of the FIA World Endurance Championship will be the 6 Hours of Mexico on Sunday 4 September.