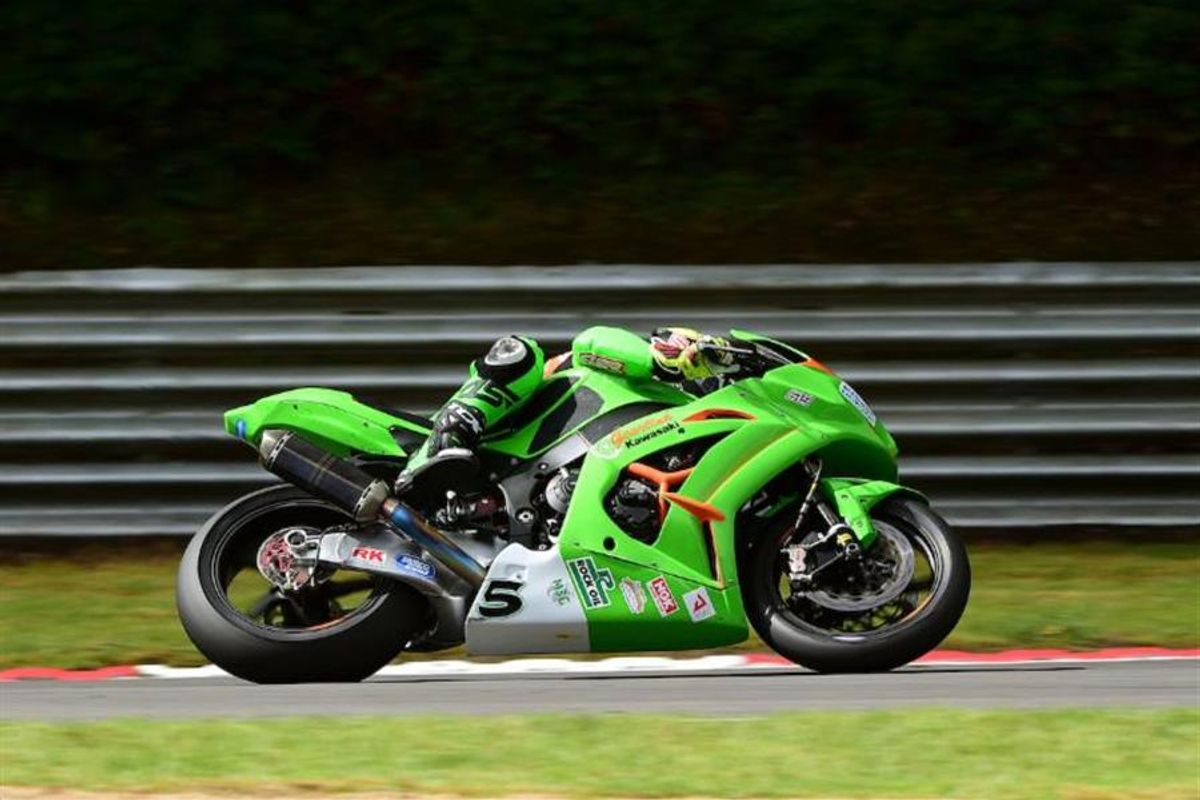 It was another strong weekend for the Gearlink Kawasaki team at round six of the Dickies British Supersport Championship at the Brands Hatch GP circuit. Andrew Irwin gained a strong fourth and third place and his Australian team mate Ben Currie was sixth and fifth.

Andrew Irwin worked hard with the Gearlink team throughout the weekend to find a good set-up at the technical Brands GP circuit. He was caught out by the rain during the qualifying session and started race one from 7th place. After a downpour earlier in the afternoon tyre choice became the issue for the drying tarmac. He worked hard throughout the race and was able to secure 4th place at the end of the 10-laps.

For race two he was placed in 8th on the grid and once again he got a fantastic start and was fourth after lap one. He was soon locked in a battle with his Irish rivals Keith Farmer and Jack Kennedy, in the closing laps he was able to make a move on Farmer to lead the race. Keith made his move back which ran them both wide on the final lap which allowed Jack Kennedy to come through and take the win, Andrew ended the race in 3rd place.

Ben Currie continued to be extremely consistent during the races, despite a crash on Friday he was eager to show his form. He qualified for race one in ninth place so he had a lot of work to do in the opening race of the weekend on Saturday. He pushed hard from the start and he was able to work his way through to sixth at the end of the 10 lap race.

He started from fourth for race two and he was not able to push forward for that overdue podium position. He was pushing hard in the opening laps and was locked in a battle with David Allingham, his lap times were strong but he had to settle for fifth at the end of the 18-lap race.

Andrew Irwin - "It was certainly a challenging weekend, we chose to run the intermediate tyre for the first race on Saturday and I've never used one before. It was a big learning curve but we took a lot away from the race and some good positives.

I had to start from 8th today so I knew a good start was important. I tried my best and the result could have gone one of three ways! The race was good and my Gearlink Kawasaki was awesome, I'm disappointed not to have secured the win but at the same time it's another podium and some solid points.

The Championship is still all to play for and I can't wait to get to Thruxton as it's a track I really enjoy riding. Thank you to the Gearlink Kawasaki team and all my personal sponsors!"

Ben Currie - "Firstly, I would like to say a huge thank you to the Gearlink Kawasaki team for always sticking by me. Even through times where no matter what I do I can't seem to find the top steps.

We are at the half way point in the season now and we have learnt so much. I'm confident we can turn it around and start to win races.

This weekend we had the pace but couldn't convert it into race results. I can't wait for Thruxton and to get back out there again!

I'd like to say a huge thank you to my sponsors and everyone in my personal team that makes this happen for me."

It was all looking set to be a really strong weekend for James Westmoreland as the team made some great progress during the practice and qualifying sessions. James was 12th in FP3 in the dry conditions and then was able to qualify for race one in 9th after a very heavy downpour. The race results sadly did not reflect the effort and progress that was made. He was 18th in race one and was forced to pull in from race two with a technical problem.

James Westmoreland - "It was a really disappointing race day after a very solid weekend. I feel like we have made a big step this weekend but I suffered with a few issues in the races which hindered my progress.

It's difficult to know what to say because we lost a lot of pace today and it's hard to pinpoint what exactly happened because I've felt so confident all weekend.

I'll keep positive and aim to be strong at Thruxton. My last Superbike race at Thruxton I was on the podium so I'm going there very motivated."

Team Manager Michael de Bidaph - "Andrew and Ben have been really consistent throughout the weekend in the Supersport class. We made the wrong call for both riders on tyres for race one but both of them made the best of a bad situation and still secured some good results.

Andrew is riding so well at the moment and he is so close to that win. He did nothing wrong today and rode exceptionally well, I hope he gets the win that he deserves soon.

We are working strongly with Ben to help develop and progress him in the series. He certainly has the pace but something is missing at the moment and we are working hard now to make sure we place all the pieces together. He is certainly capable of good things.

We were really excited about the Superbike races this weekend as we made some really big progress and it showed in all practice sessions. The wet conditions allowed James to secure a great grid position of ninth but sadly the races let us down today. We will continue to find out what is going on and keep progressing."