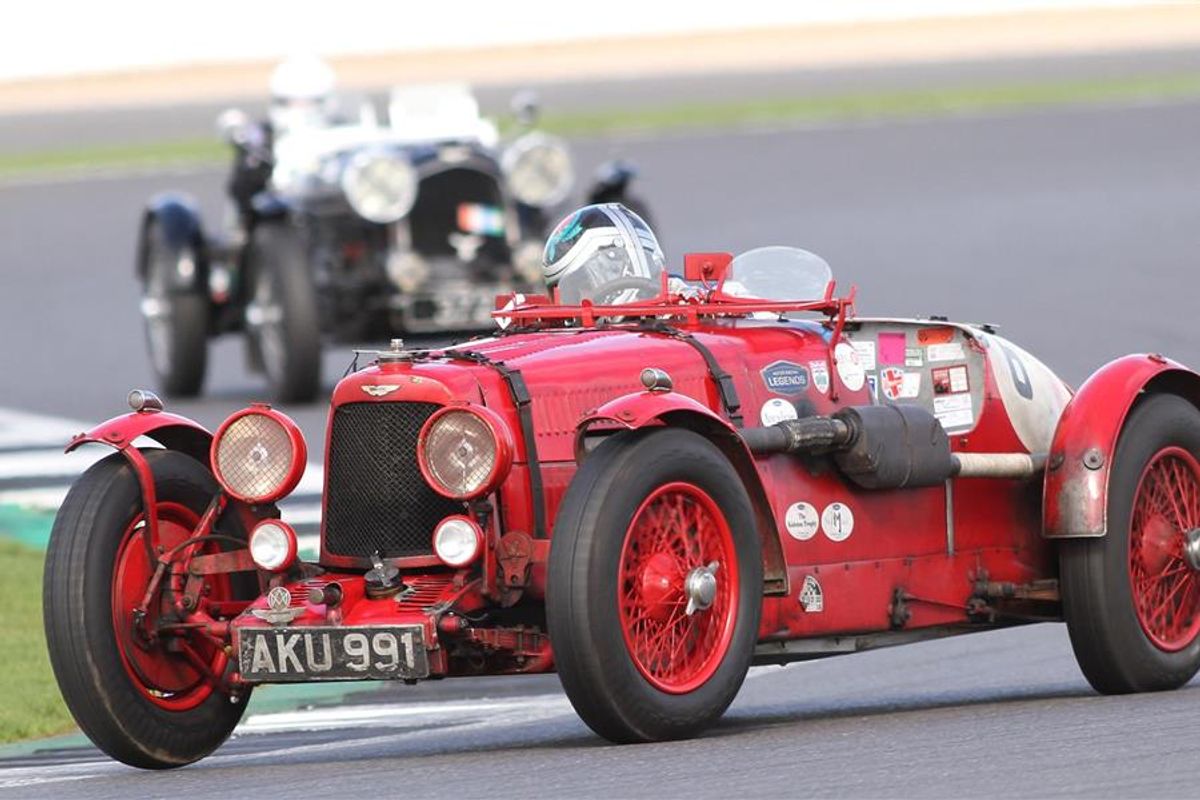 Silverstone on Saturday September 30th saw the 2017 AMOC Racing season sign off in style with bumper grids and great racing. A dramatic combined Intermarque and GT Challenge race saw Richard Cook and Harvey Stanley battle hard for their win, while Rob Hollyman dominated in the Intermarque but third was enough to give Bob Searles the Individual Championship title.

The AMOC ‘50s Sports Cars including the Vredestein JEC XK Challenge opened the day’s racing and on lap one the Cooper Bristol of John Ure slipped by poleman Dan Crowton’s Lotus at Luffield to take the lead and later the win, Crowton losing out again a lap later as the Cooper Monaco of Tony Ditheridge, up from fifth on the grid, moved into second with the MGA of Max Cawthorn moving into third.

In the final laps the lead three closed up, and Ure was right with Ditheridge as they crossed the line but this was the order they finished. Rob Newall was first of the XK Challenge runners home and seventh overall in his XK120, having run sixth overall for much of the race on the tail of the Bond and Ellis dice. Andrew Wenman and Paul Kennelly rounded out the Jaguar podium and also the top ten overall, Wenman having passed Kennelly on lap 15.

The St John Horsfall Memorial Trophy and Pre-War Team Challenge was run as a 16- lap handicap race, the impressive field flagged away at the start at timed intervals and with credit laps for some runners. Guy Northam’s Bentley led the early running courtesy of three credit laps with the Aston Martin International of Keith Piper second, but the quicker cars were closing in.

Like all the best handicaps everything came together in the final laps, Richard Bradley going past Northam as they crossed the line to start the last lap and taking the win, and the St John Horsfall Trophy as first Aston Martin home. The Aston Martin Speed of David Ozanne came through for second, with James Morley’s Bentley further demoting Northam on the final lap to finish third.

A large grid of 38 cars took on the combined AMOC Intermarque and GT Challenge race, and the red flags were quickly out to stop the race after an incident exiting the first corner. The grid reformed and the race distance was dropped to 40 minutes. The field got away safely at the second time of asking, with the Ferrari of Tony Jones leading the pack.

A series of consecutive fastest race laps from Jones saw him easing away from the similar Ferrari 430 Challenge of Richard Cook, with the F430 of Neil Garnham and Robert Young making it a Ferrari one-two-three at the front. The lead group were mighty in traffic, slicing through the slower cars, with Cook the first to pit, handing his car over to Harvey Stanley at the end of lap 14.

In the final laps after the pit stop reshuffle Jones was still leading but Stanley was right on his tail. Stanley found a way past on lap 33 to take the win, setting a new fastest race lap on his way with Jones finishing less than a second back at the end. Kemp had run in third but a technical issue in the final lap promoted the BMW of Arran and James Moulton-Smith into third.

The AMOC Intermarque runners were in the thick of the first corner incident that brought out the red flags and the race restarted without the Porsche 968 CS of Peter Mangion and the 911 RS of Josh Sadler and Mark Henderson. Once racing restarted it was Robert Hollyman who set the Intermarque pace in his Porsche 964, pulling away for the rest of the field in the opening laps to take a commanding win.

Behind, attention was on the battle for the drivers’ Championship title, the Porsche team having already secured the marque’s crown, James Hilliard second in his 968 with Ryan Hooker third in the early laps. Once the pit stops were complete Hollyman well ahead, with championship chasing Norton in second having taken over his Porsche 968 from James Guess. Third was Tony Jardine now in the Porsche 944 Turbo started by Searle and this was the order they crossed the line. The third place for Jardine was enough to give Searles the title.

“We have had a good season,” said Searles, who pipped Norton by two points after dropped scores were taken into account. "I only got to see the car yesterday after our incident at Brands Hatch and it packed up and took us ten hours to fix, then I was in the thick of the incident on the first lap today and spun round some of the other cars. We have had highs and lows this season and it is great to end it on a high!”

The final race of the day was a three-hour relay for the Equipe GTS series, which featured 27 teams of up to four cars. Overall winners across the line were the Marcos 1800 GTS team of Richard Evans, Andrew Smith and Chris Keen, who took control of the race in the second hour and finished a lap clear of ‘Tall, Bald and Short’ the MGB team of Tom Smith, Simon Cripps and Tom Beresford. Once the handicap laps were applied the MGB trio Team Torque Motorsport made up of Peter Haynes, Nick Trott and Paul Latimers were declared overall winners.

The Equipe team also said a farewell to AMOC stalwart Pete Foster, who was retiring after over 40 years of successful motorsport.