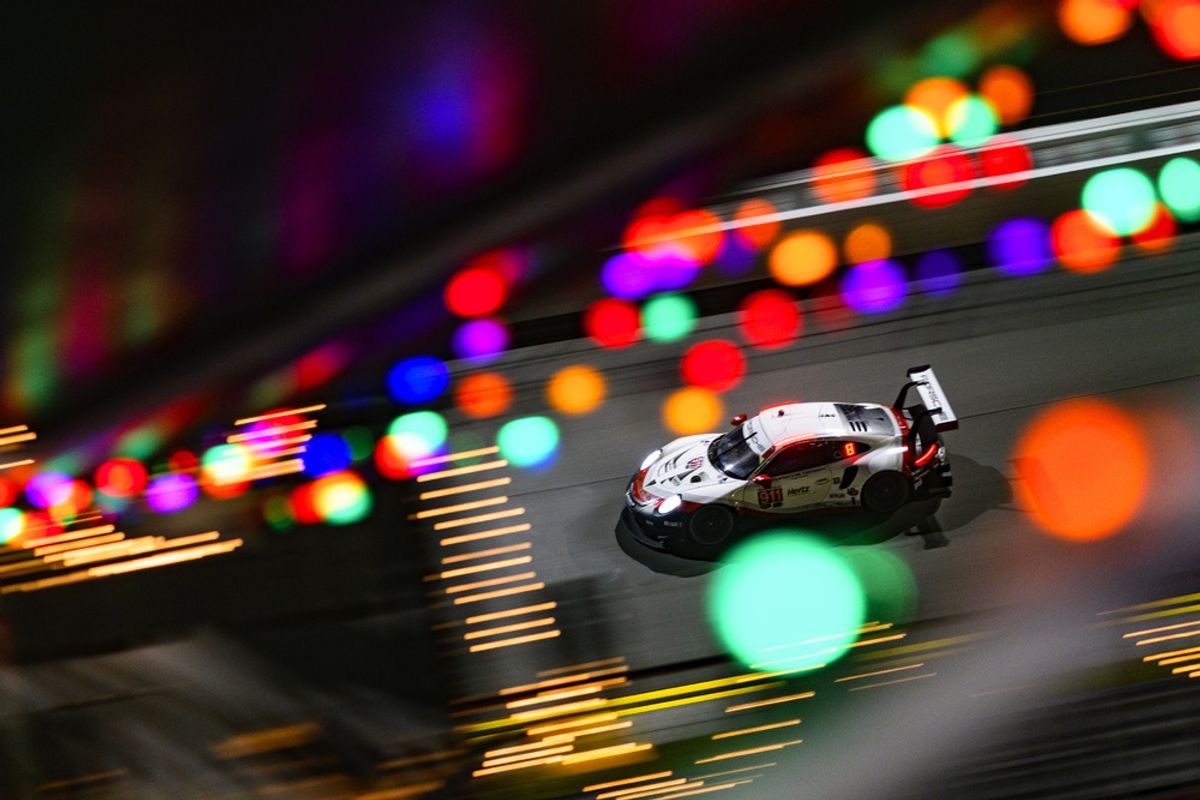 Fifty years after Porsche’s first overall victory at the 24 Hours of Daytona, the Porsche GT Team fielded two 911 RSR this weekend at the long distance classic in Florida. The 510 hp racer with the starting number 912, driven by two-time overall Le Mans winner Earl Bamber (New Zealand), Laurens Vanthoor (Belgium) and Gianmaria Bruni (Italy), finished sixth in the strongly supported GTLM class. The second 911 RSR with the starting number 911, in which Patrick Pilet (France), Nick Tandy (Great Britain) and Frédéric Makowiecki (France) led the field at one point in the first third of the race, took the flag in eighth. Two pit stops for repairs after leaving the track in the Bus Stop chicane hampered a top result.

The two 911 RSR took up the 56th edition of the season’s first major sports car race on the 5.729-kilometre Daytona International Speedway from the second grid row. Facing strong opposition from BMW, Chevrolet, Ferrari and Ford, they were able to build on their good qualifying performance and maintain contact to the frontrunners on the tradition-steeped, challenging racetrack featuring two banked turns and a tight infield. After a brief downpour five hours into the race, the strategists at the pit wall made their move: unlike most of their rivals, the Porsche pilots did not switch to wet tyres but continued on slicks. Although their lap times were initially slower, they were spared from stopping twice for tyre changes. Thanks to this perfect strategy and his remarkable performance on a wet then slowly drying circuit, Patrick Pilet moved into the lead of the GT field after six hours. He only lost the front spot when he eventually came in for a scheduled driver change.

The pursuit that his teammate Nick Tandy then launched to retake the lead did not last long. After eight hours and 293 laps, the 2015 outright Le Mans winner lost control of his car in the Bus Stop chicane, slid at high speed over the still wet green strip next to the track, and impacted heavily with a stack of tyres. His 510 hp racer was so badly damaged that it had to be pushed straight into the garage for repairs after returning to the pits. The crew of mechanics immediately set to work and managed to get Tandy back on the track after 20 minutes. However, the 13 laps that he lost to the class leaders because of this incident proved impossible to regain. The dream of the 78th class win for Porsche was buried. His second impact at the same spot during the night cost more valuable time, but proved inconsequential due to the already significant gap.

The race for the #912 Porsche 911 RSR, shared by Earl Bamber, Laurens Vanthoor and Gianmaria Bruni, ran without issues. The trio made no major mistakes, however they were unable to match the pace of the frontrunners over the distance. In addition, the caution phases at this year’s Daytona race were few and far between, making it impossible to close the gap to the leaders behind the safety car. Especially in the USA, the race director uses this method after incidents on the track to herd the field together and thus keep suspense high. This year, however, there were only four caution phases compared to 21 in 2017.

Round two of the IMSA SportsCar Championship is the 12-hour race in Sebring on 17 March in the US state of Florida.

Comments on the race
Dr Frank-Steffen Walliser, Vice President Motorsport and GT Cars: “We gained a lot of positive experiences in preparing for the race and at the start, also in terms of the performance of our 911 RSR. Unfortunately we weren’t able to implement this over the entire race distance. The result is disappointing. We had bad luck with the two impacts which cost us a lot of time. As a result, the faster car fell far behind. The whole team worked excellently and fought to the finish. The pit stops for repairs ran perfectly, yet we couldn’t do any more. That was not our race.”
Patrick Pilet (911 RSR #911): “Obviously it’s a disappointing result. But we can’t put the blame on anyone. The drivers and team did everything, accidents can always happen, especially under such difficult conditions. This year’s Daytona race was unusual with so few caution phases. What I like about our team is that it never gives up. That’s why we’re staying positive after this difficult start to the season and we’re looking forward to the race in Sebring.”
Nick Tandy (911 RSR #911): “After such an unfortunate race we have to look at things in a positive light. For instance, one positive aspect is that the team pulled together as one unit this week. Everyone knew what they had to do. Plus we didn’t have any problems during free practice and were going well early on in the race. We now need to build on this. Daytona is an important race, there’s no question about that, but the season has only just begun.”
Frédéric Makowiecki (911 RSR #911): “Thanks to the team spirit and the great performance from the entire squad, who didn’t make the slightest mistake, we’ll be much stronger at Sebring.”
Earl Bamber (911 RSR #912): “That was a really tough race for us against strong opposition. We have a lot of work ahead of us, but we’re not giving up. We’ll take the positive things and now look forward to Sebring.”
Laurens Vanthoor (911 RSR # 912): “Prior to the race we were all feeling very confident. We conducted very intensive tests here and managed to find a good setup for our 911 RSR on this racetrack. That makes this result all the more disappointing. Daytona was a strange race this year with very few safety car phases. We actually didn’t make any mistakes, however we were simply not fast enough in some passages.”
Gianmaria Bruni (911 RSR # 912): “Daytona was my first 24-hour race with Porsche and that alone made it a great experience which I really enjoyed. Unfortunately we had a few problems during the race. We’ll now analyze these back at Weissach and make the right decisions to come back stronger at Sebring. Our overall package is good, we have to make the most of this in the race.”

All results and points standings for the IMSA WeatherTech SportsCar Championship and the North American Endurance Cup can be found on results.imsa.com.