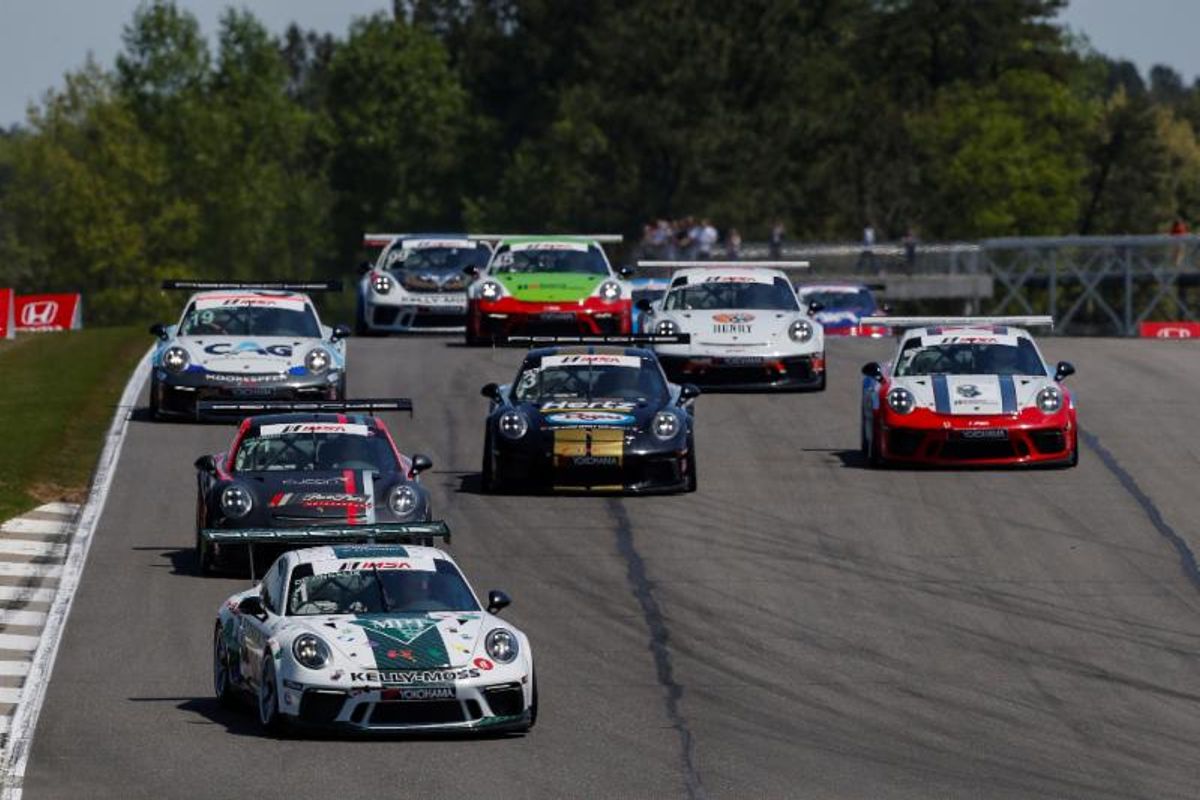 Driving the No. 1 Kelly-Moss Road and Race Porsche 911 GT3 Cup entry, De Angelis got away clean at the start of the 45-minute race and led throughout. There was one tense moment with less than 10 minutes remaining when second-place David Kolkmann closed up behind De Angelis as the two were navigating lapped traffic, but De Angelis calmly handled the pressure and went on to win by 2.162 seconds over Kolkmann.

“Leading the whole race, obviously, seems like it’s easy from the outside, but it’s one of the hardest things you can do, to be honest,” De Angelis said. “I don’t think we put a wheel wrong the whole time. The car was phenomenal. There’s no better place to win than in Alabama, with Children’s Hospital of Alabama and Medical Properties Trust. I’m really, really happy about today.”

It was the first Platinum Cup victory for De Angelis after winning the 2017 Ultra 94 Porsche GT3 Cup Challenge Canada by Yokohama championship Gold Cup class for cars built between 2014 and 2016. The victory also enabled him to close the gap in the Platinum Cup championship standings to nine points behind leader Trenton Estep, 97-88, with three of 16 races now in the books. De Angelis is third in the standings, trailing second place Will Hardeman by three points.

For Kolkmann, a 21-year-old German driver competing in his first season of GT3 Cup Challenge USA competition, the runner-up result was his best to date in the No. 71 Park Place Motorsports Porsche. He will line up alongside De Angelis on the front row for the second 45-minute race of the weekend on Sunday morning.

After a spirited battle for much of the race with Maxwell Root in the No. 7 Wright Motorsports Porsche, Estep managed to preserve his championship lead with a third-place showing in the No. 7 JDX Racing Porsche. He finished one spot ahead of Hardeman, who came home fourth in the No. 19 Moorespeed entry. Root wound up fifth at the checkered flag.

For the second consecutive race, Charlie Luck scored the Platinum Cup Masters victory in the No. 45 Wright Motorsports Porsche. The driver from Richmond, Virginia finished seventh overall and shared the Masters Podium with Alan Metni in the No. 99 AM Motorsports/Kelly-Moss Porsche and David Baker in the No. 56 Topp Racing Porsche.

“Oh gosh, it’s still just as sweet,” Luck said. “It just takes so many things to go right to win. You just can’t have many mistakes. It’s just push, push, push, push. I got a little bit slack in the middle of the race. I was like, ‘You’ve got to get your act together and go harder.

“Anyway, it just all worked. The car ran great. I can’t thank (team owner) John Wright and the whole team, and I can’t thank Lisa, my wife, enough. It’s just a really, really cool experience. If anybody loves racing, look at this stuff. It’s a great series.”

In the Gold Cup class, Victor Gomez IV charged from the rear of the starting grid to take his third consecutive class victory in the No. 25 NGT Motorsport Porsche. Gomez came out on top after a spirited battle for the class lead with Kurt Fazekas in the No. 52 Kelly-Moss Road and Race entry, who started on the class pole.

“I worked hard,” Gomez said. “Honestly, it was one of the best races I’ve had in my race career. After qualifying first, I don’t know what happened. The beacon stopped working and it wasn’t an official lap, so I had to start dead last. I really worked my way through the field, and I couldn’t be happier, honestly. NGT provided a great car all weekend.”

Fazekas wound up second in Gold Cup, followed by Frank Raso in the No. 10 Topp Racing Porsche. The Yokohama Hard Charger Award – which this weekend features a custom-made skateboard in addition to a set of Yokohama ADVAN racing tires – went to Platinum Cup driver Fred Poordad in the No. 20 Wright Motorsports Porsche. Poordad earned the award by improving from 12th on the starting grid to 10th at the finish.

The second half of this week’s Barber doubleheader takes the green flag 9:45 a.m. ET (8:45 a.m. local time Sunday. The race will be streamed live on IMSA.tv.