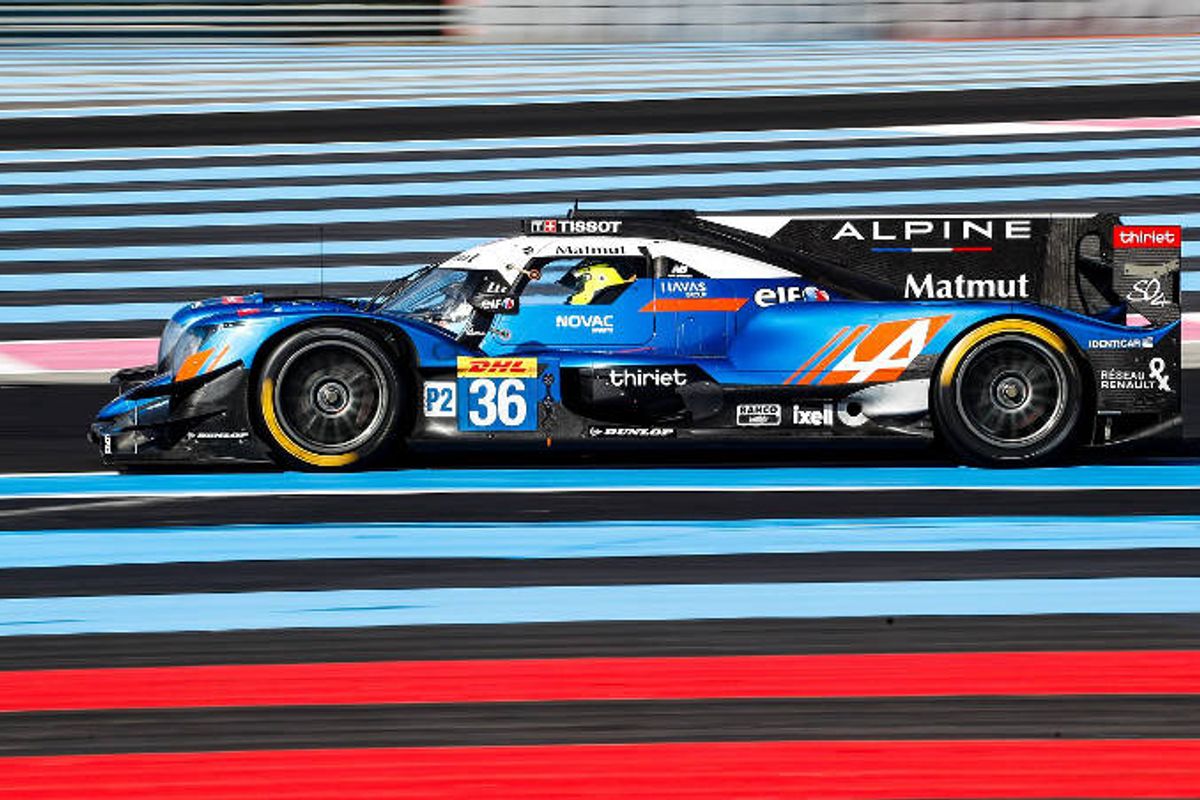 Forty-three years after the outright victory of the Alpine A442b in the 24 Hours of Le Mans, Alpine returns to the premier category of Endurance racing.

FIA WEC LMP2 World Champion in 2016, 2019 and triple winner of the 24 Hours of Le Mans, Alpine Elf Matmut Team will join the 2021 championship in the Hypercar category with modest objectives but a desire to surprise.

The Alpine A480 n°36 will be entrusted to Nicolas Lapierre, André Negrão and Matthieu Vaxiviere.

LMP2 World Champion in 2016 and 2019, the Alpine Elf Matmut Team has decided to take it to the next level in 2021 by entering the Hypercar category, the premier class of the 2021 FIA WEC Championship. The Alpine, named A480, will be emblazoned with its favourite number, #36, with which the team won the 24 Hours of Le Mans LMP2 category three times in the last five years.

The aim for the Alpine Elf Matmut Team will be to surprise in its first season in the premier class. To this end it will count on the talent of its race team and three drivers.

Frenchman Nicolas Lapierre, champion in 2016 and 2019, will join Brazilian André Negrão, with whom he has shared many successes within the Alpine team.

The crew will be completed by Frenchman Matthieu Vaxiviere, an experienced endurance competitor with four entries in the 24 Hours of Le Mans, including two podiums in the LMP2 category in 2019 and 2020.

The trio will have only one objective: to deliver maximum performance in each of the six rounds of the FIA WEC Championship and finish as high as possible.

The crew of the Alpine A480 n°36 will be on track on March 30-31 at the Circuit de Portimão (Portugal) for the official FIA WEC test session, before taking part in the first race on April 4 on the same circuit.

Quotes
Laurent Rossi, Alpine Chief Executive Officer
"With our arrival in Formula 1 and our involvement in the top category of the World Endurance Championship, the Alpine brand will benefit from a new exposure thanks to motorsport. I trust Philippe Sinault for the choice he has made as his experience and track record in this discipline speak for themselves. I note that two of the three drivers selected have already made Alpine's colours shine at the Le Mans 24 Hours and have given our brand a second LMP2 championship title in 2019. I am sure they will be able to create a good dynamic with Matthieu Vaxiviere that will meet the expectations of Alpine enthusiasts around the world."

Philippe Sinault, Alpine Elf Matmut Team Team Principal
"Today we are presenting a new trio of drivers who are up to the challenge Alpine wants to take in the Hypercar category. We have chosen drivers who complement each other in terms of experience, and whose personalities will create a good team spirit in all circumstances. Nicolas and André know each other well and have demonstrated their ability to work together for the team’s benefit, and Matthieu Vaxiviere quickly became obvious as his human qualities and speed are recognised in the paddock. I can assure you that our three drivers are as motivated as ever to make Alpine's colours shine from the very first laps of the A480 in the FIA WEC championship."

Nicolas Lapierre
"I am very happy that Alpine has decided to enter the top category of the World Endurance Championship. This is a category I know well, having competed for five seasons fighting for podiums on circuits all over the world. The Alpine team is, without hesitation, a family with whom I have achieved greatest success and I have no worries that Philippe Sinault and the members of his team will be able to prepare a car that will allow us to play a leading role from the very first races of the season."

André Negrão
"Having won everything in the LMP2 category in recent years, it was logical that Alpine decided to take up the challenge of entering the FIA WEC premier class. I am proud and happy that Alpine has decided to trust me once again to represent this brand that speaks to so many motorsport enthusiasts, especially in my country, Brazil, where Alpine has successfully manufactured and marketed cars in the past."

Matthieu Vaxiviere
"I'm already looking forward to the first tests to start working with my new team-mates, the team and to discover the car. The reputation of Philippe Sinault's team is well established, and I am confident that they will do an exceptional job in the 2021 season. Driving for a brand like Alpine is a high source of motivation for me and I will do my utmost to honour the already very rich list of achievements of Alpine in Endurance."

NICOLAS LAPIERRE (FRA)
Born on 2 April 1984 in Thonon-les-Bains (France)
FIA driver category: Platinum
With a solid record of success in the single-seater category that culminated in the 2003 Macau Grand Prix with the Signature team, Nicolas turned his attention to endurance racing in 2008. Earning his first laurels with Team Oreca Matmut, he finished third in the FIA WEC with Toyota in 2012. In three seasons with the Japanese manufacturer, he won six World Championship races. Winner in LMP2 at the 2015 Le Mans 24 Hours, he joined Signatech-Alpine for an unforgettable 2016 campaign during which he once again won the Sarthe event and the LMP2 title. Nicolas did it yet again in 2018 and 2019, winning his second LMP2 world title with Alpine. The Frenchman will be one of the pillars of the team in the new challenge represented by Alpine's ascent to Hypercar.

ANDRÉ NEGRÃO (BRA)
Born on 17 June 1992 in Sao Paulo (Brazil)
FIA driver category: Gold
Remaining true to his heritage, André crossed the Atlantic to build his experience in Europe. Exploring junior formulas on both sides of the ocean, the Brazilian launched into endurance racing with Signatech Alpine Matmut during the 2017 season. Quickly adapting to the new prototypes, André surprised with his first podium at the 24 Hours of Le Mans. His efforts earned him a place in the N°36 car at the wheel for the 2018-2019 Super season, during which he contributed to Alpine's two victories in the Sarthe event. André will be a valuable asset in the challenge of the premier class.

Matthieu Vaxiviere (FRA)
Born on 3 December 1994 in Limoges (France)
FIA driver category: Gold
After making a remarkable debut in karting, Matthieu began his career as a single-seater driver in Formula 4. He won the French F4 Championship in 2011, then took part in the Formula Renault Eurocup in 2012 and 2013 competing against Alpine F1 Team Driver Esteban Ocon. In 2014, he became a Lotus F1 Junior Team driver while participating in the Formula Renault 3.5 Series, a championship in which he finished second in 2015. In 2016, he raced in Formula V8 3.5 and the Asian Le Mans Series and by 2017, he took part in his first Le Mans 24 Hours in the LMP2 category. He obtained three podiums in the 2018 FIA WEC Championship. In 2019, he finished the Le Mans 24 Hours in third position, while having set the best race lap with a 3mins 27.611seconds. Matthieu did it again in 2020 with a second podium in a row in LMP2.