As Maserati’s first road model produced in any serious numbers, the 3500 GT was engineered by Giulio Alfieri and powered by a DOHC twin-plug six-cylinder engine derived from the racing 350S. Two body styles were offered, a Spider bodied by Vignale and a coupe with Superleggera (Super light) coachwork by Touring. Interiors were handsomely appointed with Connolly leather and equipped with useful instrumentation, while a spacious luggage compartment proved useful on long-range, high-speed transcontinental jaunts. According to published sources, as few as 2,223 examples of the 3500 GT were built in all from 1958–1964.

Accompanied by Maserati Classiche documents, this 1960 Maserati 3500 GT Coupe was produced on June 6, 1960, delivered three days later to Milanese Maserati dealer Cornaccia Automobili S.r.l., and first owned by B.C.S. Export S.p.A. Eventually sold to the US, it was later exported from Michigan to Germany in 2008 and then professionally restored using original parts and materials. This work included refinishing in factory-specified Ruby Red and new interior trim using correct Connolly leather. Following acquisition by the consignor in July 2011, the 3500 GT received sorting by Maserati specialist Bill McGrath, resulting in an award at the 2012 Graypaul Maserati Club Concours in the UK. The car history file includes copies of past registration paperwork, a Maserati use and maintenance manual and spare parts catalogue, plus detailed service invoices accumulated under the current ownership. Glamorous, fast, and luxurious, the 3500 GT remains Maserati’s definitive gran turismo of the late 1950s and early 1960s and this fine example is a truly compelling find. 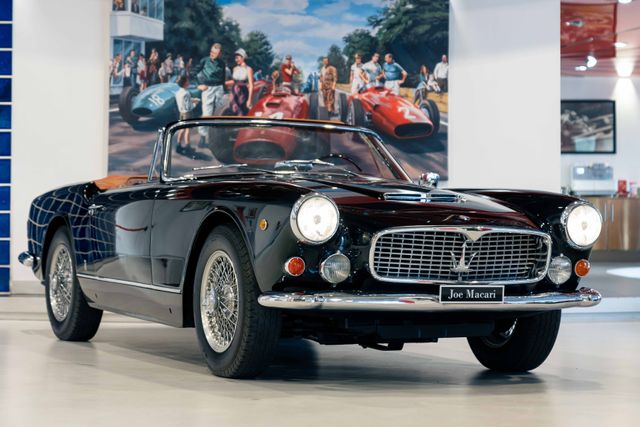