"Stage by stage, as the DB has become dominant in the Aston Martin strain, the successive cars have changed their image. Today the aim is to offer the maximum of luxury and refinement as well as the ultimate in road performance. The minor barbarities of so many great sports cars of the past are no longer acceptable – at least in the hand built models now leaving Newport Pagnell. Obviously such a car as the DB6 is expensive and exclusive but the value matches the price.' – Autocar, 1966.

As one might imagine, Autocar found much to commend in the DB6 Vantage, remaking on the car's much improved handling, outstanding adhesion and exceptionally good braking figures. A mean maximum speed of 148mph was achieved, while the standing quarter-mile time of 14.5 seconds was the fastest the magazine had recorded for a four-seater. At 120mph the Aston was as effortlessly relaxed as other powerful cars at 80mph. "For high-speed open-road touring this Vantage DB6 is practically ideal," enthused Autocar's scribe, and few would disagree.

The 4.0-liter DOHC engine remained unchanged in standard triple-SU carburetor form but the Vantage specification unit with 9.4:1 compression ratio now developed a mighty 325bhp. A ZF five-speed manual gearbox was carried over from the latter, 'Selectaride' driver-adjustable damping was standard, and for the first time there was optional power-assisted steering available. Saloon production totaled 1,327 units, including seven shooting brake conversions by Harold Radford.

Ordered with the highly desirable Vantage specification, this DB6 was among the most powerful ever produced by the British make. This DB6 Vantage was ordered new by Dr. George A. Paris of Sonora, California through the San Franisco-based dealer British Motor Cars on Van Ness St. Dr. Paris certainly knew what he was doing when he began checking the option boxes, selecting the Vantage-spec more for an extra 40 ponies, the desirable five-speed ZF manual transmission, Normalair air conditioning, 3.73:1 limited slip differential, chrome wheels, heated rear screen, Firam horns for both town and country, dual front Britax three-point seat belts, chrome wheels with knock off hubs, a power operated aerial, and a high capacity 7-pint antifreeze system. Finished in Goodwood Green over Natural Connolly hides, Dr. Paris was no doubt driving the finest motor in town when he took delivery in the latter half of 1966.

The DB6 would remain in California until 2010. Owned by a number of Aston Martin Owners Club members, the car was subject to an award-winning restoration by marque specialists Kevin Kay Restorations some 20 years ago—but the quality of the work shines in the condition of the car today. Finished in the classic color scheme of Silver Birch over Navy Blue Connolly leather with matching Wilton and wool carpets, the DB6 was gone through inside and out during the restoration. It is reported that the engine was rebuilt with new Weber carburetors installed and hardened valve seats put in place to accommodate modern, unleaded pump gas. The electrical system was converted to negative ground—in line with modern standards—and an anti-theft system with a hidden fuel cutoff operated by the foot-controlled headlight dimmer switch was installed. Not just concerned with get-up-and-go, the handling was improved with upgraded suspension componentry. Inside, a removable center console was installed while the stereo was upgraded. A selection of receipts document of of the work completed.

Acquired by the current owner in January of 2010, the DB6 has been on static display for the past 11 years and, as such, mechanical recommissioning is recommended prior to active use. The DB6 is the last of the iconic DB Aston Martins from the '60s and, with its pure form and powerful Vantage engine, the example offered here is a must-have for any Aston Martin fan. 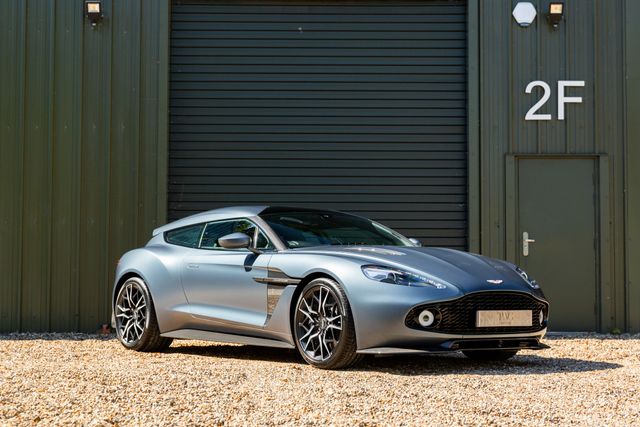