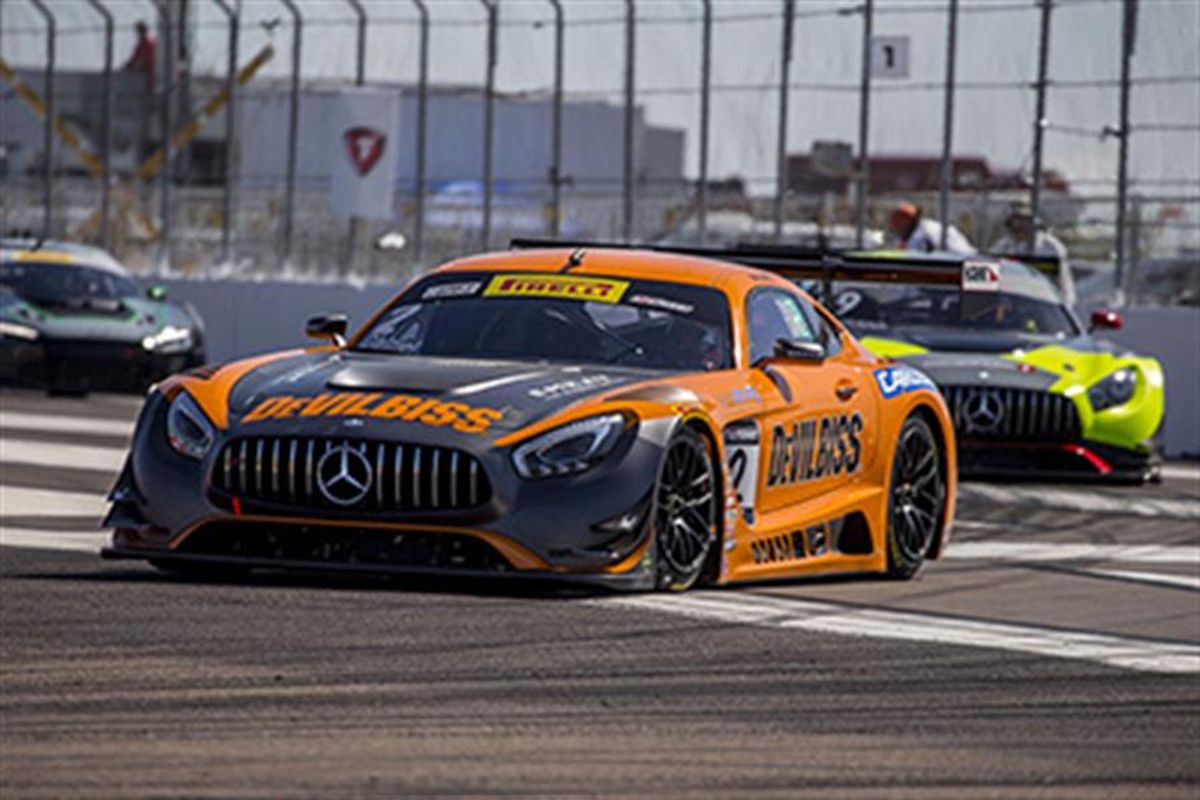 Perez Companc, driving the No. 69 Champ1 Mercedes-AMG GT3, turned his fastest time of 1:16.131 on his ninth and final qualifying lap of the qualifying session.

Tim Pappas, driving the GTA-class No. 54 Black Swan Racing Mercedes-AMG GT3, turned a top lap time of 1:17.717 on his 11th of 12 qualifying laps and will start eighth in the GTA class field.

Dalziel, Companc and Pappas, were preparing for at least one more flying lap late in the scheduled 20-minute session.

An accident by another competitor with less than five minutes remaining, however, brought out a session-stopping red flag that was soon followed by the checkered flag which concluded qualifying. The early end to qualifying took away any chance the Mercedes-AMG GT3 competitors had to improve their qualifying times in the session’s final minutes.

The GT and GTA classes will share the track and race at the same time for overall and class honors in each of this weekend’s 50-minute races.

Broadcast information, live timing and scoring and more information can be found at www.world-challenge.com.

Thomas Jaeger, Mercedes-AMG Motorsport Customer Racing Program Coordinator: “Especially in the first 10 positions it was pretty close. The teams got the cars just a few weeks ago, so no one had the possibility to do a lot of testing, just a little preparation. That's why I think we will get more performance with more experience from the teams, but I am confident already for the races and hope there will be an improvement. So far we are happy to have several cars here on the grid and probably another one will follow during the year. Some improvement and some better positions for the races can be expected.”

Ryan Dalziel, Driver – No. 2 CRP Racing Mercedes-AMG GT3: “We're still learning the car, it's new to the team and also to me, but we made big gains from Thursday practice in this qualifying session. We were a second off yesterday and we're just over 3/10ths off now in a tight field. I probably could have got maybe another little bit out of it, but unfortunately we got the red flag there that last couple of minutes. We'll keep working on it and we're getting great support from Mercedes-AMG. The car is just very different for me, as I've never driven big, front-engine cars on a street course, so I am trying to be a little conservative and creep up on it. A little bit left here and we'll be OK for the race.”

Pablo Perez Companc, Driver – No. 69 Champ1 Mercedes-AMG GT3: “The red flag at the end was a shame for me and for the team but at least the main goal to finish with the car with all four wheels on it is done, so it's good. The approach that I am doing this weekend is just to finish, to survive. It's my first time on a street course so it's different, really different from everything that I have done. I also need more laps in the car. I just had one test, never really had a chance to get on the limit of the car itself, but the Mercedes-AMG GT3 is really good. I am pushing and yet I am not on the limit, so I am happy about that because I know that I have maybe a second or second-and-a-half still in me. We will continue to study and work on the car. We have a lot of potential.”