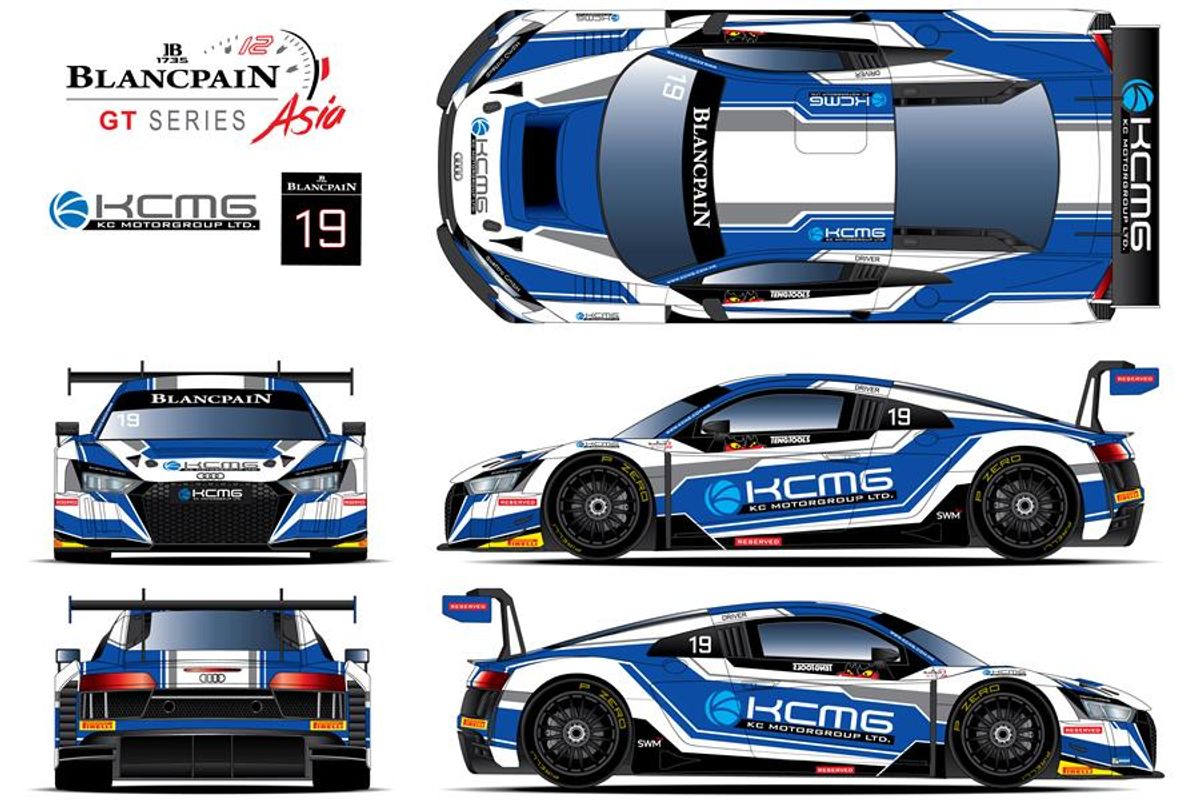 KC Motorgroup Ltd. (KCMG) is set to take on a new challenge as they unveil a two-car effort in Blancpain GT Series Asia with a pair of Audi R8 LMS GT3s this year. The Pro/Am entry of Martin Rump and Rick Yoon will race for Champion Racing by KCMG. The second car from the Hong Kong-based KCMG enters the Am/Am class with Naoto Takeda and Takuya Shirasaka.

The newly launched Blancpain GT Series Asia will feature a six-event calendar, with each round consisting of two sixty-minute races. The Asian series’ format is based on the British GT Championship – a platform lauded as one of the most successful of its kind - bringing together GT3, GT4 and GTC machinery in one grid.

KCMG is pleased to work with Audi Sport Customer Racing Asia to enter Rump’s car for full seasons in both the 2017 Audi R8 LMS Cup and Blancpain GT Series Asia, as part of the partnership agreement between both championships. Also supporting KCMG in their new Asian motorsport effort are Champion, Hidden Cliff, Hotelpass and Teng Tools.

Martin Rump: “The new Blancpain GT Series Asia is definitely a new challenge with many new aspects for myself and the team. It’s already my third year in a row working with KCMG and seeing the passion in the eyes of each team member assures me it’s going to be another good season ahead. I’m very excited to get back in the car! We know our way around the Audi R8 since last season so we should be looking strong and the entire team is looking forward to validate this at the first event at Sepang.”

Rick Yoon: “I am very excited ahead of the new Blancpain GT Series Asia’s opening race in Sepang. I have raced in two Audi R8 LMS Cup events – one with KCMG during the closing round in Shanghai. Martin and KCMG are the perfect team for me as I take on a higher level of racing as a gentleman driver. Audi R8 LMS has been my car of choice since I started in 2015 and Sepang has been one of the circuits where I’ve produced positive results. All these factors make me confident that we will have a strong performance during the season opener at Sepang.”

Naoto Takeda: “I’m thrilled to participate in the new Blancpain GT Series Asia with KCMG and to share the car with Takuya Shirasaka. I’m also looking forward to working with the entire team and with KCMG’s experience with the Audi R8, I am confident that we will be one of the competitive teams on the grid.”

Takuya Shirasaka: “It’s a great opportunity to be part of KCMG’s Blancpain GT Asia campaign. It will be very interesting to race against other top Asian teams around the region and my aim is to produce positive results with my teammate Naoto Takeda. Looking forward to seeing you all at the first event in Sepang and thank you in advance for your support.”

Ryuji Doi, KCMG Head of Motorsport: “We are excited for this latest motorsport initiative that we have in Asia. Apart from racing in a new GT series in the region, the entire crew is also looking forward to work with Martin, Rick, Takeda and Shirasaka san. Similar to our Asian Le Mans Series and Audi R8 LMS Cup campaigns, we will once again have our Asian crew to support our drivers and we’re confident that it will be a strong season ahead. On behalf of the entire team, we extend our thanks to KCMG Founder Paul Ip, our major partner Audi China and our sponsors: Champion, Hidden Cliff, Hotelpass and Teng Tools for their support.”