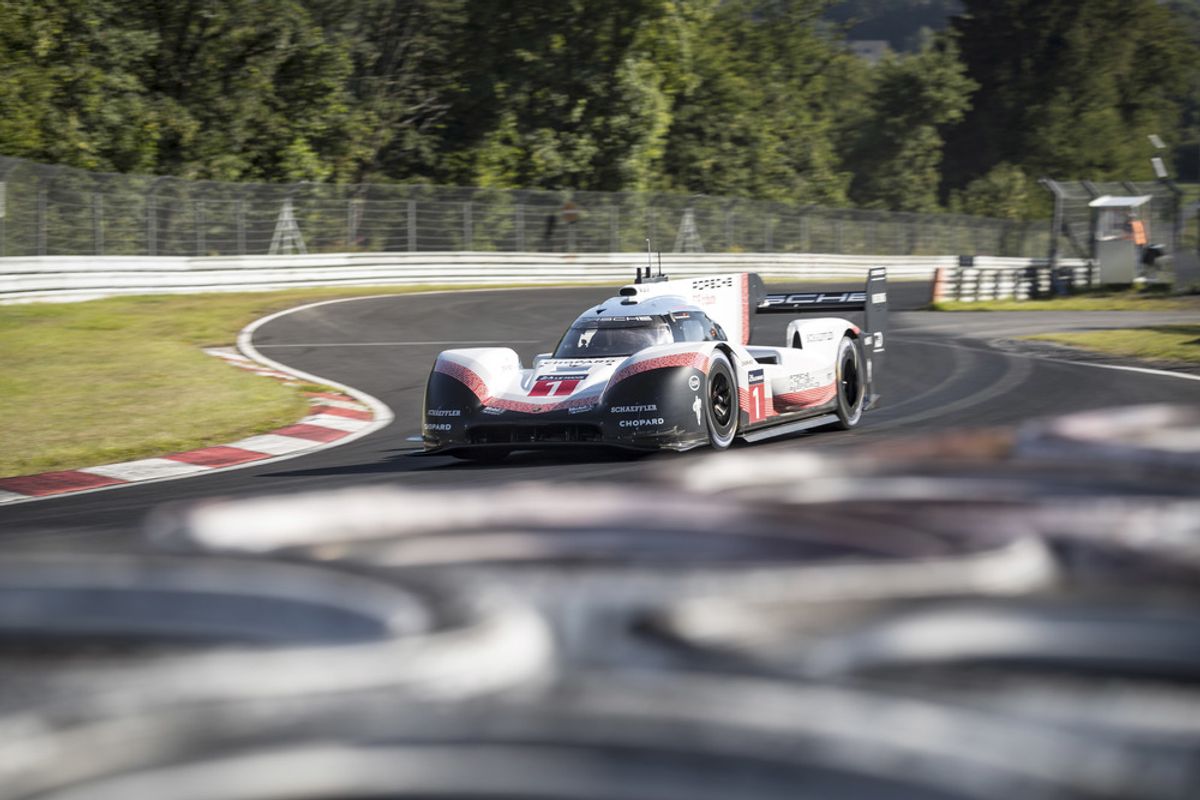 This Friday morning Timo Bernhard (D) lapped the 20.832 kilometre (12.94 miles) Nürburgring Nordschleife race circuit in 5 minutes and 19.55 seconds. This results in an average speed of 233.8 km/h (145.3 mph) on what is revered by race drivers, engineers and enthusiasts alike as the world’s most difficult track. Driving the Porsche 919 Hybrid Evo, Bernhard beat the previous lap record, set by Stefan Bellof, by 51.58 seconds.

For 35 years and 31 days Bellof’s 6:11.13 minutes record remained uncontested. The German driver from Gießen, who tragically died at Spa-Francorchamps in 1985, counted as the biggest racing talent of his time. He drove his record on May 28 in 1983 at the wheel of a powerful 620 bhp Rothmans Porsche 956 C during practice for the 1000-kilometre WEC sports car race. Also his average speed was over 200 km/h.

Proud and relieved Timo Bernhard, five-time overall winner of the Nürburgring 24-hours, two-time outright winner of the Le Mans 24-hours and reigning World Endurance Champion with the Porsche 919 Hybrid, clambered out of the tight Le Mans prototype cockpit. “This is a great moment for me and for the entire team – the 919 programme’s icing on the cake. The Evo was perfectly prepared and I have done my best on this lap. Thanks to the aerodynamic downforce, at sections I never imagined you can stay on full throttle. I’m pretty familiar with the Nordschleife. But today I got to learn it in a new way”, said the 37-year old from Bruchmühlbach-Miesau in the German region of Saarpfalz. He is a huge admirer of Stefan Bellof. In 2015, on the thirtieth anniversary of Bellof’s fatal accident, Timo raced at the Spa-Francorchamps 6-hour race of the FIA World Endurance Championship with a helmet carrying the famous black-red-gold design of the 1980s star. “For me Stefan Bellof is and remains a giant”, he emphasises. “Today my respect for his achievement with the technology available back then increased even more.”

Today’s success is the second track record on the Porsche 919 Hybrid Evo tally: On April 9 this year in Spa, the dramatic evolution of the three-times Le Mans winner lapped faster than a Formula One car with Neel Jani at the wheel. The 34-year old Porsche works driver from Switzerland – Le Mans outright winner and Endurance World Champion of 2016 – set a lap of 1:41,770 minutes on the 7.004 kilometre (4.35 mile) Grand Prix circuit in the Belgian Ardennes mountains. He topped the previous track record, set by Lewis Hamilton in 2017 qualifying, by 0.783 seconds. The British Mercedes driver took pole position for the Belgian Grand Prix in 1:42.553 minutes.

The Evo version of the Porsche 919 Hybrid is based on the car that took outright victory at the Le Mans 24-Hours and won the FIA World Endurance Championship in 2015, 2016 and 2017. Over the winter, it was freed from some restrictions hitherto determined by the regulations. Thus, its hybrid power train now develops a system output of 1160 hp. The Evo weighs only 849 kilograms and its modified (and now active) aerodynamics generate over 50 per cent more downforce compared to the WEC model. Top speed at the Nürburgring was 369.4 km/h (229.5 mph).

LMP Team Principal Andreas Seidl commented: “As a race team we constantly search for challenges that push a car, driver and team to operate on the limit. Conquering the “Green Hell” definitely provided such a challenge. Since last winter we were preparing for that task together with our tyre partner Michelin – painstakingly and with a great deal of respect for this track. Today we have shown the full potential of the 919 Evo. Congratulations to Timo for his sensational drive. Being a record winner at the Nürburgring, Timo was the logical choice for the job. Balancing attack and caution at all times was mandatory on this circuit. Safety is the highest priority. In this regard, I also like to thank the Nürburgring team. Porsche cultivates a long and deep relationship with the ‘Ring. Record attempts wouldn’t be possible without the highly professional track support.“

Fritz Enzinger, Vice President LMP1, added: “A big thank you goes to our development team in Weissach and the crew on site for the focused and safe operation of this record attempt. It is terrific what our team has achieved in four years in the World Endurance Championship: From 2015 to 2017 three overall wins in Le Mans and three drivers’ and three manufacturers’ world championship titles. This isn’t easy to be reproduced by anyone. The Tribute Tour is our homage on these years. We didn’t want to see the most innovative race car of its time disappearing unceremoniously in to the museum. Thanks to the support from our partners, we were able to develop the Evo version of the Porsche 919 Hybrid for record attempts.”

Unchained for the record
The technical regulations from the FIA for the WEC and Le Mans, introduced in 2014, successfully delivered close competition between the conceptually very different class 1 Le Mans hybrid prototypes entered by Audi, Porsche and Toyota.

To prepare the 919 Evo record car, the base was the 2017 world championship car. On top came developments that were prepared for the 2018 WEC but never raced after the withdrawal at the end of 2017. Additionally, several aerodynamic modifications were made.

For the Porsche 919 Hybrid Evo the entire hardware of the power train remained untouched. The 919 is powered by a compact two-litre turbo charged V4-cylinder engine and two energy recovery systems – brake energy from the front axle combined with exhaust energy. The combustion engine drives the rear axle while the electro motor boosts the front axle to accelerate the car with four-wheel drive. At the same time it recuperates energy from the exhaust system that otherwise would pass unused in to the atmosphere. The electrical energy that comes from the front brakes and the exhaust system is temporarily stored in a liquid-cooled lithium ion battery.

The WEC efficiency regulations limited the energy from fuel per lap by using a fuel flow meter. The V4 combustion engine’s output back then was around 500 hp. Freed from these restrictions, equipped with an updated software but running the regular race fuel (E20, containing 20 per cent bio ethanol), the Evo version delivers 720 hp.

Because the amount of energy from the two recovery systems that could be used was limited as well in terms of electric megajoule per lap, the systems stayed far below their potential. With now full boost being available, the e-machine output increased by ten per cent from 400 to 440 hp.

The engineers also unchained the aerodynamics of the 919 Evo from the regulations. The new larger front diffuser now balances the new and very large rear wing, both of which have actively controlled drag reduction systems (DRS). The hydraulically operated systems trim the trailing edge of the front diffuser and opens up the slot between the rear wing main plane and the flap respectively in order to reduce drag. Underneath the Evo the turning vanes and floor have been optimised. Fixed height side skirts increase the aerodynamic performance again as efficiently as possible. In total the aero modifications resulted in 53 per cent higher downforce and an increase in efficiency by 66 per cent (compared to the 2017 Spa WEC qualifying).

To help further expand the performance envelope, the Evo gained a four-wheel brake-by-wire system to provide additional dynamic yaw control. Furthermore, the power steering was adapted for the higher loads and stronger suspension wishbones (front and rear) were designed.

Compared to the car in conventional race trim, the dry weight was reduced by 39 kilograms to 849 kilograms. To achieve this, air-conditioning, windscreen wiper, several sensors, electronic devices from race control, lights systems and the pneumatic jack system were removed. Michelin developed special tyre compounds for the 919 Evo that produces more downforce than a Formula One car.

Hybrid system:
KERS with a motor generator unit (MGU) mounted on the front axle; ERS for recuperation of energy from exhaust gases. Energy storage in a liquid-cooled lithium-ion battery with cells from A123 Systems