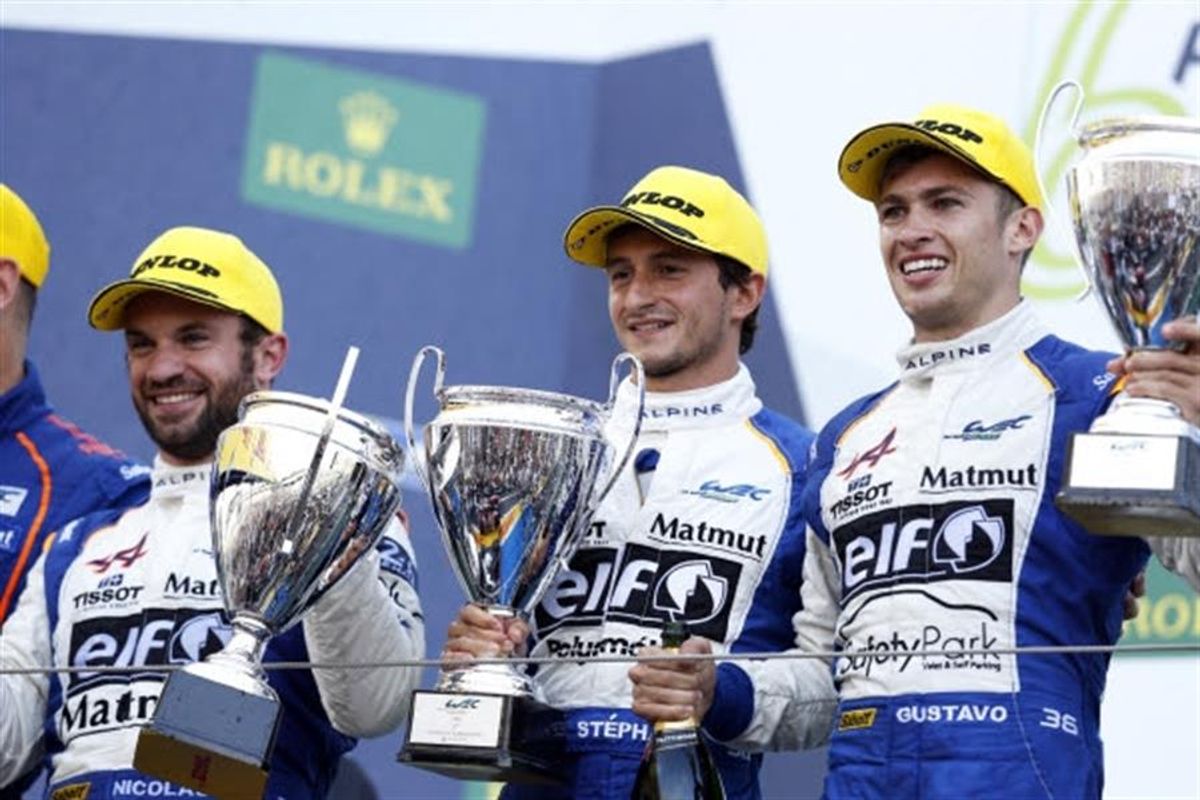 Even before they climbed onto the top step of the podium at the Nürburgring, Nicolas Lapierre, Stéphane Richelmi and Gustavo Menezes’ weekend had already been a rollercoaster ride of emotions! At the start of the opening free practice session on Friday morning, a mistake by Nicolas gave Signatech-Alpine’s crew of mechanics an early challenge to repair the car in time to allow its three drivers to return to the track and begin their preparations that afternoon.

On Saturday morning, both Alpine A460s were on the pace, with the N°35 Baxi DC Racing Alpine entry and the N°36 Signatech-Alpine lapping respectively third and fourth-quickest during the final free practice session.

Richelmi and Menezes proceeded to qualify the N°36 second on the grid amongst the LMP2 class protagonists, with Panciatici and Cheng posting the tenth-best time in the sister car.

Today’s 6 Hours of Nürburgring got underway at 13:00 under sunny skies. Richelmi maintained second position in the early stages, as Panciatici gained a spot to run ninth.

It was not long before the N°35 crew adapted its strategy, with Cheng taking over behind the wheel. Once the field began to space out, Nelson returned to the cockpit while Menezes similarly replaced Richelmi in the N°36.

After battling against two rivals for the LMP2 class lead, Gustavo seized the advantage just before mid-distance and notwithstanding repeated ‘Full Course Yellow’ interventions, Signatech-Alpine stuck firmly to its plan and the American ended his stint still in front.

Lapierre was the last of the trio to jump into the N°36, with just over two-and-a-half hours remaining to the chequered flag. Remaining mindful of the gap to Bruno Senna behind, he managed the margin to perfection to bring the car home for its third consecutive triumph.

Chinese ace Tung was behind the wheel of the N°35 for the final two hours and produced a solid performance to climb to seventh place.

The result has enabled the N°36 Signatech-Alpine crew to extend its championship lead to 38 points over its closest pursuer. The N°35 Baxi DC Racing Alpine trio sit tenth.

Bernard Ollivier, Deputy Managing Director of Alpine: “For Alpine, to win here in Germany at such a legendary sportscar circuit is a very special moment, which further confirms the strength of our programme! It is true that our car was perhaps not the fastest this weekend, but the entire team stuck to its guns throughout and this victory is a richly deserved reward. I must commend the motivation and professionalism of the winning N°36 crew. They might be endurance racing rookies, but both Gustavo Menezes and Stéphane Richelmi already look every bit as experienced as Nicolas Lapierre! I said before the start of the season that we have a ‘dream team’ – and they are proving that each and every weekend. I am confident that the N°35 crew will take inspiration from their team-mates’ success to kick-start their own season.”

Philippe Sinault, Signatech-Alpine Team Principal: “Our team truly showed its strength this weekend. We got off to a shaky start with the accident for the N°36 in the first free practice session, but we kept our composure and our concentration. Over a single lap, we perhaps gave away a little bit to our main rivals. We elected to nominate Stéphane Richelmi for qualifying as he felt particularly confident here and he did an excellent job, both then and in the early stages of the race. I am delighted with this third victory of the campaign, because it is always difficult to maintain focus after winning the Le Mans 24 Hours. We are also happy to see the N°35 finish inside the points, which gives us plenty of positive momentum heading into the second half of the season.”

Nelson Panciatici: “To finish this race inside the points is a positive conclusion. I was in the car for the start, but overtaking was extremely tricky so we had to adapt our strategy. I pitted to hand over to David before taking over again halfway through, and that enabled us to better exploit our potential. I am satisfied with the way I drove today and everything went well. We still have some progress to make in terms of our overall performance and the way the three of us work together, but this result gives us a solid foundation upon which to build over the forthcoming races.”

Ho-Pin Tung: “It’s a relief to make it to the end of the race after two consecutive retirements, and although seventh place is by no means reflective of our full potential, we will continue working hard to achieve what we know we are capable of. I was in the car for the final three stints, so I needed to remain mindful of tyre wear but I think I managed the situation well. Thankfully, it was dry today, which was far easier to deal with than the mixed conditions we saw at the beginning of the weekend! Congratulations to our team-mates in the N°36 entry on another victory, which proves what can be accomplished with the Alpine A460. We know where we need to improve, both as drivers and with the car.”

David Cheng: “The weekend got off to a reasonably good start and we settled into a solid rhythm in free practice but then during qualifying, unfortunately, I had contact with another car at the beginning of my run, after which it started to rain and I was unable to find a clear lap. The upshot was that we ended up a long way down the grid for the race but the team did an excellent job and everything from our strategy to our driver changes worked well. Throughout my first stint, I managed to keep the car that ultimately finished third behind me, which proved our potential. The ‘Full Course Yellow’ periods didn’t play out in our favour, but that is one of the vagaries of racing. Congratulations to the N°36 crew on their success, which gives us even more motivation to improve!”

Nicolas Lapierre: “This is a fantastic result for the whole team, which leaves us in a very strong position in the championship. We had a difficult start to the weekend when I went off, which cost us some early track time around a circuit that is not one of my favourites so taking that into consideration, to line up second in qualifying was extremely encouraging. We established a good rhythm in the race, and it was a shame that our battle with G-Drive didn’t go on a bit longer! When I took over behind the wheel, my team-mates had already done much of the hard work so I simply needed to consolidate our position and bring the car safely home.”

Stéphane Richelmi: “It was great for my experience that the team allowed me to qualify the car and take the start of the race. In the early laps, the G-Drive entry was a bit quicker than us, but we weren’t concerned because we knew we were on different strategies. I had to contend with quite a high rate of tyre degradation, and it wasn’t always easy to know what the best approach would be. Gustavo and Nicolas then did a perfect job over the remainder of the race, and it’s brilliant to secure a third straight victory and in so doing further extend our championship lead.”

Gustavo Menezes: “I’m absolutely thrilled with the way this season is going! After finding ourselves on the back foot at the beginning of free practice, the team dug deep to ensure the delay affected us as little as possible. Ultimately, it’s fair to say we weren’t quite as quick as some of our rivals over a single lap, but that’s not the be-all-and-end-all in a six-hour race. I was pleased with my stints in the car and it was great to be able to hand over to Nicolas from the lead. Signatech-Alpine is helping me to develop as a driver and make consistent progress, and now I’m excited about maintaining that upward momentum over the next couple of races back home in North America!”