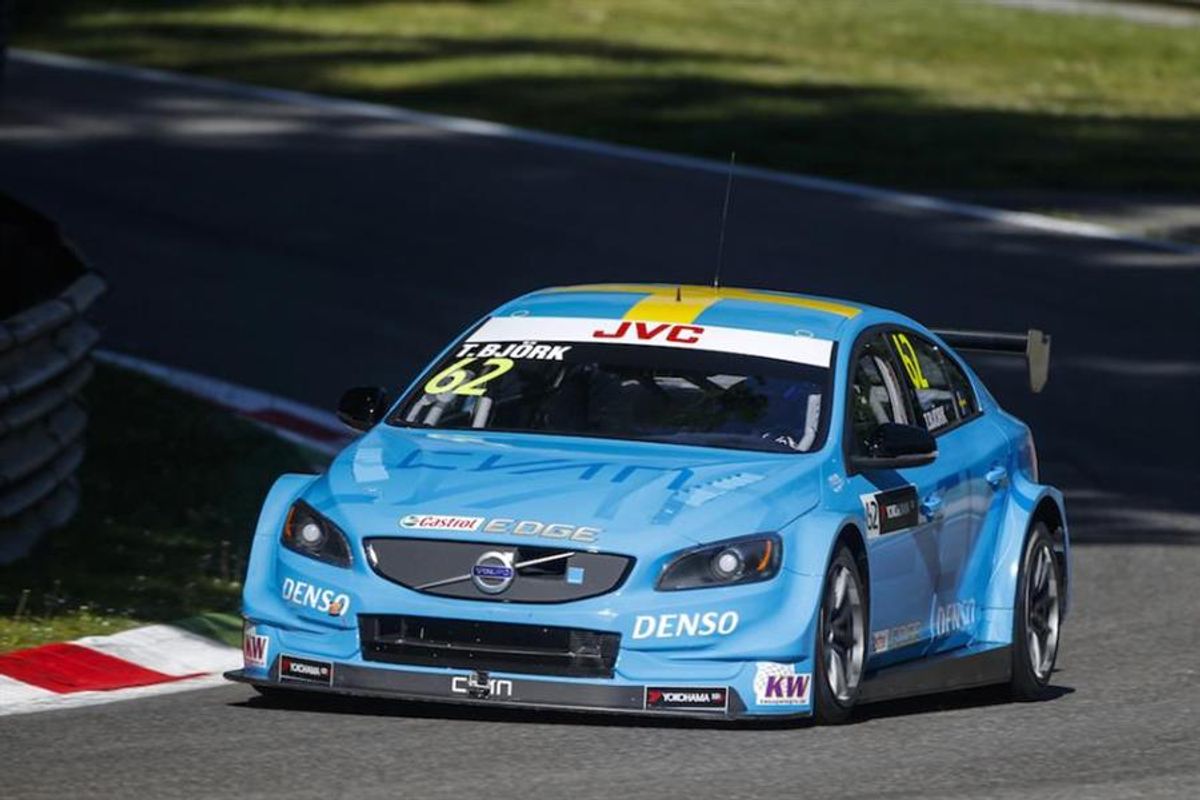 Polestar Cyan Racing’s Thed Björk will start the Main Race at WTCC OSCARO Race of Italy at Monza today from pole position after topping qualifying for the first time in the FIA World Touring Car Championship.

The Swede dramatically jumped to the top of the times with the final run in the Q3 top-five shootout to bump Castrol Honda World Touring Car Team’s Tiago Monteiro down to second for what was also Volvo Polestar’s first qualifying best. Björk becomes WTCC driver number 25 to take pole in the world championship, while Tom Coronel will start the reverse-grid Opening Race at the front for the second time in as many events.

Rob Huff, running without the benefit of team-mates to tow him around the legendary parkland circuit, was the star of Q1. He jumped from P13 to the top of the times with six minutes to go in his ALL-INKL.COM Münnich Motorsport Citroën C-Elysée WTCC. The Briton then lowered his own benchmark on the following lap with a time of 1m52.754s.

But the Volvo Polestars worked brilliantly as a team, running as a three-car train. The trio crossed the line with three minutes of Q1 to go and bumped Huff to fourth. Néstor Girolami was on top with a 1m52.218s to head Polestar team-mates Björk and Nicky Catsburg.

The three Volvos, Monteiro and Huff topped the timesheets in Q2 to make it through to the shootout. Huff was the first to go in the nail-biting one-at-a-time climax to the session. The Briton set a target of 1m52.968s and looked delighted with his effort.

Girolami was next to go, but buckled under the pressure and cut the second chicane, automatically annulling his time. Catsburg followed Girolami, but couldn’t bump Huff from the top spot.

Now Monteiro set off on his lap. In the first two sectors he was fastest overall, but ran wide on the exit of Ascari. Still, his time of 1m52.821s was enough to push Huff from pole position.

But Björk was still to go and the Swede held his nerve to take pole with a 1m52.505s – obliterating Yvan Muller’s previous pre-TC1 WTCC qualifying lap record from 2013 by almost four seconds. “It feels great!” said Björk. “I had a really good car from the beginning of qualifying. I pushed a little bit too hard at the last corner – it was a little bit too tight. But I lifted a little and it was okay.”

Privateer Coronel at the front for Opening Race

Tom Coronel clinched a dramatic reverse-grid DHL Pole Position for the FIA World Touring Car Championship Opening Race at Monza. The Dutchman left it late to set a lap in Q2 and set ninth best time among the 12 runners. He needed 10th position for the reverse-grid pole, and Sébastien Loeb Racing’s Mehdi Bennani obliged by then beating his time and knocking the ROAL Motorsport Chevrolet RML Cruze TC1 into the prize spot. “I’m very happy,” said Coronel. “This was the goal we had. I made a big mistake behind Tiago [Monteiro] on my first run, so on the last run I had to do it alone and I played it safe to get into the top 10. I know I cannot be completely in front [on pace] so these are our chances. The moment of fame is ours, at least for the first race.”

The FIA WTCC OSCARO Race of Italy weekend continues on Sunday with the Opening Race at 12h15 local time and the Main Race scheduled for 14h15 local time. Both races will be broadcast live around the world.