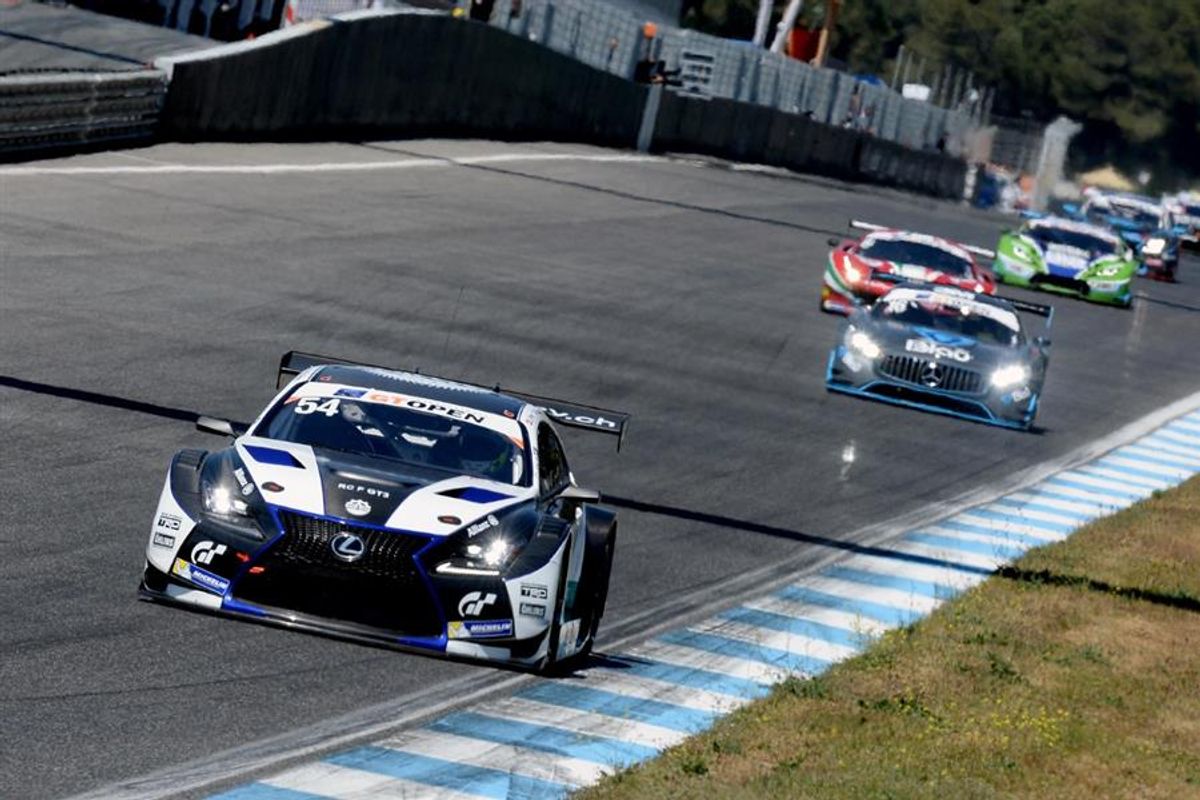 The new RC-F takes Race 1 at Estoril, beating the McLarens of Balfe-Bell (Balfe
Motorsport) and West-Ledogar (Garage 59), who make 1-2 in Pro-Am
In GT-Am, Basso-Figuereido also win at debut, with Sports&You Mercedes

The 2017 International GT Open season started with a surprise, as the brand new Lexus RC-F took victory in Race-1 in Estoril in what was the race debut of the Japanese coupé.

The Emil Frey Racing car of Albert Costa and Phillip Frommenwiler ran a perfect race in the closing laps beating the two McLarens 650S of Rob BellShaun Balfe (Balfe Motorsport) and Côme Ledogar-Alex West (Garage59) who had alternated at the top until then.
The McLarens made it 1-2 in the Pro-Am rankings.

The other Lexus of the Farnbacher brothers took fourth, confirming the successful debut of the RC-F, ahead of the two Lamborghinis of Giovanni Venturini-Thomas Biagi (Imperiale Racing) and Tonio Liuzzi-Hiroshi Hamaguchi (FFF Racing), the latter taking third in Pro-Am.
In Am, the Brazilian pair Marcio Basso-Nonô Figueiredo also had a debuting debut in the Sports&You Mercedes AMG, beating the sister MS Racing car of Hrachowina-Konrad and the Teo Martín BMW M6 of Barreiros-Guedes.

THE RACE - Good start from Bell, while Ledogar steals second from Costa. Then Khodair, Cioci, Venturini, Farnbacher, Liuzzi and Onslow-Cole. Initial laps see Ledogar reducing the gap on Bell while Postiglione takes 10th from Rueda. The hottest duel is between Khodair and Cioci for fourth, with the Brazilian resisting perfectly to the attacks of the Italian.

Marcio Basso leads in Am, after a contact has sent Coimbra to the back, while Benham touches Ling in lap 10 and gets past. The first BMW (Beirão) is 11th, right ahead of Ramos. They hold a group comprising also Rueda, Witt, Calamia, Benham and Ling.

On lap 15, Bell has a 3-second advantage on Ledogar and 6 on Costa, followed by Khodair, Cioci, Venturini, Liuzzi, who has passed Farnbacher and Onslow-Cole. First to stop for driver change are Hrachowina and Dunbar. End of lap 24, it is the first four to stop.
Once all cars have pitted, in the only race of the year with no handicaps, West leads ahead of Balfe, thanks to having exited the pits in front; then Frommenwiler, Biagi, Farnbacher, Hahn, Perazzini and Hamaguchi. But it is clearly the charge from some top drivers like Da
Costa, Tappy, Mac, Bouveng, Meadows and Sini, all beyond 10th, to put the show.
Figueiredo with the Sports&You Mercedes keeps the leadership in Am.

On lap 30, Perazzini touches Hahn at the hairpin sending him into a spin, and both are passed by Hamaguchi.
At the same time, the top 3 are now nose-to-tail, while Farnbacher has passed Biagi for fourth and Da Costa is 7th but will not climb more positions. Fontana (puncture) and Sini (twice) visit the pits, with the Aston trying set-up changes for Sunday.

Frommenwiler attacks Balfe for 2nd, which gives some breathing space to West. On lap 35, Frommenwiler passes Balfe at the end of the straights and immediately after, the Swiss takes the lead as West is wide and out of the track in one of the fast corners. There won’t be anymore changes, except for a fight between Perazzini, Tappy and Mac for 8th, which is won by the Dane.

Albert Costa: “It is really an unexpected result, as we only discovered the car on track on
Monday, but the basis of the new RC-F seems excellent and we worked well. In the race
things turned out nicely for us, staying always among the front-runners and with Philipp
doing a really strong second stint.”

Philip Frommenwiler: “It’s great to start this ways, and very pleasant to have a number
of Lexus people with us for this great debut. We know things won’t be always as
successful, as the series is very competitive, but for the time being, let’s enjoy this great
moment!”