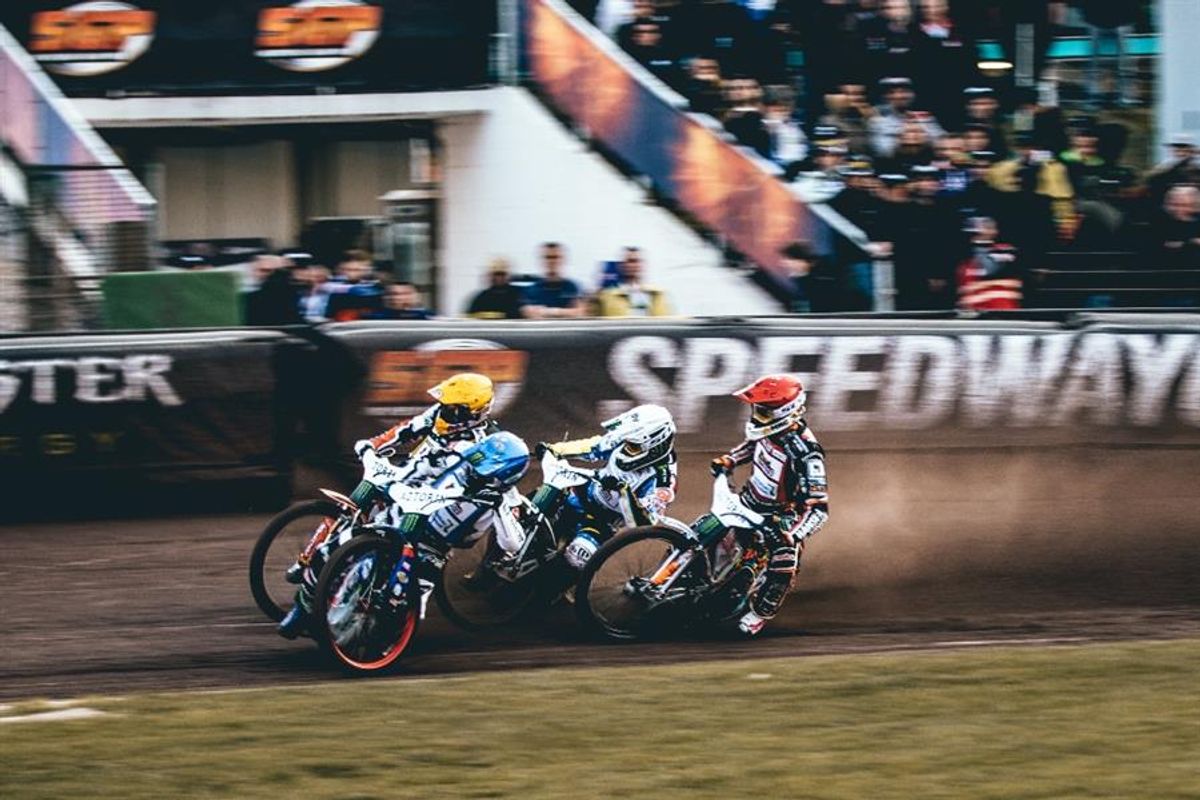 The newest member of Monster Energy’s Speedway roster kicked off his Grand Prix career in style by taking an impressive third place at the opening event of the season and throwing down the gauntlet to his rivals.

Patryk is in his very first year as a full-time SGP rider and he’s doing it with the M-claw on his helmet, and he couldn’t have got off to a better start.

Surrounded by the mountains of Krsko the Matija Gubca Stadium offers a serene setting for the season opener and the fans turned out in force to watch their speedway heroes do battle on a track that was under water just 24 hours prior to the start.

The inclement weather conditions curtailed the official practice the day before and the track proved to be a difficult puzzle for the riders to work out, which put extra emphasis on making a good start and getting your nose in front early.

It was something that Patryk did perfectly by winning his first two with time to spare, as did current World Champion Greg Hancock, while Tai Woffinden and Chris Holder also started their night well.

As the track got harder and harder to read the competition heated up and Dudek struggled to adjust, but a rocket start in the Semi-Final secured him a place in the Grand Final and a chance to taste SGP glory for the first time.

He just couldn’t get his wheels ahead early on and had to settle for third place, but it was a supremely impressive beginning to what is certain to be a long career at the top level.

Hancock, aiming for his fifth World Title, registered 11 points but couldn’t make the Final while Woffinden and Holder missed out on the Semi’s with eight and six points respectively.

The meeting was won by Slovakian new boy Martin Vaculik who was perfectly dialled in to the track all night. He made a lightning start in the Final and rode four wheel-perfect laps to take home the trophy.

Here’s what our boys had to say after a challenging night of tough racing;

“Before the meeting I was a little bit nervous, it was my first time in the Grand Prix so I had a few nerves but the first heat for me was really good and I was high after that. I feel good, I don’t know what happened later in the meeting, I had a few little problems with the set-up but the important thing is that I had a good finish. Third place – a lucky night for me! The first races, the track was very difficult but later on it was good, this is Speedway not MotoGP so you need some dirt. We have 11 rounds left, I hope it will be good for me but we will see.”

“I’m pleased to come away with some decent points but I’m greedy so when I get to the Semi’s I then want to get to the Final. We haven’t had much riding this year so it’s good to get the first one out of the way. Trying to get your set-up was so hard, the track didn’t really allow for a lot of combinations with the bike but it’s the same for everybody, but it’s a shame when the result is determined at the start and the only way to pass someone is if they make a mistake. It was good to blow the cobwebs off, it was a total roll of the dice for everybody but I just wish they would’ve made a better track for us to race on.”

“If I could explain what the track was like today you’d be apologising for my language. Some of the boys made some better starts and that’s all tonight was, it was about making starts and nothing else. Two of my races I made a good start and two I didn’t, so I’ve got nobody to blame but myself. They had 24 hours without rain and the track was like it had been raining all day, so it was a complete mess-up by the people that organise it. It’s a joke, after all these years we can see what a weather forecast says so why wasn’t the track covered up yesterday? It’s rubbish. I guess it is what it is and it’s on to the next one now.”

“It was really hard work at the beginning, I started off okay but then the track changed and it was hard. There was no passing at all, it was just one line and I couldn’t make good enough starts, I had two bad races in the middle and that killed me really. I feel like I was making good starts myself but the bikes just wouldn’t get me to the corner fast enough, I just got eaten up a bit. I found something a bit better towards the end but it was too late by then.”