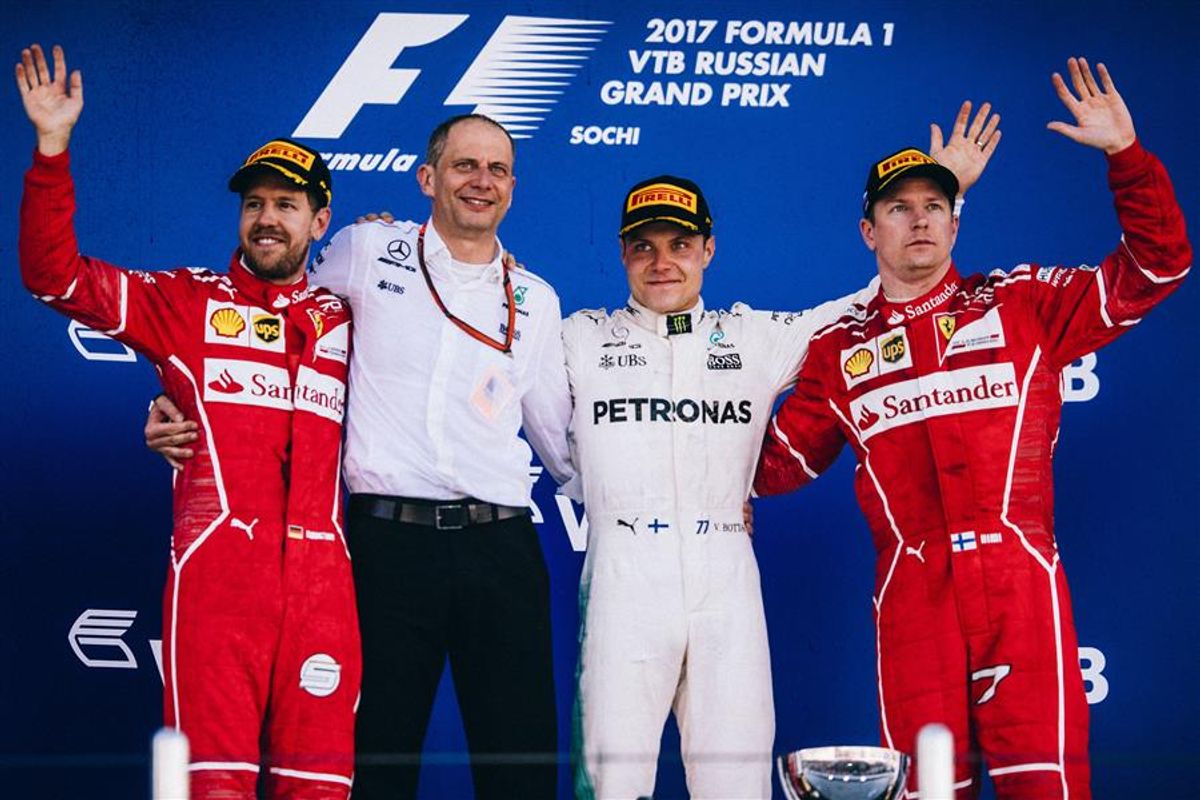 A front row lock-out in qualifying and both cars on the podium at the end of the race, courtesy of Seb Vettel and Kimi Raikkonen finishing second and third respectively in a Russian Grand Prix that was settled in two moments; the start and the final lap. Thanks to this result Seb extends his lead in the Drivers’ classification over Hamilton, who finished fourth today, to 13 points. In total the Scuderia walks off with 33 points thanks to Kimi also making it to the podium for the first time this season.

There was a worrying moment with the need for an extra formation lap, when Alonso was forced to park his stop his car on track. At the start, Bottas managed to get ahead of Seb and Kimi, who did a good job of fending off Hamilton, in the long run down to the first turn. But the Safety Car was called out immediately following the Palmer-Grosjean collision.

At the end of the third lap, the race was on again and the positions at the front remained unchanged. Drivers were able to use the DRS from lap 6, but there was a long way to go, so managing the race was on the agenda. Seb posted a quickest lap on lap 16 and a long-distance battle continued. With track temperature reaching 45 degrees, tyre blistering was a concern, but at this stage, Seb’s lap times were improving and on lap 23 he posted another fastest lap. Kimi also raised his pace. Bottas pitted on lap 27 and took on Supersofts. The first of the two Ferraris to stop, while now leading, was Kimi on lap 29, switching from the Ultrasofts to the Supersofts. On lap 31, Hamilton pitted with Seb staying out, even improving his split times.

Come the end of lap 34, it was time for Seb to change tyres and he rejoined in second place, ahead of Kimi who was running at a great pace. Five laps later, Bottas flat-spotted his left front when he braked right on the limit and Seb made the most of it to close to within 2.2 seconds. The gap dropped below 2 seconds towards the end and the Ferrari No. 5 set another fastest lap to get within DRS distance, with Kimi still fastest. In the end, it was traffic on the final lap that decided it all, when Massa blocked Seb’s attempt to pass him. Then the finish came in a flash and the Ferrari crossed the line just 6 tenths behind, with Kimi a comfortable third.