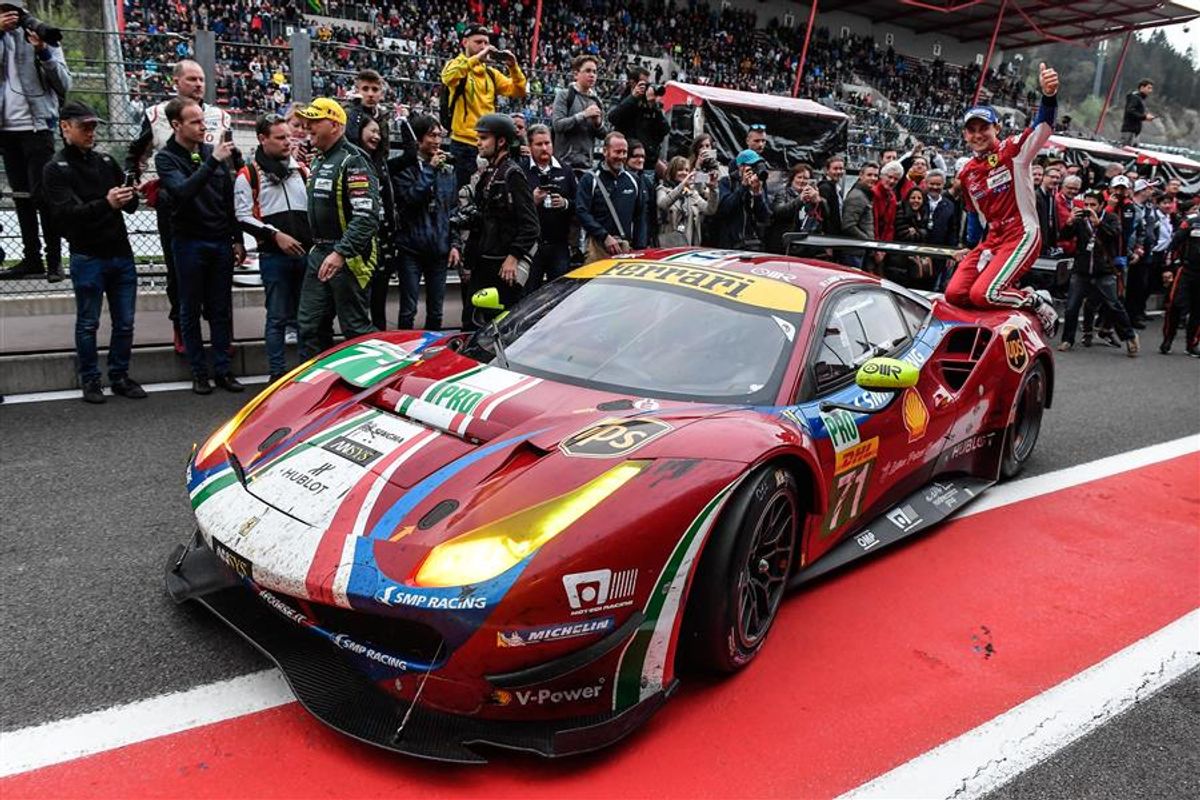 Ferrari pulled off a resounding one-two in the GTE-Pro class at the 6 Hours of Spa-Francorchamps, the second round of the World Endurance Championship (WEC). Davide Rigon and Sam Bird, with the 488 GTE no. 71 of AF Corse, repeated last year’s triumph in the Ardennes, finishing a few seconds ahead of teammates Alessandro Pier Guidi and James Calado in car no. 51.

This result puts Ferrari ahead of Ford in the Constructors’ championship, while the two crews are joint second in the drivers’ rankings. Ferrari also took a podium in the GTE-Am class with the 488 GTE of Clearwater Racing driven by Mok Weng Sun, Keita Sawa and Matt Griffin.

GTE-Pro. Davide Rigon started the race on pole and then maintained his lead over the two Fords. After about 40 minutes difficulty in lapping for the first Fords compacted the cars from second to fourth, allowing James Calado, in Ferrari no. 51, to pull off one of the greatest overtaking of recent years.

The British driver pulled up beside both American cars on the Kemmel straight and then completed the move entering Les Combes. After the first pit stop the Ferraris found themselves chasing the Ford of Olivier Pla who had not changed tyres.

On a track where heavy tyre consumption played a big role, the two 488 GTEs easily made up the gap and were in a position to go on the attack. Alessandro Pier Guidi, in car no. 51, overtook the Ford before Eau Rouge but then was held up by a Toyota that pushed him wide at Les Combes. At that point Sam Bird in no. 71 closed the gap and attacked his teammate. The 488 GTEs came into contact but were both able to continue the race with car no. 71 ahead of no. 51.

The turning point came at the beginning of the fourth hour, when for the second time the race was neutralised with a Full Course Yellow obliging everyone to cut their speed to 80 km/h. Both Ferraris entered the pitlane and gained a lot of time on all their opponents. At the restart the two Ferraris were very close together but had a lead of almost a minute over Ford no. 66, in third.

Towards the end, tyre management recommended a change to the team of car no. 51, during which Calado replaced Pier Guidi. However, the team decided to take a risk with no. 71 by just refuelling. Sam Bird finished ahead of Calado and the Ford no. 66 of Pla-Mucke-Johnson. With this triumph, Ferrari’s 18th in the GTE-Pro class, the Maranello brand leads the Constructors’ Championship with 72 points against Ford’s 65. Priaulx-Tincknell-Derani (Ford no. 67) top the drivers’ standings on 38 points against 36 for the two Ferrari crews.

GTE-Am. Ferrari secured a podium finish in the GTE-Am class. In a difficult race the 488 of Clearwater Racing crewed by Mok Weng Sun, Keita Sawa and Matt Griffin finished ahead of Miguel Molina, Francesco Castellacci and Thomas Flohr on the other Ferrari entered by Spirit Of Race team. The class victory went to the Aston Martin of Dalla Lana-Lamy-Lauda, while the Toyota of Buemi-Davidson-Nakajima was the overall winner.

The next round is in mid-June with the 24 Hours of Le Mans.