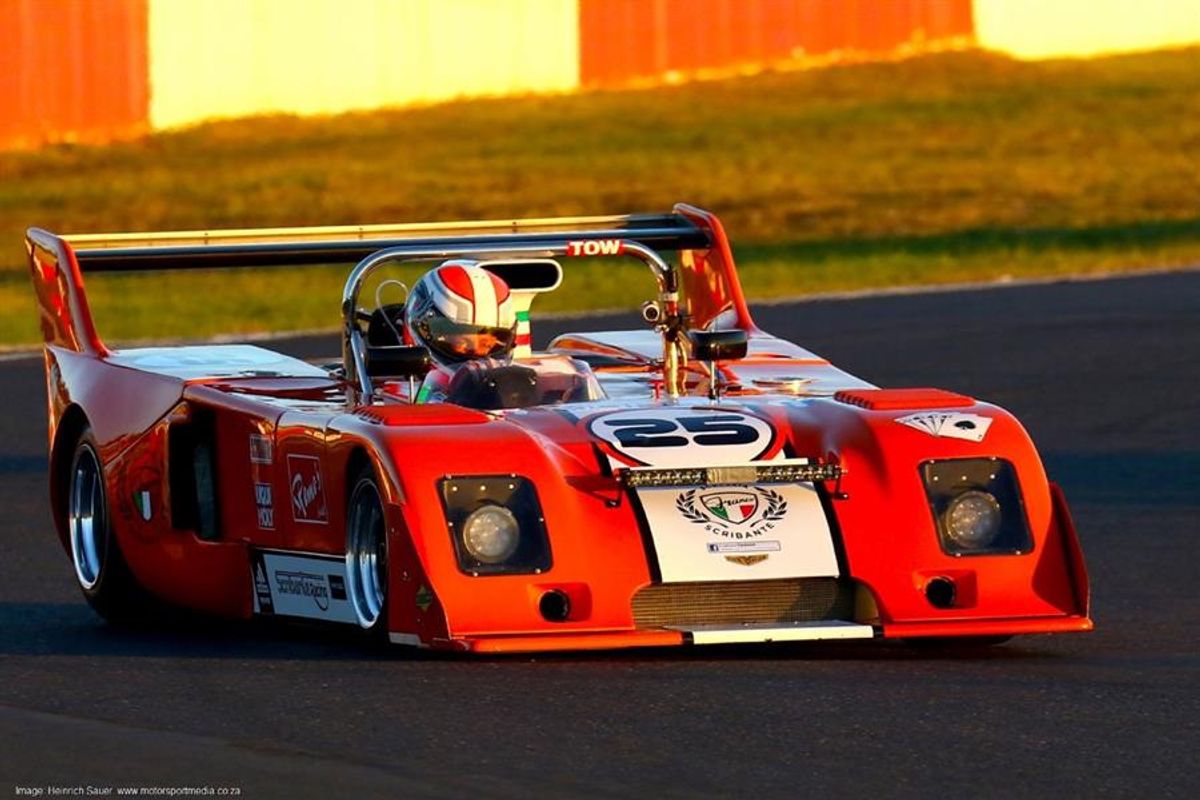 Sensational sting in tail at Killarney

Franco and Silvio Scribante's Chevron-Suzuki V8 may have been the dominant force early on in what turned out to be a sensational Campos Cape 400 Mopar South African Endurance Championship race at Killarney, but they were very lucky to win the race in the end from the Campos family, dad Rui and sons Jason and Keegan's Campos transport/Turn 1 Insurance Shelby-Ford V8 Can-Am and the reliable Fritz Kleynhans/James Forbes Cornelius Ligier JS49.

In what was in essence a battle of the families that played out in front of an impressively large and appreciative crowd on a balmy Cape Autumn's evening on mother's day weekend, the Scribante cousins stole the race win after the death, when Marcel and Dayne Angel's Autohaus Angel Ferrari 458 GT3 ran out of fuel and failed to cross the line after the three hour mark to be classified as a finisher, in spite of completing two more laps than the winning Chevron.

Most Important Rules
The two most important rules in endurance racing are to cross the finish line within five minutes of the race time elapsing and not to enter the pits once the lane is closed, five minutes before the finish. At that point five minutes before the finish, father and son, Marcel and Dayne Angel were leading the race by five laps, but the Ferrari spluttered into the pit lane with seconds to run and all the Angels could do was watch as the Scribantes struggled around to the finish after they too picked up late issues with their Chevron.

But as they say on TV - that's not all! The Mike Verier/Wayne Jardine Fantastic Racing AidCall24/7 Shelby-Nissan Can-Am, which had kept its nose clean with a solid run throughout, also spluttered to a halt with a failed alternator on the final lap to drop out of a fine podium finish as it too failed to make the flag and handed third place to the Ligier.

Cyril Ginsburg and Divan Wentzel's street-legal Porsche 911; tin-top runners up and another dad and son crew Andre and Alex Johnson's Executive Audi A4; Hennie Trollip and Clinton Thorne's baby sportscar class-winning Full Output Seven and the giant-killing Dewald Brummer/Bevan Williams MAD Racing/Fuchs Volkswagen Golf 1 GTI closed off the top ten as an impressive 18 of the 24 cars made the finish of a race that ran into the evening off a 17h30 start.

Pre Start Drama
There was drama before the start for the Angel Ferrari too, as it failed to make the warm-up laps on time and was forced to start at the back of the grid after qualifying well up behind the Scribante Chevron and Campos Shelby, which were split by a tenth of a second on the grid at sub 1 minute 10 second qualifying laps. The Chevron and Ligier battled hard up front early on, with Scheckter keeping a watching brief as Marcel Angel fought back to fourth in the Ferrari by the half-hour mark.

A dramatic battle for the tin-top lead meanwhile developed a little further back as the Bradley Scorer/Theo Van Vuuren Alfa Romeo Giulietta, the McLachlan/Winterboer GT, the Johnson Audi, the BMW M3s of Peet van der Walt/Johan Dreyer/Julian van der Watt and the amazing Brummer/Williams Golf tussled in a wrought interspersed with various sports and GT cars.

The first real drama befell the Scheckter/Parton Lamborghini, which tumbled down the order during an unscheduled stop, before the Michael Jensen/Andre Bezuidenhout Formula Renault dropped out of third at mid distance and the tin-top leading Scorer/van Vuuren Alfa Romeo also ground to a halt.

Then the Campos Shelby, which had enjoyed a monumental scrap for the lead with the Scribante Chevron, pitted with gearbox problems just before the hour mark, but the team pushed on with only second and fourth gears. The race ran smoothly for the next hour before the Chevron was delayed in the pits to hand the lead to the Ferrari. Silvio Scribante then turned in some dazzling laps in the dark to come close to catching the Ferrari, only to be delayed again and lose four more laps.

Until the Flag Flew...
Beyond that, the only major change as the race developed was the MAD Racing Golf, which had moved into a strong tin-top lead, was delayed in the pits later on to lose a few laps and positions. Beyond that, all seemed fine - until the flag flew and those last lap issues completely reshuffled the field as the leaders and third-placed cars failed to cross the line to be classified as finishers.

Unlike last year's Le Mans 24 Hour, when that Toyota lost the lead on the last lap of the actual race, the Campos Cape 400 will be remembered for the results changing well after the flag had indeed fallen. Of course it was heartbreak and agony for the Angels, Verrier and Jardine, but it was ecstasy for the Scribantes who finally got their hare to the finish line first, even if that was actually a few laps behind at the end of a quite amazing race.