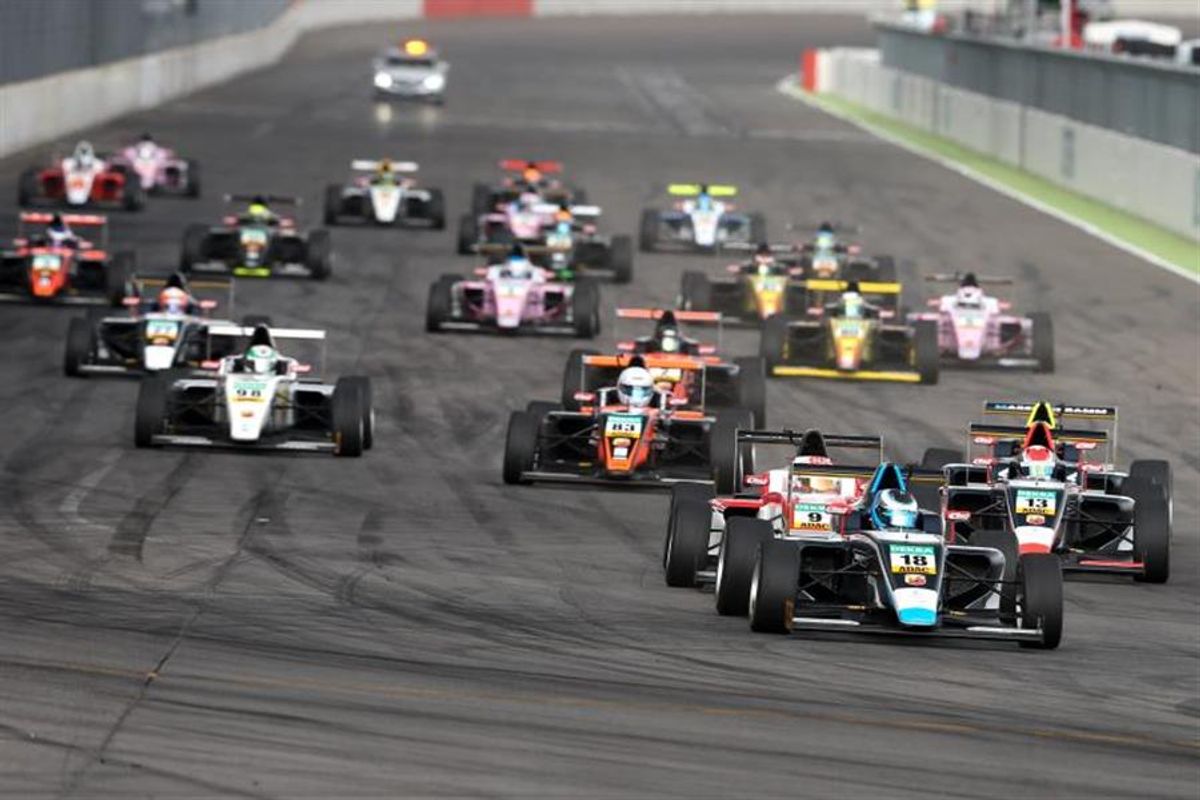 in Race 2 at the Lausitzring

Race number two at the Lausitzring and victory number two for US Racing - following the win for Kim-Luis Schramm (19, Germany) in the fourth round of the season, Julian Hanses (19) from Hilden near Düsseldorf has triumphed with a lights-to-flag victory in the second race of the weekend. He was joined on the podium by Felipe Drugovich (16, Brazil, Van Amersfoort Racing) and by Marcus Armstrong (16, New Zealand, Prema Powerteam) who received the first trophy of his ADAC Formula 4 career. The results from the races at the Lausitzring are, however, provisional and subject to the outcome of an ongoing appeal.

"It was mega," said a joyful Hanses after the victory. "I couldn't keep my emotions to myself - I had to cry. It was just an explosion of feelings. Right after the start, the car behind was relatively close, so I began to push. Eventually, I pulled out a gap and then concentrated on driving my own race."

While Hanses led the field by a margin of more than two seconds, the pursuing bunch were jostling for position. On Lap 8, the stronger Drugovich overtook Armstrong to claim second place.

For Hanses' US Racing team-mate Fabio Scherer (17), the afternoon's proceedings were a disappointment. Having started from second on the grid, the Swiss teenager was overtaken by Armstrong going into Turn 1 before also being bested by Felipe Drugovich (16, Brazil, Van Amersfoort Racing) and top of the table Juri Vips (16, Estonia, Prema Powerteam). Shortly before the end of the race, Scherer did at least manage to get past Vips to finish fourth and relegate the championship leader to fifth.

Louis Gachot (17, GB, Van Amersfoort Racing) will start from pole position in the sixth round of the season tomorrow (Sunday). Live coverage on SPORT1+ commences at 16:55 CEST. Second and third on the grid respectively are Lirim Zendeli (16, Germany, ADAC Berlin-Brandenburg e.V.) and Cédric Piro (19, Germany, Team Piro Interdental). The starting order for this race is determined by the results from Race 1. With the Top Ten lining up in reverse order, Kim-Luis Schramm will start from tenth.

Felipe Drugovich (second, Van Amersfoort Racing): "The race was really good. I was able to match Julian Hanses for pace, but he was also very fast and so the gap remained the same. My family is here and we are going to do a bit of celebrating."

Marcus Armstrong (third, Prema Powerteam): "Getting my first podium in the ADAC Formula 4 was not as easy as I had hoped. I had some problems with straight-line speed, so the podium makes me all the happier. I had to constantly fight off the challenge from Fabio Scherer and Juri Vips over the last ten laps. It could not have been more tense."

Richard Wagner (16th and Best Rookie, Lechner Racing): "On the whole, I am very satisfied. Being crowned Best Rookie is obviously the highlight of the weekend. However, I don't think that I should rest on my laurels - I have to keep going. We are all satisfied with how superb the car was."