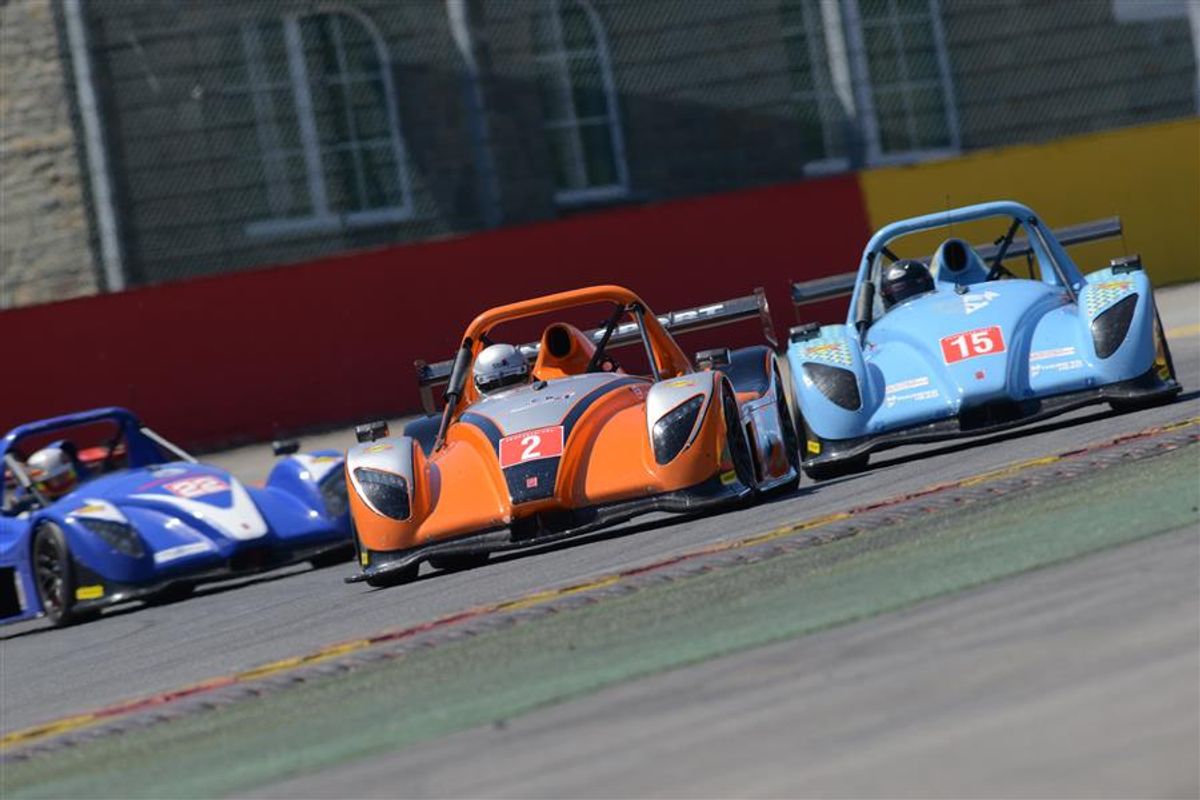 James Robinson emerged victorious with outright and Team Challenge victory in the first Radical Festival race at Spa-Francorchamps. The Scorpio Motorsport driver managed to fend off the determined intentions of Jack Lang throughout a fierce 30-minute fight to the flag which saw the top three cars, completed by invitational class winner Andrew Ferguson, covered by just 2.3 seconds after an intense 60 minutes of racing.

The 30-car field got clean away for the first rolling start of the weekend, with pole-sitter Colin Noble Jnr and Ryan Booth side-by-side into La Source. Although Noble Jnr took a brief early advantage, an alternator issue resulted in retirement at Eau Rouge, leaving Booth to lead from Jeremy Ferguson and Challenge poleman Oliver Barker. Deployment of the safety car just four laps in to retrieve Kristian Jeffrey’s car from Blanchimont, however, wiped out both Booth’s and Jack Lang’s respective class leads.

Back to green with 46 minutes to go, reigning Champ Burgess was on a mission to recover from a seven-place drop at the start. The RAW Motorsport driver climbed from eighth to fifth in a single lap amid an intense six-car fight for third, as Lang hunted down Jacques Villars and the field closed in behind. A fight within which Challenge front-runner Barker was also making progress as he fought back from a lap-one tag which demoted him to 18th place, until a run wide at Pouhon forced him down the field once more.

As the pitstop window opened, drama unfolded as leader Booth slowed and crawled into the pits, handing Ferguson the lead. The Valour Racing car came to an unfortunate halt blocking pitlane, scuppering the races of Burgess, Jackson and several others opting for an early pit.

Pitstops complete and 20 minutes remaining, Robinson led the field from Lang with Mark Richards taking full benefit of the blocked pitlane to climb from 13th to third. Andrew Ferguson, now in charge of the RAW Motorsport SR8, took up the invitational class lead.

Heading into the final 10 minutes, the lead battle was far from over with Lang lapping 0.5 seconds quicker to put the pair one second apart. The fierce fight played out with Lang mounting numerous challenges to Robinson’s excellent defense, in a tremendous display of clean racing at close-quarters, while Ferguson closed in. But a run wide from Lang at Pouhon in the final minutes ensured Robinson’s outright victory to Lang’s Solo Challenge class win, while Ferguson’s third place also sealed the invitational class spoils.

From 24th on the grid, Richards finished an outstanding fourth and second in class, ahead of Philippe Paillot’s Monza Garage SR8. Shahin Nouri completed the top six, third in the Challenge rankings, following a tremendous drive from 17th.

The bumper grid of 30 cars assembled at Spa-Francorchamps for this weekend’s Radical Festival features 41 drivers hailing from the UK Radical Challenge, Radical European Masters, plus guest racers from North America and the Middle East.