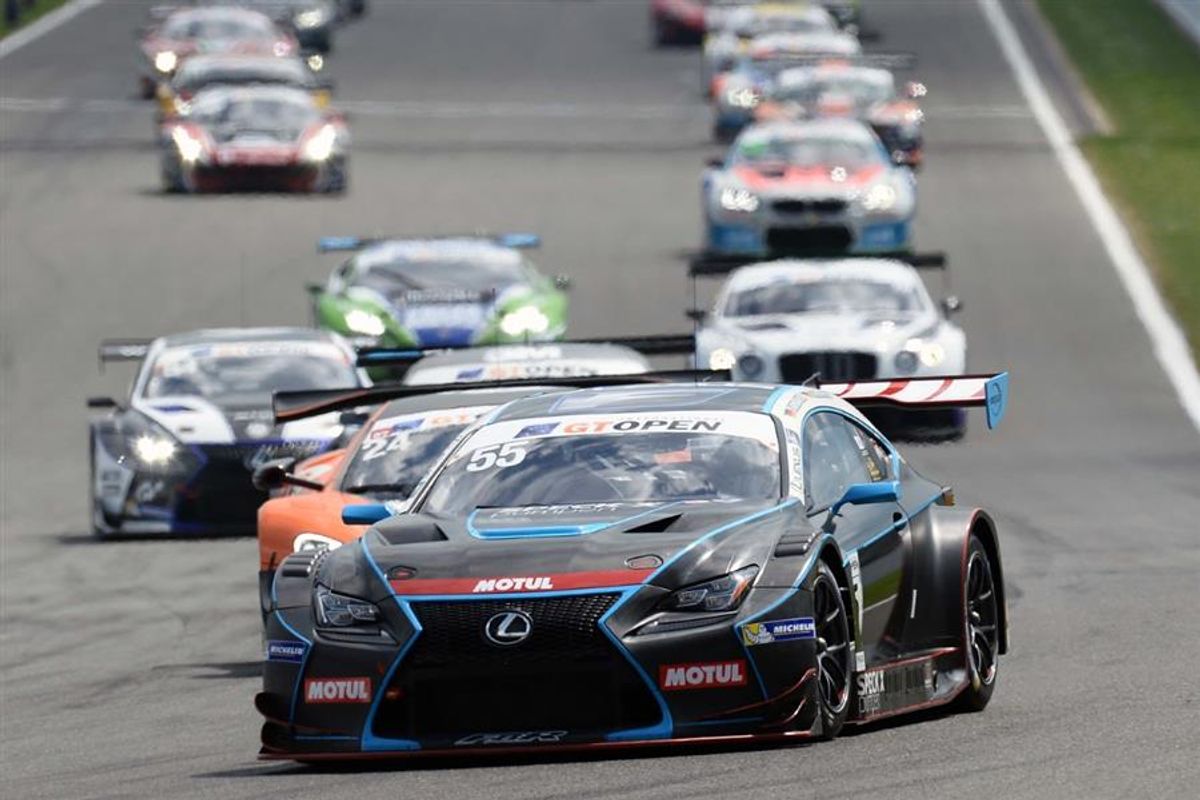 in a dramatic Race 2 finale under strong heat storm

In a repetition of the Estoril weekend, Mario and Dominik Farnbacher won Race-2 Sunday a Spa, giving the Lexus RC-F its fourth success in four races. This time, though, the German brothers emerged literally from an unpredictable final part of the race, made crazy by a heavy storm on the upper part of the track, and some intense fighting for the front positions. Heroes of the first part of the race, Vito Postiglione-Andrea Fontana, with the Imperiale Racing Lamborghini were not rewarded for their efforts.
Marco Cioci-Piergiuseppe Perazzini (AF Corse Ferrari) took a great second overall, winning the Pro-Am category ahead of the Garage59 McLarens of West-Ledogar and Benham-Tappy.
The Kaspersky Motorsport Ferrari of Alex Moiseev-Davide Rizzo repeated the success in GtAm.

The Farnbachers (with Dominik having driven a couple of stints in the Nürburgring 24 Hours on Saturday eve) are now leading by 5 points in the standings.

THE RACE – Four cars are missing on the grid as the MS Mercedes, the SF Ferrari, the Wessex Lambo and the FF Ferrari could not be repaired on time after the various accidents
in Race 1 and Qualifying 2.
It’s a smooth start with Postiglione keeping the lead from the pole ahead of Tappy, Farnbacher, Khodaie, Frommenwiler, Meadows, Venturini, Ramos and Piquet. Mario
Farnbacher is attacking Tappy for second but the McLaren resists well. Meadows passes
Khodair for fourth. In lap 4, at the Combes braking, Farnbacher eventually manages to pass Tappy, while Piquet takes P6 from Frommenwiler.
In lap 5, Postiglione leads but is under increasing pressure from Farnbacher, while Meadows is now third ahead of Tappy, Khodair, Piquet, Frommenwiler, Venturini, Cioci and
Calamia in a very compact first group, with Dejonghe leading the second part of the field.
Ramos retires in the pits (engine), as does Dejonghe shortly after (brakes). With Postiglione holding everybody, the first group remains compact and in lap 10, Meadows
takes 2nd from Farnbacher, with Khodair a close fourth, while Piquet rejoins. When the driver change window is about to close, the rain starts on the upper part of the
track, becoming quite heavy. A few drivers can make it to put rain tires, such as the
leading Lambo and Cioci, one of the last to stop, allowing Fontana and Perazzini to go back first and with rain tires. Beirao, Liuzzi, Biagi, Costa and Moiseev can’t avoid spinning but with no damage, as opposed to Ledogar, Ling and Szymkowiak. The safety-car is out although the lower part of the track is still dry.

With less than eight minutes to go, the race restarts with Fontana in the lead, chased by Dominik Farnbacher. The two have a contact at La Source as Farnbacher forces his way and Fontana tries to close the door, allowing Perazzini to take the lead half-a-lap, but the Lexus emerges and wins. Costa passes Benham for fourth and attacks Fontana sending him into a spin, earning a virtual drive-through after the race and dropping to P14. Ledogar
eventually takes 4th ahead of team mate Benham.

Mario Farnbacher: “Given what happened in the second part of the race, I had the easy
part today…My start wasn’t that great and I lost one position, but then I could climb up,
although it was impossible to pass the Lambo.”

Dominik Farnbacher: “The rain was really very heavy in the upper part of the track, at
some point you would risk aquaplaning at 20 km/h! It was difficult to stay on the track,
later we had a good fight with the Ferrari and the Lambo, hard but fair. It’s great to be
again on the top of the podium.”