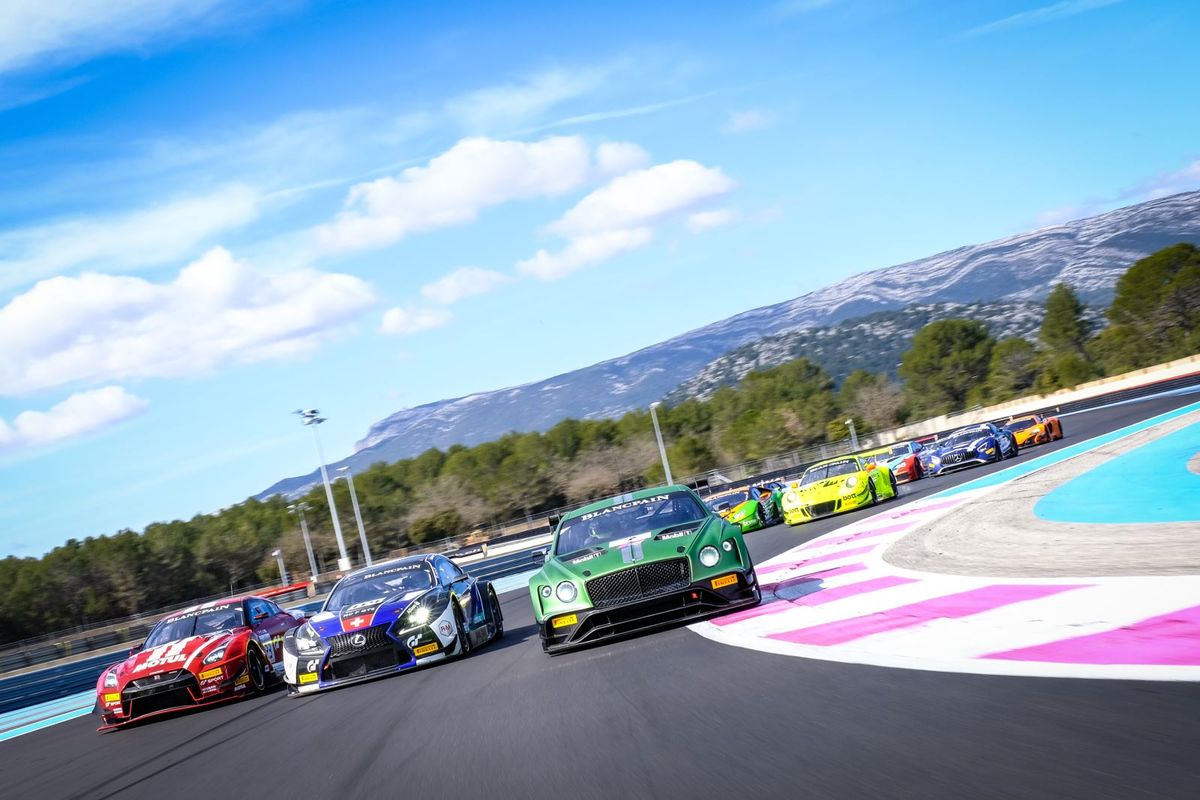 The Blancpain GT Series has finalised its full-season entry list for 2018, with no fewer than 11 major manufacturers set to be represented.

With balanced grids of professional and amateur entrants preparing to tackle the 10-round campaign, the series retains its reputation as the world’s most popular and fiercely-contested form of GT racing.

This is underscored by the impressive breadth of manufacturers who will test their machinery in the Blancpain GT Series this year, with Pro entries from Aston Martin, Audi, Bentley, BMW, Ferrari, Lamborghini, Lexus, McLaren, Mercedes-AMG, Nissan, and Porsche.

All 11 manufacturers will compete in the Endurance Cup, six of them also going across to the Sprint Cup, with entries spanning Pro, Pro-Am, Am, and the Silver Cup, which this year expands to include the Endurance category. Here is a look at the teams who will represent them in 2018.

The legendary British marque will return to the Pro ranks this year with Swiss squad R-Motorsports running a pair of Vantage V12 GT3 machines in the Endurance Cup. Aston Martin will also be represented in the new Silver Cup category by 2017 Pro-Am champions Oman Racing Team with TF Sport.

British manufacturer Bentley will campaign their brand-new Continental GT3 in the Endurance Cup this season, with two Pro class cars run by the distinguished M-Sport outfit. The marque gets further representation from Team Parker Racing, which returns to the series with renewed strength having clinched the British GT drivers’ title in 2017. The Leicestershire outfit will field a Silver Cup car in all five Sprint events and a Pro-Am effort in the Endurance rounds.

The Bavarian marque will be present in both the Endurance and Sprint Cups this term, with its BMW M6 GT3 campaigned by three teams. ROWE Racing will field a pair of Pro cars in Endurance while a further Am effort is set to be deployed by Walkenhorst Motorsport. In Sprint, French outfit 3Y Technology will chase Pro-Am honours with their M6 GT3.

The iconic Italian brand is once again well represented in the Blancpain GT Series. Pro-Am outfit Kessel Racing will field one of its 488 GT3s at every round this season, with a second car contesting the full Sprint Cup schedule in partnership with Thai effort TP12. This is complimented by additional Endurance Cup entries from SMP Racing (Pro), HB Racing (Am), and two each from AF Corse (Pro-Am) and Rinaldi Racing (Pro-Am and Am).

Having clinched the Endurance Cup and overall titles last season Lamborghini have high hopes of another stellar showing. As in 2017 their effort is led by Grasser Racing, which will field three Pro cars in the full Blancpain GT Series this season. There will be an additional two-car Endurance Cup entry from Team Lazarus (Pro-Am and Silver Cup), while Barwell Motorsport and Ombra Racing (both Silver Cup) are set to field one Huracan GT3 each. Finally, the Reiter team will compete in four Endurance Cup rounds with their Lamborghini R-EX, stepping aside for the Total 24 Hours of Spa.

After debuting the car at the Nürburgring last season, Emil Frey Racing will launch a full-scale assault with Japanese luxury brand Lexus in 2018. They will combine forces to run a pair of Pro class entries at every round, placing the squad in contention for the overall Blancpain GT Series title.

British supercar manufacturer McLaren are represented by a brace of entries from the Garage 59 outfit. They will campaign their McLaren 650S GT3 at all five Endurance Cup rounds this season, with one car contesting the Pro class and the other gunning for Am honours.

The Mercedes-AMG contingent remains strong in 2018 and is led by Auto Sport Promotion AKKA. The French squad is plotting a three-car Sprint Cup assault with two Pro class entries and one Silver Cup effort. One of their Pro cars will add an Endurance Cup campaign alongside two further Endurance efforts in Pro-Am, one in the Silver Cup, and an SMP Racing-backed Pro entry. Mercedes-AMG has additional Endurance Cup representation from the Black Falcon outfit, which will field three cars split between Pro, Pro-Am and Silver Cup. British squad Strakka Racing’s two-car effort combines Pro and Pro-Am entries, while RAM Racing will make their series debut in 2018, campaigning a Mercedes-AMG GT3 in Pro-Am.

GT Sport Motul Team RJN will continue to fly the colours for Nissan this term, with the British squad campaigning a pair of GT-R Nismo GT3 machines in the Endurance Cup. These will be split between two classes, with a Pro entry fielding the new 2018 Nismo GT3 and a Silver Cup effort using the Japanese marque’s 2017-spec car.

Porsche will make its first Pro class assault on the Endurance Cup this year, with the renowned Manthey squad set to field a car for a trio of factory drivers at all five events. The Stuttgart marque gets further Endurance Cup representation from the Herberth Motorsport team, which will deploy its Porsche 911 GT3 in the Am class.

Stephane Ratel, Founder and CEO of SRO Motorsports Group: “Firstly, I would like to thank the teams and brands who have once again placed their trust in the Blancpain GT Series. To be talking about 11 brands – all of them major players in the global automotive industry – is a real source of pride.

“The Endurance Cup remains very strong, with 50 quality full-season entries confirmed for 2018. All 11 manufacturers are represented by a minimum of two cars, with each fielding at least one Pro entry. That number will expand further for the Total 24 Hours of Spa, with a field of more than 60 cars anticipated for the landmark 70th edition of this iconic event. We also expect extra entries for the preceding Endurance Cup round at Paul Ricard, which acts as preparation for the 24 Hours.

“Despite our decision to limit the number of Pro cars I am pleased to say that the series has never been so competitive, with 11 manufacturers competing for overall honours in 2018. The field provides perfect balance, with 25 all-Pro cars complimented by a further 25 entries consisting of 12 Pro-Am, eight Silver Cup and five Am line-ups. This exceptional level of competition sets the standard in global GT racing.

“The Blancpain GT Series Sprint Cup will feature 20 full-time competitors this season. This is down from the 32 cars we had last year, but further one-off entries that have already been confirmed for selected rounds will bring us closer to the ideal number for Sprint races, which we have previously estimated at 24.

“Above all we want to remain true to the founding principles of the series: placing equal emphasis on professional and non-professional drivers to ensure full grids and a high standard of competition.

I know that we’ll deliver on that promise in 2018 and am looking forward to the opening weekend at Zolder.”