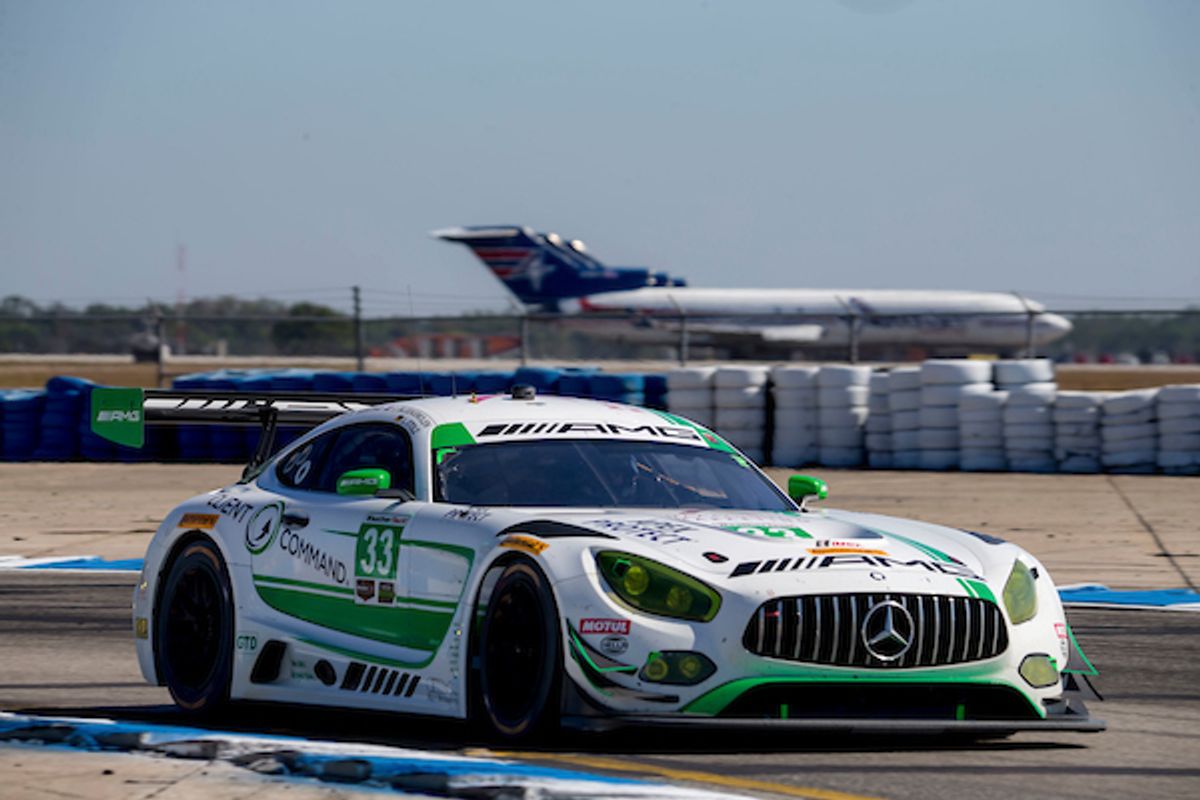 Mercedes-AMG Team Riley Motorsports and their No. 33 Mercedes-AMG GT3 finished third in the GT Daytona (GTD) class in the 66th running of the Mobil 1 Twelve Hours of Sebring on Saturday. In addition to a strong podium showing, the team earned the most points in the race’s three Tequila Patrón North American Endurance Cup (NAEC) segments to move the No. 33 team, drivers and Mercedes-AMG into the NAEC GTD season points leads.

In the NAEC standings, the No. 33 team and drivers lead the championship with 24 points, three points ahead of the nearest competitors. Mercedes-AMG is in a two-way tie for the lead in the NAEC GTD Manufacturer standings with 25 points after the solid Sebring effort.

Scoring a repeat podium finish at Sebring after winning the GTD class last year, the No. 33 Mercedes-AMG GT3 team challenged for another 12-hour victory in the final eight hours of the race. After competitive race-opening stints from Keating and Stolz, Bleekemolen drove to the lead for the first time early in the race’s fifth hour and the No. 33 battled at the front of the pack from that point until the finish.

Stolz and Bleekemolen, who drove the final stint that took the No. 33 to the checkered flag, each led the race on multiple occasions. Bleekemolen diced with the top-two GTD finishers in the race’s final hour while defending the hard-earned third-place position against a string of other competitors close behind.

At the checkered flag, the top-six GTD finishers crossed the finish line within 30 seconds of each other while the top-10 was split by just over a minute.

Completing the top-10 at the race’s conclusion was the No. 75 SunEnergy1 Racing Mercedes-AMG GT3 of Kenny Habul, Thomas Jaeger and Mikael Grenier. The team persevered through an in-race brake pad change and pit stop penalty to earn the 10th place, lead-lap finish.

No. 71 P1 Motorsports Mercedes-AMG GT3 was the third Mercedes-AMG Motorsport Customer Racing team competing at Sebring, finishing 14th in what was the first-year team’s inaugural entry in the 12 Hours of Sebring. Team owner Juan “JC” Perez co-drove the No. 71 with Kenton Koch and Loris Spinelli.

Next up for Mercedes-AMG Motorsport Customer Racing in the IMSA WeatherTech SportsCar Championship is Round 3 of the 2018 GTD Championship at Mid-Ohio SportsCar Course, May 4 – 6.

Ben Keating, Driver – No. 33 Mercedes-AMG Team Riley Motorsports Mercedes-AMG GT3: “I feel pretty good. I want to win the championship. We have been second the last few years and we want to win one. To take the lead in the NAEC is awesome, and we should be second place in points in the overall championship. Based on one manufacturer winning the two biggest races of the year, I am pretty confident there will be some rules adjustments made. I am hopeful that we will have a competitive summer with our Mercedes-AMG GT3. From a championship perspective I feel like we are in a good spot.”

Jeroen Bleekemolen, Driver – No. 33 Mercedes-AMG Team Riley Motorsports Mercedes-AMG GT3: “We had a good day. Our Mercedes-AMG GT3 just missed a little bit of speed at the end but it was a good result for the championships. It’s a podium at Sebring, which is always good, but when you come in with a win from last year, you want to repeat it, but I am pretty happy. The team did a really good job, we had good pace and I think the field is really close. It is a tough fight for everybody but that is what makes it fun.”

Thomas Jaeger, Mercedes-AMG Motorsport Customer Racing Program Coordinator and Driver – No. 75 SunEnergy1 Racing Mercedes-AMG GT3: “First of all, we are very happy to have a Mercedes-AMG GT3 on the podium. It is pretty good for the championship, a great performance, and congratulations to the No. 33 team. They did a really good job. On the No. 75 car, we had a good pace at the beginning of the race, running near the top five, but towards the end we really struggled. We didn’t find the performance in the final four hours of the race and struggled with a lot of understeer, which is why we finished 10th. The Mercedes-AMG GT3 proved once again to be very reliable, we finished, but we have to improve the performance before the next race.”

Mikael Grenier, Driver – No. 75 SunEnergy1 Racing Mercedes-AMG GT3: “Our pace was good at some parts of the race but we struggled a bit with the balance. We had some brake issues and had to change them, which normally we don’t, but the Mercedes-AMG GT3 was reliable and we finished. It is not an easy track for the car, so it is good to finish, and we will look for better luck next time.”

Kenton Koch, Driver – No. 71 P1 Motorsports Mercedes-AMG GT3: “As a team, I think everyone did a really good job. There were no mistakes on any of the pit stops – you can’t ask much more from them – and as far as the Mercedes-AMG GT3 it was reliable all the way to the end. It’s nice to just be able to drive a car without fault and drive it hard from hour one to hour 12. I am really happy with everything, we are still kind of learning how to get the car working, so we didn’t have the ultimate pace. As the sun was setting, the car got a lot better and we were much happier at the end with it. Come the next round of the NAEC at Watkins Glen we will be in much better shape with it.”